Kurt Busch picked up the 10th last-place finish of his NASCAR Cup Series career in Saturday’s Federated Auto Parts 400 Salute to First Responders at the Richmond Raceway when his #1 Monster Energy Chevrolet was involved in a single-car accident after 40 of 400 laps.
The finish, which came in Busch’s 748th series start, was his third of the season and first since the Coca-Cola 600, 13 races ago. In the Cup Series’ last-place rankings, it was the 39th for the #1, the 620th from a crash, and the 814th for Chevrolet. Across NASCAR’s top three series, it was the 70th for the #1, the 1,271st from a crash and the 1,804th for Chevrolet.
Busch’s last-place run in the 600 kicked-off a strong late-season rally where he finished no worse than 20th in the final 11 races leading into the Playoffs. A 4th-place finish at Road America was followed by a breakthrough win in Atlanta, the final race on the track’s aging 1997 surface. The win came thanks in part to teammate Ross Chastain, who held up brother Kyle Busch during their battle for the lead. Kurt ran just as strong in the races that followed, finishing no worse than 16th, and in the Playoff opener at Darlington took home a strong 6th. He’d line up 4th at Richmond, matching his current rank in points. He entered the race 54 points back of leader Kyle Larson, but only 26 points ahead of the cutoff.
Rolling off 37th and last was J.J. Yeley, who returned to the Cup garage in Rick Ware Racing’s #53 Fat Boy Chevrolet. Yeley would be joined in the back by Kyle Larson, whose #5 HendrickCars.com Chevrolet was slated to start in first place before it failed pre-race inspection. Also dropping to the rear was Cole Custer, whose #41 HaasTooling.com Demo Day Ford had originally lined up 21st. Custer was last across the stripe, 3.853 seconds back of the leader and three-tenths back of Larson.
When the race started, Martin Truex, Jr. inherited Larson’s first-place spot in the #19 Bass Pro Shops Red White & Blue Toyota, but crossed the line ahead of his teammate Denny Hamlin, the outside-polesitter. This resulted in a pass-through penalty Truex served under green on Lap 4, dropping him to last place behind Garrett Smithley. Smithley, who drove in relief of Cody Ware following carbon monoxide poisoning in Darlington, had taken last on Lap 1 in the #51 9/11 Chevrolet. When Truex returned to the track, he was 9.680 seconds back of Smithley. Truex made up that interval in around 12 laps, dropping Smithley to last again by Lap 16.
On Lap 21, Smithley was the first driver to lose a lap to the leaders, and he held the spot until Lap 34, when Quin Houff took over the spot during pit stops under the competition caution. Houff’s #00 Trucker Appreciation Chevrolet held the spot until the field passed the “Choose Cone,” pulling Houff ahead of Joey Gase in the #15 Donate Life VA Chevrolet. On the restart, Gase was still battling Houff for the last spot when the caution fell once again.
In the early laps, Kurt Busch was still among the leaders, and took over the lead with a fast pit stop under the competition caution. On that Lap 37 restart, footage showed the left-rear tire had the “Goodyear” logos rubbed off the sidewall, and the tire appeared soft. On Lap 41, Busch had dropped to 3rd place, and was dealing with a loose condition. Heading into the first corner, the left-rear tire cut down, sending him spinning into the outside wall. Busch smacked the wall nearly flush with the driver’s side, but eventually climbed out under his own power. His car was towed to the garage, done for the night. He’d finish the race tied with Alex Bowman for the Playoff bubble headed into the first elimination race next Saturday in Bristol.
Just like the spring Richmond race, only the last-place finisher fell out of the race with the rest of the field completing the distance within nearly the same number of laps of the leader – 16 in the spring, and 15 on Saturday. The 36th spot fell to Josh Bilicki in the #52 Firetruck Scheme Ford, one lap behind Houff and Yeley. Another lap ahead came 33rd-place Gase, who rounded out the Bottom Five.
LASTCAR STATISTICS
*This was the first time the #1 finished last in a Cup race at Richmond since May 3, 2003, when Steve Park’s #1 Pennzoil Chevrolet crashed after 42 laps of the Pontiac Excitement 400. This was the same race weekend where Jerry Nadeau suffered his career-ending crash in the same corner where Kurt hit on Saturday.
*This marked the first time in Kurt Busch’s career that he’s finished last in a Cup race on a track less than one mile in length, and only the second time he’s finished last on a track shorter than 1.5 miles.
THE BOTTOM FIVE
37) #1-Kurt Busch / 40 laps / crash
36) #52-Josh Bilicki / 385 laps / running
35) #00-Quin Houff / 386 laps / running
34) #53-J.J. Yeley / 386 laps / running
33) #15-Joey Gase / 387 laps / running
2021 LASTCAR CUP SERIES OWNER'S CHAMPIONSHIP
1st) Rick Ware Racing (5)
2nd) JTG-Daugherty Racing, Stewart-Haas Racing (4)
3rd) Chip Ganassi Racing, Spire Motorsports (3)
4th) Front Row Motorsports, Motorsports Business Management (2)
5th) Hendrick Motorsports, Joe Gibbs Racing, Roush-Fenway Racing, StarCom Racing (1)
2021 LASTCAR CUP SERIES MANUFACTURER'S CHAMPIONSHIP
1st) Chevrolet (16)
2nd) Ford (9)
3rd) Toyota (3)
2021 LASTCAR CUP SERIES DRIVER'S CHAMPIONSHIP 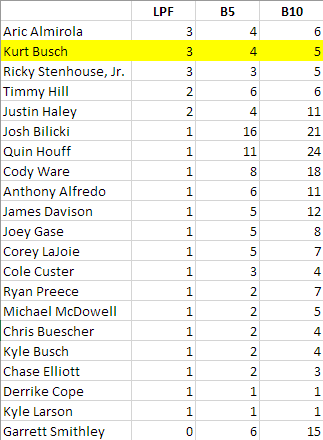