by Ben Schneider
LASTCAR.info Guest Contributor
Paul Pedroncelli finished last for the 3rd time in his ARCA Menards Series West career in Thursday's Star Nursery 150 at the Las Vegas Motor Speedway Bullring when his #31 Pedroncelli Mobile Bottling Chevrolet suffered brake issues after three laps.
The finish came in Pedroncelli’s sixth career start and was also his third last-place finish in the last four races.
While Pedroncelli’s first laps as a driver came earlier this season at Sonoma, his family has been involved with the West Series for over a decade. His son, Paul Pedroncelli Jr. (better known as “P.J.”), is a series veteran whose debut came in the then-Camping World West Series at Irwindale in 2008. P.J. continued to compete part-time with his father as his crew chief until 2011, when they moved to local divisions as the West Series became too expensive for their family team.
The Pedroncellis started their own mobile wine bottling company in 2014, a business that provided P.J. the opportunity to return to the West Series at their home track of Sonoma two years ago. P.J. had also intended to run the Sonoma race in the series in 2020 before its cancellation due to the COVID-19 pandemic. This season, P.J. elected to make the jump to full-time West Series competition, while Paul has also joined his son on the track in every race so far save for the season-opener at Phoenix. P.J. has enjoyed a good amount of success with a pole at Irwindale and three top-three finishes through seven races.
Currently, the Pedroncellis have three cars on hand: a road course car, a short track car, and a backup car driven by Paul Sr. While the father-son duo hardly has a budget comparable to top teams in the series such as Bill McAnally Racing or Sunrise Ford Racing, they are a team that embodies what ARCA is all about: giving part-time racers an opportunity to not only live their dreams, but also to enjoy success.
BMR’s Amber Balcaen followed up the running order in twenty-second as she fell out after 20 laps due to crash damage. Amber Slagle, who suffered contact with the wall in the first corner on the opening lap, lasted 53 laps before her radiator gave out. Bridget Burgess completed two further laps before being taken out in a crash, while series veteran John Wood rounded out the Bottom Five, retiring with radiator issues of his own after 69 laps in Kart Idaho's #08.
Balcaen, Slagle, and Burgess made up three of five female drivers in the race, believed to be a record for the most women ever to compete in a single West Series event. The other two - Mariah Boudrieau and Jolynn Wilkinson - followed up the running order in 18th and 17th respectively. Boudrieau retired with crash damage after 112 laps while Wilkinson was the only woman of the five to be running at the finish, completing 127 of 150 laps after her crew spent time repairing crash damage of her own.
THE BOTTOM FIVE
23) #31-Paul Pedroncelli / 3 laps / brakes
22) #19-Amber Balcaen / 20 laps / crash
21) #17-Amber Slagle / 53 laps / radiator
20) #88-Bridget Burgess / 55 laps / crash
19) #08-John Wood / 69 laps / radiator
2021 LASTCAR ARCA MENARDS SERIES WEST MANUFACTURERS CHAMPIONSHIP
1st) Chevrolet (6)
2nd) Toyota (1)
3rd) Ford (0)
2021 LASTCAR ARCA MENARDS SERIES WEST OWNERS CHAMPIONSHIP
1st) Pedroncelli Racing (3)
2nd) Young’s Motorsports, Rodd Racing, Kart Idaho Racing, Performance P-1 Motorsports (1)
2021 LASTCAR ARCA MENARDS SERIES WEST DRIVERS CHAMPIONSHIP 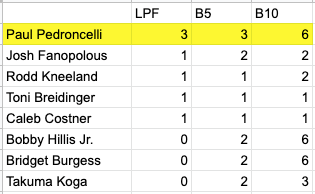