ARCA WEST: Costner’s series debut ends before it can begin

by Ben Schneider
LASTCAR.info Guest Contributor
Caleb Costner finished last for the first time in his ARCA Menards Series West career in Saturday’s Portland 112 at Portland International Raceway when his #77 Jan’s / Thin Blue Wine Cellars Toyota did not start the event.
The finish came in Costner’s series debut.
A native of North Carolina, Costner serves as a deputy sheriff in Gaston County. A lifelong racing fan, Costner began his career racing four-cylinder dirt cars before transitioning to asphalt. He currently competes in the Carolina Pro Late Model Series.
Costner joined veteran series owner Joe Nava’s team for the Portland race with a car that paid tribute to the 13 American military service members who lost their lives in the August 26 terrorist attack in Kabul. Costner’s only on-track appearance throughout the weekend came in the first practice session, where he placed fifteenth of eighteen drivers on the timing chart.
The official scoring sheet listed Costner as the eighteenth-place finisher with a status of “did not start.” The first driver to actually take the green flag and fall out of the race was series veteran Todd Souza, whose car initially coasted to a stop on the pace laps. Souza’s team attempted to repair the car’s mechanical troubles behind the wall before eventually retiring from the race altogether with only three total laps completed.
Bridget Burgess followed up the finishing order in sixteenth, completing 51 of the race’s 58 laps. After some early contact, Burgess climbed to as high as fourth in the running order before spinning out with Bobby Hillis Jr. late in the race. Burgess subsequently retired from the race, telling GRID Network’s Joe Samaniego that a spark plug wire failure led to her early exit.
Despite their struggles this weekend, Souza and Burgess have both enjoyed past road course success in the West Series. Souza’s lone career victory came in 2008 at Utah Motorsports Campus, then known as Miller Motorsports Park. Burgess, whose family-run team frequently spends time testing at the Utah track, had one of the best runs of her young career at Sonoma Raceway earlier this season. She ran as high as fifth and finished eighth in the twenty-two car field.
The Bottom Five was rounded out by Hillis and Dave Smith, who suffered a fuel issue on the final lap of the race.
Costner’s last-place finish also marked the first LPF for a Toyota this season, breaking Chevrolet’s streak of five consecutive to open the season.
THE BOTTOM FIVE
18) Caleb Costner / 0 laps/ did not start
17) Todd Souza / 3 laps / fuel
16) Bridget Burgess / 51 laps / mechanical
15) Bobby Hillis Jr. / 57 laps / running
14) Dave Smith / 57 laps / fuel
2021 LASTCAR ARCA MENARDS SERIES WEST MANUFACTURERS CHAMPIONSHIP
1st) Chevrolet (5)
2nd) Toyota (1)
3rd) Ford (0)
2021 LASTCAR ARCA MENARDS SERIES WEST OWNERS CHAMPIONSHIP
1st) Pedroncelli Racing (2)
2nd) Young’s Motorsports, Rodd Racing, Kart Idaho Racing, Performance P-1 Motorsports (1)
2021 LASTCAR ARCA MENARDS SERIES WEST DRIVERS CHAMPIONSHIP 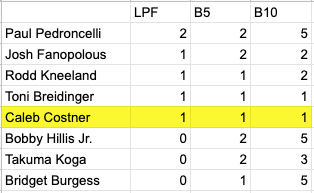