Mason Diaz scored the 1st last-place finish of his ARCA Menards Series career in Thursday’s Bush’s Beans 200 at Bristol Motor Speedway when his #74 Solid Rock Carriers did not finish the race due to battery issues, completing 2 of 200 laps.

Mason Diaz has been an interesting case in the “backwards is forwards” train of thought. He climbed the traditional ranks of go-karts, Bandoleros and Legends cars before moving on to full-bodied cars. Conveniently, his father, Michael Diaz, co-owns a track, Southern National Motorsports Park. The North Carolina venue was a natural proving ground for a young Diaz, and as early in 2015, Mason was making starts in regional touring series. In 2017, Diaz teamed up with Brandonbilt Motorsports to make his Truck Series debut at Martinsville. The pairing was a good fit, as Brandonbilt team principal Jerry Brown was the other co-owner of Southern National. After qualifying an impressive ninth, Diaz scored stage points in the first stage before a cut tire plagued the rest of his race.
In 2018 and 2019, Diaz made sporadic XFINITY starts for Brandonbilt, scoring a 19th-place finish in his series debut at Richmond. That same year, the Diaz family made a go of running for the then-NASCAR K&N Pro Series East championship, making it four races in to the twelve-race schedule before halting the effort. In 2020, Diaz signed with Venturini Motorsports to contest a now shorter East schedule and secured fifth place in the point standings. With that season done, he also ran the final two XFINITY races of the season with Sam Hunt Racing, again finding success at Martinsville. In advance of 2021, Diaz chose to run another year in the East series, focusing on driver development rather than jumping to a higher series. He signed with Visconti Motorsports, a team that did not make it through the year with driver Giovanni Bromante. The pairing yielded considerable success - heading into the season finale for the East Series at Bristol (which happened to be a combination race with the national series), Diaz was still within mathematical contention for the championship, albeit a long shot.

All 31 cars took a time in practice. Ty Gibbs was the only driver to break the 15-second barrier, and on the other end of the speed charts, Don Thompson’s Wayne Peterson Racing entry was the only car in the 19-second bracket. Qualifying was much of the same, with Gibbs and Sammy Smith securing a Joe Gibbs Racing lockout of the front row and Thompson alone in Row 16. Diaz was solidly mid-pack, clocking in at 15th-quickest in practice and qualifying 12th.

The race had barely started when a caution flag flew on Lap 2. Diaz ducked on to pit road during the caution and never emerged, done for the evening. Don Thompson’s race was done after a black flag for a lack of speed was shown early in the race. Sam Mayer, already in a backup Bret Holmes Racing entry from earlier in the day, found contact with Jason Kitzmiller and retired less than a quarter of the way in to the race. D.L. Wilson and Stephanie Moyer rounded out the Bottom Five. 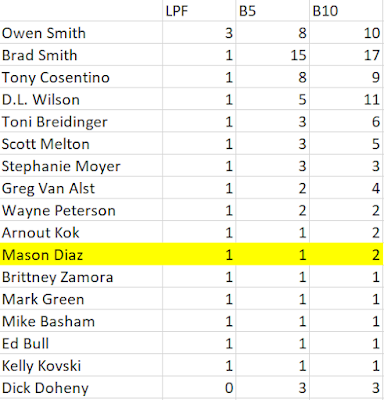