Kelly Kovski finished last for the first time in his ARCA Menards Series career in Sunday’s Southern Illinois 100 at the DuQuoin State Fairgrounds Racetrack when his #16 Schluckebeier Farms Chevrolet did not start the race.

Kelly Kovski's name is a familiar one to longtime ARCA followers. The Springfield, Illinois native made his series debut in 2004 for Andy Hillenburg’s Fast Track Racing and was a crew member of Justin Allgaier’s ARCA team in the mid-to-late 2000s. A dirt racer in the stock car and modified ranks, Kovski continued to make ARCA starts on the dirt throughout the 2010s, not finishing outside the top ten from the end of 2009 to mid-2013. While Kovski traditionally ran with Roulo Brothers Racing, he switched to the Allgaier Racing team for 2012 and has stuck with the #16 car since then.
However, in early 2017, Kovski was badly injured at Volusia Raceway Park when a sprint car barreled into the pit area. He emerged from a coma two and a half weeks later, and Grant Enfinger took the wheel of the car as he recovered, winning at Springfield. Kovski returned for the dirt races in 2018 and still had not finished outside of the Top Ten from then until the end of 2020. Justin Allgaier took over the #16 for this year’s first dirt race, at Springfield, and the owner name changed from Mike Allgaier to Roy Kovski, signaling a changing of the guard. Kovski reassumed driving duties for DuQuoin, ready to perhaps follow in Ryan Unzicker’s footsteps and pull a surprise win on the field.

Fifteen other cars joined Kovski's on the entry list for the second and final dirt race of the season. Noticeably absent was Daniel Dye, whose GMS Racing entry has run part-time on the short tracks. Thad Moffitt also missed the race, as he was unable to secure funding for his David Gilliland Racing ride. Richmond-Clubb Motorsports also debuted a new face, as former Wayne Peterson Racing driver Zachary Tinkle debuted with the Latino Immigration Center as sponsor. A few dirt ringers filed entries, as Unzicker made his return with Hendren Motorsports, Will Kimmel entered with his own team, and Landen Lewis returned for the Rette Jones Racing with Austin Theriault Driver Development team using owner points from Rev Racing. Ken Schrader also hopped behind the wheel of a Fast Track Racing car as part of a loaded racing weekend which saw him take part in all three races contested on the mile-long oval. Venturini Motorsports brought in Toni Breidinger and Jesse Love for its cars, and Fast Track Racing filled out its team with Tim Monroe, Owen Smith and D.L. Wilson.

Fifteen of the sixteen entrants took time in practice, with Kimmel the only one left out. Wayne Peterson was slowest, as his only timed lap was a minute and 17 seconds long, equating to about 47 miles per hour. Jesse Love led the charts and Kovski was second, but both cars found trouble in the session. Heavy rains made the track extremely heavy, and while Love’s team was able to put a new front end on (one that looked suspiciously like an old Michael Self nose), Kovski’s team elected to withdraw the entry. While Kovski was not listed on the TrackPass leaderboard, he was listed on the official scoresheet as a “did not start”.

The decision to withdraw, in hindsight, was probably a good one. Peterson’s entry also did not make the starting grid, and both Brad and Owen Smith retired in the first ten laps. Toni Breidinger rounded out the Bottom Five, done after 35 laps. The track monster kept on claiming victims, most notably Corey Heim, who tied his worst result of the year in seventh after spending significant time on pit road after he went airborne in the middle of the turn. 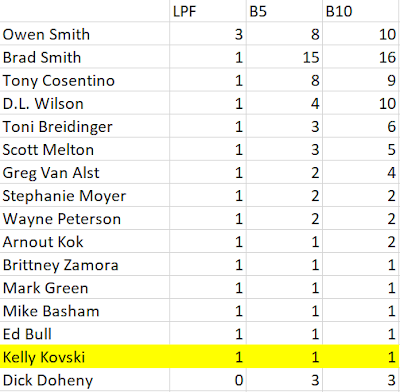