Tony Cosentino scored the 1st last-place finish of his ARCA Menards Series career in Friday’s Henry Ford Health System 200 at the Michigan International Speedway when his #01 unsponsored Chevrolet did not start the race.

Tony Cosentino has followed dual paths in the racing world. On the one side, he has served as a crewman for Stewart-Haas Racing, Rick Ware Racing, and the infamous Obaika Racing, where he was the Director of Pit Crew Development. On the other, he has worked his way through the late model ranks, and made three NASCAR K&N Pro Series West starts in 2019. Before 2021, Cosentino founded his own team in the Carolina Pro Late Model Series, aiming to be a driver development team in the series. He also made his ARCA debut for Fast Track Racing at Toledo in May, retiring with handling problems after 11 laps. In his only full race so far, at Winchester, Cosentino turned in a 10th-place finish, a highlight amidst a string of start-and-park efforts this year.

With 20 cars entered at Michigan, this year’s field was the biggest for an ARCA race at the track since 2018. Sam Mayer returned to Bret Holmes Racing, and Gracie Trotter continued her partial slate with Venturini Motorsports. Greg Van Alst, Scott Melton and Jason Kitzmiller filled out the superspeedway brigade, and Kyle Sieg ran another race with his family team. Zachary Tinkle teamed up with Wayne Peterson Racing for another ARCA effort, and Tim Richmond strapped in to the Richmond-Clubb Motorsports entry again. Jeffrey MacZink returned with his family team to make his first series start in four years, and Connor Mosack made his series debut, teaming with Young’s Motorsports. Fast Track Racing filled out its team with D.L. Wilson, Morgen Baird, who is a traditional Michigan driver for the team, and Brandon Varney, another Michigan native.

Only 18 cars took a time in practice, with MacZink and Cosentino remaining in the garage. Wilson was the slowest of cars that ran, clocking in at 47.8 seconds - nine seconds off of Ty Gibbs’ session-leading pace. There was no scheduled qualifying, leaving the lineup to be set by owner points. MacZink, with no points either this year or last in his #65 entry, was set to roll off last.

During the pre-race ceremonies, timing and scoring never picked up Cosentino’s entry as on-track, and the 01’s blank white car was conspicuously absent from the inside of the sixth row of the starting grid. Despite the car never seeing the track, it was still listed in the official results as having participated in the event, albeit with 0 laps complete.

Wilson was the first car that took the green flag to exit the race, falling victim to oil line issues after eight laps. Drew Dollar and Tim Richmond were 18th and 17th after Thad Moffitt punted Dollar in the middle of turn three, who then slammed Richmond as both headed towards the outside wall. The move came as retaliation for an incident on the first lap of the race, when Dollar pushed Moffitt up into the outside wall in turn four. Richmond got the worst of it, with a thoroughly destroyed racecar, a mangled pinky finger, and a broken leg and ankle.

As I wrote in 2018, ARCA has long been far too lenient with a “boys-will-be-boys” attitude. The court of public opinion already turned against the series following the Berlin event earlier this season, in which Taylor Gray dumped Daniel Dye on the frontstretch and gave the driver of the 21 a concussion. This latest incident is just another ugly black eye on a series that has way too many in the past half-decade. Tim Richmond had nothing to do with this feud at all, and his small team now has a destroyed racecar and a driver that is out of action for the foreseeable future. Meanwhile, Dollar moves on to his next Truck Series start with Kyle Busch Motorsports and Moffitt will continue to drive for David Gilliland Racing on a partial schedule this year, unaffected by the incident. One is an anomaly, two is a coincidence, and if no message is sent by the sanctioning body, the next step in the old adage is that three is a pattern – and people who want to see intentional wrecks go to Bowman Gray, not your weekly ARCA race.

Mosack rounded out the Bottom Five, his series debut hampered by fuel pump issues. The Young’s Motorsports team, however, was complimentary of the Ilmor representatives at the track for their quick diagnosis and work on the issue. 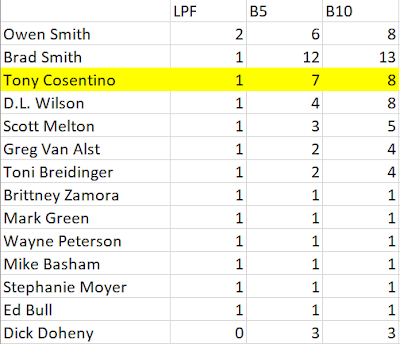