Owen Smith picked up the 5th last-place finish of his ARCA Menards Series career in Saturday’s Calypso Lemonade 200 at Winchester Speedway when his #01 ThePedalinPup.com Ford retired with electrical problems after completing 4 of the race’s 200 laps.

The finish came in Smith’s 17th series start, and was his first since Toledo earlier this year, seven races ago.

Since he was last featured here, Smith has continued to plug away in the ARCA Menards Series for Fast Track Racing, running five of the last seven series events. He picked up some midseason backing from Academy Mortgage and Szulczewski Financial Group, and ran full races at Charlotte and Berlin, recording a career-best ninth at the latter. Smith also pulled the iconic ARCA “crew chief for yourself” role for start-and-park efforts at Elko and Mid-Ohio.

An average 17-car field took the track at Winchester. Near the front of the field, two Venturini Motorsports entries fielded unfamiliar faces: sports car driver Parker Chase returned to the 15 for one of his sporadic starts, and Toni Briedinger reunited with her former team for the first of five scheduled races in the 25 after abruptly leaving the Young’s Motorsports camp. Greg Van Alst returned to ARCA for his hometown race, even carrying primary sponsorship for the Winchester 400 super late model race happening later this year. Kris Wright took the place of Max Gutierrez in Rette Jones Racing’s #30 car, and Alex Clubb returned for another one of his scheduled races in the Richmond-Clubb Motorsports car. Wayne Peterson Racing fielded Zachary Tinkle for another race, and Fast Track Racing fielded Tony Cosentino and D.L. Wilson for another race. They also fielded the lone series debut on Saturday night, Brandon Varney. The Richmond, Michigan product has raced super late models for years and this year joined the new Bill McAnally Racing Drivers’ Academy on the west coast, looking to make the transition to heavier stock cars.

After a string of recent races where he was at the bottom of the charts in practice, Brad Smith wound up 14th on the charts, outrunning last place by over a second. In last place was Clubb, less than a tenth of a second under the 20-second mark. The pilot of the 27 car picked up seven-tenths in qualifying and moved up to 16th, dropping Owen Smith to last, who qualified with a lap of 19.434 seconds.

Despite posting the 17th-fastest time, the #01 lined up as the eighth car in the outside row, as Brad Smith dropped to the back of the field. However, the 48 quickly dropped #01 to last, although the cars remained within sight of each other. Both cars were lapped on the backstretch while the leaders worked Lap 5, and the broadcast showed Owen Smith dropping on to pit road as the leaders came around to begin Lap 6. He was listed as off on Lap 7, and was declared out on lap nine.

Brad Smith and Clubb both fell victim to mechanical issues - Clubb in particular dropped two power steering belts in the opening stages of the race. The Bottom Five was filled by Daniel Dye and Nick Sanchez, both eliminated in a vicious crash that began when Taylor Gray turned Dye head-on into the frontstretch wall on lap 84.

Besides the last-place finish, it was otherwise a banner night for Fast Track Racing. Despite falling out of the race, D.L. Wilson avoided a bottom-five finish. Tony Cosentino ran his first full race in his sixth career start and notched a tenth-place finish. Varney wheeled the team’s flagship #10 machine to a sixth-place finish, outrunning two of the three Venturini Motorsports cars in the field in a monumental finish for Fast Track, rivaled this year perhaps only by Mason Mingus’ run with the team. 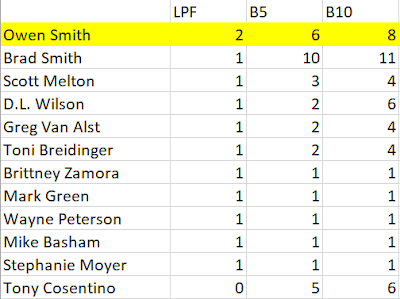