Owen Smith finished last for the sixth time in his ARCA Menards Series career in Sunday's Allen Crowe 100 at the Illinois State Fairgrounds when his #01 Fast Track Racing Chevrolet exited after 5 of the race’s 100 laps with clutch problems.

The finish was Smith’s first since Winchester, three races ago, and came in his 18th series start.

Springfield saw Smith back behind the wheel for the first time since Winchester earlier this month, where carburetor issues hampered the team and led to a last-place finish. Driving the Fast Track Racing #01 at Springfield, Smith took the place of Tony Cosentino, who did not start the race at Michigan and finished last.

Several dirt ringers highlighted the entry list for the back end of a weekend doubleheader for the ARCA Menards Series. Last year’s winner, Ryan Unzicker, returned to defend his win with Hendren Motorsports, and NASCAR Xfinity Series driver and former ARCA champion Justin Allgaier hopped behind the wheel of the Kovski Racing car annually driven by Kelly Kovski. Will Kimmel, once a frequent competitor in ARCA, made his first start of the season with his family team. Jesse Love and Toni Breidinger filled out the Venturini Motorsports stable, and DGR-Crosley was down to just one car, as Taylor Gray took over the wheel of the 46 machine since Thad Moffitt was unable to secure sponsorship for this race. Zachary Tinkle entered his fourth race with Wayne Peterson Racing, and Alex Clubb, who had three previous Springfield starts, ran for his Richmond Clubb Motorsports team. Fast Track Racing fielded Tim Monroe in the flagship #10 car, D.L. Wilson in the #12 car, and Canadian racer Mike Goudie in the #11 car, who made his first series appearance since 1995. Rev Racing elected to take Nick Sanchez off of a full-time schedule and instead loaned its #2 owner points to Rette Jones Racing, who fielded an entry for Landen Lewis’ series debut. Lewis comes to the ARCA Menards Series following success most notably in the hotly contested Legends circuit in the Southeast.

Only 14 of the 16 entered cars took time in practice with Owen Smith and Zachary Tinkle not completing a lap. Unzicker picked up right where he left off, leading the session, while Brad Smith trailed the field, just over five seconds slower than Unzicker. In qualifying, it was Brad Smith who was the only car to not make a lap, while Tinkle was the slowest of the cars that did, running about four seconds slower for the mile lap than polesitter Corey Heim.

The last row was one of Smiths, as even though Owen Smith qualified 12th, he elected to drop to the rear of the field along with Brad Smith. The 01 and 48 settled into 15th and 16th, respectively, until Smith pulled off the track on Lap 6, done for the day. The rest of the Bottom Five was filled out with mechanical issues, as Alex Clubb, Brad Smith, Ryan Unzicker and Zachary Tinkle all exited the race before the halfway point.

The weekend for Fast Track Racing ended with a terrible hauler fire on Sunday night. While traveling back to the shop along Interstate 24, one of the trailers caught fire, and while no one was injured, team owner Andy Hillenburg reported that a lot of the team’s equipment was destroyed. However, in the next breath, Hillenburg promised to be at the next race, in Milwaukee in a week’s time. 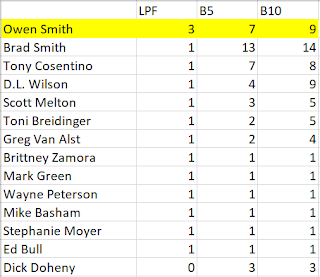