Arnout Kok scored the first last-place finish of his ARCA Menards Series career in Sunday’s Sprecher 150 at the Milwaukee Mile when his #10 Brand South Africa / International Rhino Foundation Toyota did not start the race.

A native of South Africa, Arnout Kok started his racing career in a way many American drivers do - piloting go-karts. From there, Kok rose through the single-seater ranks, driving Formulas Asia, Ford, Turkish, Junior and GTI. He later made his way to closed-fender cars, working through Legends cars before going to late models, and eventually won the 2017 European Late Model championship.
In 2018, Kok announced his United States racing debut with Obaika Racing in the then-NASCAR K&N Pro Series West at the Las Vegas Dirt Track. The effort was hailed as “Team Africa” by driver and team, and the described livery would shine bright with South African and Nigerian flags in honor of Kok and team owner Victor Obaika. Former Haas F1 sponsor Rich Energy was also listed as an associate sponsor in promotional materials. However, on the day of the race, an unnamed team that Kok and Obaika contracted with to procure a turnkey car did not fulfill the agreement, and the team withdrew. Despite indications of future plans for Kok, that announcement never came, and in less than a year, Obaika was out of NASCAR entirely. So was Kok, who did not compete in any national United States series for the next two years.
Enter Andy Hillenburg at Fast Track Racing, who this year brought Kok on board for the Mid-Ohio and Watkins Glen events on the ARCA schedule. Brand South Africa funded the first two efforts, and the International Rhino Foundation, based out of North Texas, hopped on board for Milwaukee.

Since Milwaukee was a combination race with the ARCA Menards Series East, several drivers joined the series regulars. Sammy Smith, Joey Iest, Parker Retzlaff, Rajah Caruth, Max Gutierrez and Mason Diaz all are primarily running for East points this year. Sam Mayer returned to Bret Holmes Racing to find some magic, and Connor Mosack continued his part-time slate with Young’s Motorsports, perhaps in advance of some higher-level starts next year. Venturini Motorsports filled out its lineup with Jesse Love and Gracie Trotter, and Kok's teammates at Fast Track Racing were Tony Cosentino, Jason Miles and Stephanie Moyer. Independent drivers Eric Caudell and Ron Vandermeir Jr. rounded out the field, the latter coming off of an impressive run in his series debut at Elko.
All 24 entries participated in practice. The Joe Gibbs Racing tandem paced the field, rounded out by Brad Smith, whose lap of 34.8 seconds was about 5.3 seconds off of Sammy Smith’s fast time. In qualifying, three cars didn't take time: the Richmond-Clubb Motorsports entry of Alex Clubb, the Bruce Cook Racing entry of Parker Retzlaff, and the Kok's Fast Track Racing entry. Kok later said on social media that engine issues were to blame for the car’s demise, and that he never made it to the starting grid. Interestingly enough, photographs from Sunday indicate that the 10 machine had a nice stripe on it and spent time on pit road with the hood up during the day. Also, the co-primary sponsor was not Brand South Africa, but Polar Bear Coolers. Former Obaika Racing sponsor Space Grill also had a large decal on the quarter panel to compliment the Rhino Foundation on the hood.
Had the #10 car made the grid, the last-place finisher likely would have been Cosentino, who fell out with a vibration after completing eight laps. Smith and Caudell also fell out early with mechanical issues. No cars fell out of the race due to crash damage, although Stephanie Moyer rounded out the Bottom Five after an incident with Corey Heim. Heim punted Moyer coming off of turn two on lap 118, and although no ankles were broken and no concussions were suffered, it is again disappointing to see such reckless abandon coming from talented racecar drivers who should know better than that.
THE BOTTOM FIVE
24) #10-Arnout Kok / did not start
23) #11-Tony Cosentino / 8 laps / vibration
22) #48-Brad Smith / 14 laps / handling
21) #7-Eric Caudell / 31 laps / radiator
20) #12-Stephanie Moyer / 139 laps / running
2021 LASTCAR ARCA MENARDS SERIES MANUFACTURERS CHAMPIONSHIP
(NOTE: Standings have been corrected since last week’s article.)
1st) Chevrolet, Ford (6)
3rd) Toyota (4)
2021 LASTCAR ARCA MENARDS SERIES OWNERS CHAMPIONSHIP
1st) Fast Track Racing (8)
2nd) Young’s Motorsports (2)
3rd) Bull Racing, Greg Van Alst Motorsports, Kimmel Racing, Rette Jones Racing, Smith Brothers Racing, Wayne Peterson Racing (1)
2021 LASTCAR ARCA MENARDS SERIES DRIVERS CHAMPIONSHIP 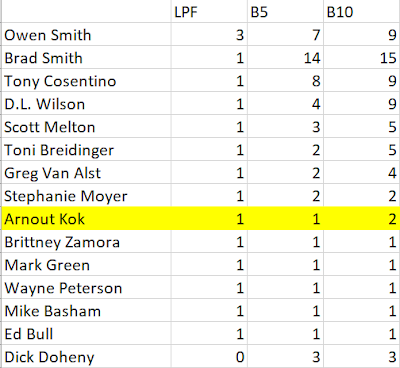