Dr. Ed Bull finished last for the first time in his ARCA Menards Series career in Friday’s Clean Harbors 100 at Watkins Glen International when his #77 Bayside Chiropractic Ford did not start the race.

Dr. William Edward Bull III, DC is a chiropractor and neuropathy researcher based out of Cape Charles, Virginia, which is located in the far eastern portion of the state. He made his ARCA debut in 2008 with his own team and ran at least one road course race each year in the series until 2013. He was initially slated to race with Hixson Motorsports at New Jersey Motorsports Park in 2016, but that entry never made it to the track. ARCA eventually phased out road courses by 2018, and it looked like Bull’s involvement in the series was over, especially after steel-bodied cars were outlawed. However, with little fanfare, Bull showed up on the preliminary entry list for Watkins Glen, one of the many stories that contributed to the weekend.

A robust thirty cars populated the initial entry list - one whittled down to twenty-nine when Chase Purdy unfortunately tested positive for COVID-19, forcing his Dave Mader III-prepped entry to withdraw. Several NASCAR national series drivers entered the race, including Tyler Ankrum, Sam Mayer, Kris Wright, Riley Herbst, Brandon Jones and Carson Hocevar. Chase Briscoe ran in a Chad Bryant-owned entry, making it the first time Bryant was the listed owner of an ARCA car since the 2020 finale. Austin Wayne Self also ran with AM Racing, which absorbed longtime ARCA competitor and owner Kevin Cywinski’s Win-Tron Racing over the offseason. Another entry affiliated with NASCAR national series was the return of Josh Williams Motorsports to the ARCA Menards Series, back for the first time since 2017. The driver was longtime Spec Miata competitor and current Martins Motorsports and Rackley-W.A.R. crew member Brad Perez, who secured funding from Rackley Roofing and a number of smaller backers to make the jump to ARCA. ARCA road ringers Dale Quarterley and Russ Lane also returned, plus independent part-timers Kyle Sieg and Andy Jankowiak. Fast Track Racing brought on longtime team driver Ed Pompa, South African Arnout Kok, Tony Cosentino and D.L. Wilson to drive its four cars. Visconti Motorsports also returned and fielded an entry for local anesthesiologist Chris Werth, who made his series debut in the race.

There was one practice/qualifying combination session on Friday afternoon before the race. Only 26 cars turned a full-speed lap as Jankowiak, Cosentino and Bull did not complete fast laps. Of those who did complete a lap, Brad Smith and D.L. Wilson both landed in the 1:42 bracket, almost a half-minute off leader Ty Gibbs’ time.

Jankowiak was listed last on the starting grid - his team wound up swapping a driveshaft in between practice and the race. Timing and scoring never picked up Bull’s entry, and Catchfence’s Chris Knight later reported that Bull’s car did not start the race. Thus ended Bull’s first attempt under the ARCA Menards Series banner, one that unfortunately never reached the starting line.

Brad Smith was the first of the running entrants to drop out in a planned start-and-park effort. Smith was followed to the garage by Wilson and Cosentino. The Bottom Five was rounded out by Quarterley, whose Mullins Racing entry was bounced into the wall by Drew Dollar in the final turn of Lap 16. 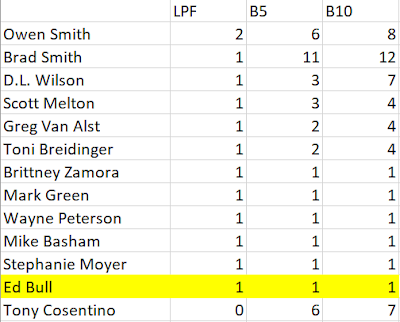