Mason Massey picked up the 1st last-place finish of his NASCAR XFINITY Series career in Saturday’s Ambetter Get Vaccinated 200 at the New Hampshire Motor Speedway when his #99 Brunt Workwear Chevrolet fell out with crash damage after 26 of 200 laps.
The finish came in Massey’s 15th series start. In the XFINITY Series’ last-place rankings, it was the 15th for the #99, the 353rd from a crash, and the 574th for Chevrolet. Across NASCAR’s top three series, it was the 36th for the #99, the 1,263rd from a crash, and the 1,796th for Chevrolet.
Last summer at Bristol, Massey was set to make his fourth series start with the same #99 team fielded by B.J. McLeod Motorsports. But at the command, his car wouldn’t fire, and a push from a truck couldn’t get his car started. He ended up missing the green flag and spent the first 184 laps in the garage area. Only then did the car finally start, and he climbed from 37th to 30th at the checkered flag (LINK). By season’s end, Massey had ten career XFINITY starts and had not failed to finish any of them. He even matched his season-best 21st at Charlotte in the second race of the double-header in Richmond.
Massey continued this streak without a DNF into Saturday’s race in Loudon, which would be his fifth start of 2021. Two of those starts had already been lead-lap finishes – a 27th at Talladega, and a 29th just last week in Atlanta. This attracted the attention of Brunt Workwear, a brand that debuted just ten months ago, which joined Massey as sponsor on Thursday. “Mason brings a tough-as-nails, underdog approach to the track that mirrors the values we hold here at BRUNT,” the company tweeted. “We’re super excited to have had the opportunity to partner, and cannot wait until race-day!” The McLeod team also produced hero cards of Massey’s car on a Toyota Supra, though he would run a Chevrolet Camaro in the race. Massey would roll off 29th.
Drawing the 40th and final starting spot was Spencer Boyd, who was making his first XFINITY start since 2018. This time, his ride was Jimmy Means Racing’s #52 Chevrolet, which carried new sponsorship from Freedom Warranty. While Tommy Joe Martins’ #44 AAN Adjusters Chevrolet twice failed pre-race inspection, he did not incur a tail-end penalty, and would retain his 17th-place starting spot. Boyd retained the last spot at the start, and was 24.472 seconds back of the lead after 12 laps. On Lap 20, just moments before the competition caution, Boyd was within sight of 39th-place C.J. McLaughlin in the #61 Sci Aps Toyota. But by then, both had been lapped going into Turn 3, and McLaughlin edged Boyd for the Lucky Dog on the ensuing caution.
On the restart, trouble broke out near the front of the inside lane. When the leaders rolled slowly to the starting line, 15th-place Sam Mayer’s #8 JR Motorsports Chevrolet rear-ended Brandon Jones’ #19 Menards / Jeld-Wen Toyota, which shunted Riley Herbst’s #98 Monster Energy Ford. Herbst cut left to avoid rear-ending Brett Moffitt’s #02 Robert B. Our Co. Chevrolet, only for Herbst to be spun by Jones into the inside wall. Further back, Mason Massey was running in the outside lane with the unsponsored black #78 Toyota of Jesse Little in front of him. When Little slowed, Massey got in the back of him, damaging the nose of his own car.
Massey joined Mayer, Jones, and Herbst on pit road as Spencer Boyd earned the Lucky Dog. Massey was the first to take last from Boyd on Lap 28, and Mayer fell to 39th as both Herbst and Jones got back to the track first. On Lap 31, Mayer pulled his car behind the wall, knocking him out of the race under the Damaged Vehicle Policy. Three laps later, Massey’s car was in the garage, where the crew said the upper portion of the radiator was damaged. While Massey was just two laps back of Mayer, he too was done for the day. Jones pulled behind the wall after completing 63 laps to take 38th while Herbst recovered nicely to finish 10th.
Finishing 37th was C.J. McLaughlin, who reported sparks inside his car when he dropped out in the final laps. Alex Labbe made at least three trips to the garage area, and had just returned to the track after McLaughlin’s exit to close his two-lap deficit to the #61. Labbe’s #36 Prolon / Rousseau / Silver Wax Chevrolet finished 36th, 26 laps down.
Brandon Gdovic reunited with Sam Hunt Racing on Saturday and in the #26 SnapMobile.shop Toyota finished on the lead lap in 16th, his best run since his career-best 8th in this year’s Daytona opener.
Kyle Weatherman slid into Tommy Joe Martins in the early laps, putting both drivers into the outside wall, but Weatherman recovered to finish 19th – his best run since he took 16th on the Daytona Road Course. Weatherman did so in the same car that locked into gear in last week’s Atlanta race, after which he and the team had to rebuild the damaged right-rear corner on his #47 Axe Crossbows Chevrolet. Martins also recovered nicely, taking 21st.
David Starr welcomed new sponsorship from Vodkyte on his #66 Toyota and finished 20th, his best run since he also finished 20th in Texas, four races ago.
LASTCAR STATISTICS
*This marked the first last-place finish for the #99 in a XFINITY Series race at Loudon.
THE BOTTOM FIVE
40) #99-Mason Massey / 26 laps / crash
39) #8-Sam Mayer / 28 laps / crash
38) #19-Brandon Jones / 64 laps / radiator
37) #61-C.J. McLaughlin / 164 laps / electrical
36) #36-Alex Labbe / 174 laps / running
2021 LASTCAR XFINITY SERIES OWNER'S CHAMPIONSHIP
1st) B.J. McLeod Motorsports (4)
2nd) DGM Racing, JD Motorsports, JR Motorsports, Mike Harmon Racing, Motorsports Business Management, RSS Racing / Reaume Brothers Racing (2)
3rd) Our Motorsports, Sam Hunt Racing, Stewart-Haas Racing (1)
2021 LASTCAR XFINITY SERIES MANUFACTURER'S CHAMPIONSHIP
1st) Chevrolet (13)
2nd) Toyota (5)
3rd) Ford (1)
2021 LASTCAR XFINITY SERIES DRIVER'S CHAMPIONSHIP 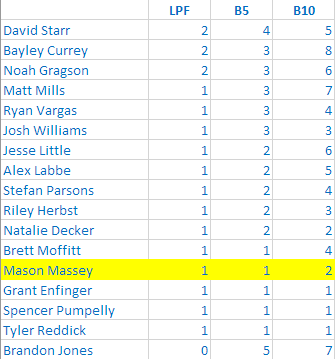