SRX: Willy T. Ribbs the only DNF of Nashville finale

Willy T. Ribbs finished last for the first time in his Superstar Racing Experience career in Saturday’s event at Fairgrounds Speedway Nashville when his #17 Fram Filters machine was involved in a single-car accident after 57 of the race’s 77 laps.

The finish came in Ribbs’ sixth career start. Across series history, it was the first for car number 17 and the second for crew chief Todd Parrott.

On paper, the 2021 Superstar Racing Experience season has not been kind to Willy T. Ribbs. Racing on short ovals that the 66-year-old career road racer had little to no experience on, Ribbs has struggled to find good finishes, with a best effort of seventh at Slinger after avoiding a lot of carnage. However, the paper doesn’t tell the story. Whether seen on the broadcast or on social media, Ribbs often has a wide smile on his face, clearly enjoying his time mixing it up with other stars from his generation and stars that are young enough to be his children.

Nashville was perhaps the highest-profile race for the series so far due to its field of drivers. The series quietly brushed aside the fact that there was no “local hero” in light of the two ringer drivers enlisted for Nashville. The two ringer drivers were only two of the most recognizable names in American motorsport: Elliott and Deegan. Hailie Deegan returned as a proper ringer for the season finale after being a super-sub for Tony Kanaan in two earlier events, and Chase Elliott joined the series for a rare opportunity to race against his father, Bill. With no practice or qualifying before his NASCAR Cup Series race, Chase was able to make a Saturday night race in Nashville work, and it was an extremely fun dynamic going in to the event. There was no shortage of fireworks on the crew chief side of things, either. Tony Eury Jr. completed his half-season as a replacement for Mike Beam, and veteran late model crew chief Ricky Taylor joined the series as the ringer crew chief. Taylor is perhaps best-known for guiding Chase Elliott to Snowball Derby wins in 2011 and 2015, but has plenty of repute inside the short track community for myriad achievements.
Last week’s last-place finisher Michael Waltrip received no reprieve from the random draw, as he started in 12th. However, he passed 11th-place starter Ribbs in the first set of turns and set sail, as the 17 car was 11 seconds behind the leader and 5.5 seconds behind 11th at the halfway mark of Heat 1. Even with a caution for a commercial break, Ribbs could not make a pass on anybody and finished out the first heat in last.

LASTCAR SRX Drivers Champion Bill Elliott won the first heat after starting from the front row and therefore inherited the last starting position for the second heat. He dropped his son, the 11th-place starter, to last at the end of the first lap and cleared the #94 heading into Turn 1 on the second lap. Ribbs, meanwhile, had drifted back to ninth, and found himself the odd man out when Bill Elliott and Marco Andretti made it three-wide around the one minute mark for ninth. Ribbs checked-up as he was all the way by the wall in the turn and Chase Elliott also passed him, relegating Willy T. to the caboose position again, where he would finish Heat 2.

With last-place finishes in both heats, Ribbs started last in the feature event. He was cleared by 11th-place running Hailie Deegan by turn one of the opening lap and slowly faded away from the field, falling six seconds back by lap seven. On the first restart, Michael Waltrip cleared Ribbs by the start/finish line, again quelling hopes of an immediate overtake. He ran last again until the next caution, with a restart on Lap 55. A jumble of cars fighting for real estate in turn two the following circuit led to Ernie Francis Jr. making contact with the wall on the backstretch. Ribbs, trailing the group, hit the binders hard and spun the car around by himself, nosing it into the inside wall and dislodging the front bumper a bit.

Due to the damage, Ribbs went behind the wall during the ensuing caution, and while crew chief Todd Parrott’s crew attempted to Sawzall the front bumper off, Ribbs instead climbed from his car, ending his race. While the crash occurred with 21 laps to go, Ribbs was listed as “out” with 14 to go with a grey color on the scoreboard. During his exit interview with Matt Yocum, Ribbs spoke highly of the series.

“It was an awesome experience,” he said. “It was either run in to the back of them or spin out, and I wasn’t going to take them out of the race.” 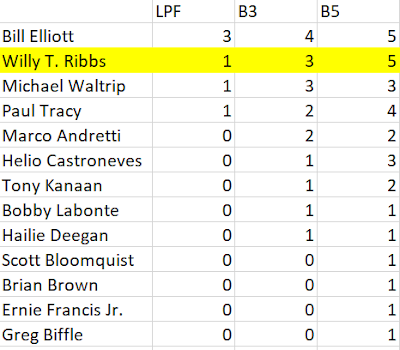