Ricky Stenhouse, Jr. picked up the 11th last-place finish of his NASCAR Cup Series career in Sunday’s Quaker State 400 presented by Walmart at the Atlanta Motor Speedway when his #47 NOS Energy Drink Chevrolet fell out with suspension issues after 178 of 260 laps.
The finish, which came in Stenhouse’s 313th series start, was his third of the year and first since Pocono, two races ago. In the Cup Series’ last-place rankings, it was the 11th from suspension problems, the 36th for the #47, and the 811th for Chevrolet. Across NASCAR’s top three series, it was the 46th for suspension issues, the 54th for the #47, and the 1,795th for Chevrolet.
Exactly one year ago this month, Stenhouse and his JTG-Daugherty Racing teammate Ryan Preece combined to score four consecutive Cup Series last-place finishes, tying a record set by PRISM Motorsports’ drivers Dave Blaney and Michael McDowell in April 2010. This year, following Stenhouse’s most recent last-place finish in the second round of the Pocono double-header, Preece lost an engine in the early laps at Road America while Stenhouse managed a solid 12th.
Heading into Atlanta, where Stenhouse carried sponsorship from NOS Energy Drink for the first time since Talladega, the #47 was set to roll off 16th with Preece in 34th.
Following the withdrawal of Timmy Hill’s #66 Toyota for Motorsports Business Management, the 37th and final starting spot fell to Garrett Smithley in Rick Ware Racing’s #53 Seed Token Chevrolet. Martin Truex, Jr. had been slated to start 5th in the #19 Auto-Owners Insurance Toyota before his car twice failed inspection, dropping him to the rear of the field. When the green flag dropped, Truex was ahead of Smithley, who ran by himself in the 37th spot. After three laps, Truex had already climbed to 30th.
On Lap 12, Smithley was fighting a tight condition as his car hit the splitter, but still managed to catch and pass the #00 8 Ball Chocolate Whiskey Chevrolet of Quin Houff. Two laps later, Houff caught Smithley’s teammate Josh Bilicki in the #52 Junction Fuels Ford, whose spotter was already watching for the leaders to catch him. Bilicki became the first driver lapped on the 19th circuit, and under the competition caution on Lap 25 called for more rear stability as he was “plowing tight.” The #52 crew would ultimately bring him in for four tires, fuel, and three rounds out of the track bar. Bilicki and Smithley traded the spot under yellow before Bilicki took it on the Lap 30 restart.
On Lap 32, Bilicki was still running in last when the spotter warned “trying to wreck in front of you – wrecking, wrecking---” At that moment, Cody Ware in still another RWR entry was attempting a pass to the inside in his #51 Nurtec ODT Chevrolet. This put Ware on the bottom of a four-wide formation below Anthony Alfredo in the #38 Georgia Peanuts Ford, Stenhouse, and the #99 Good Sam – Autism Awareness Chevrolet. Ware skated sideways into Alfredo, who clipped the left-rear corner of Stenhouse’s car as Suarez passed to Stenhouse’s outside. Stenhouse and Suarez then spun into the inside wall, and Alfredo successfully weaved his way past them both.
While Ware stayed out of the wall and continued on, both Suarez and Stenhouse nosed into the inside wall with Suarez slapping the fence with the driver’s side. Both made it to pit road, where Stenhouse took last from Bilicki on Lap 32. After shutting down and re-firing the engine at least two times, Stenhouse returned to the track with three minutes left on the “Crash Clock.” Suarez returned with 45 seconds remaining on his, but managed to remain ahead of Stenhouse. On Lap 36, Suarez cleared the Clock, followed by Stenhouse soon after. Suarez remained on the track while Stenhouse was now clear to go to the garage for repairs around Lap 41.
There was little radio traffic on Stenhouse’s channel until Lap 86, when the crew relayed that they “fixed the toe,” and that the left-front splitter had been removed. The car re-fired on Lap 100 and returned to action a full 65 laps down, 54 laps behind the damaged Suarez. The repaired car was first seen on the NBCSN broadcast on Lap 108. The team advised their driver that they would tell him if he was within a half-second of minimum speed. “It doesn’t turn, obviously,” said Stenhouse on Lap 161. Stenhouse’s car also happened to be sitting directly behind the pace car when the red flag came out for track repairs entering the quad-oval.
When the race restarted on Lap 171, Stenhouse was 73 laps down, and on the verge of locking-up last place before the race ended. By Lap 204, he was 60 laps behind a still 36th-place Suarez with just 57 laps to go. Stenhouse appeared headed to complete the full distance, but entering Turn 3 coming to two laps to go, he dropped to the apron and pulled out of the race. Suspension issues were the listed cause. He dropped out 79 laps down, and was credited 82 laps down in the final results.
Suarez, too, climbed no higher than 36th after the crash, though he remained within 17 laps of the leader. Houff and Bilicki were five laps ahead of Suarez with Ware rounding out the Bottom Five. Ware was five laps ahead of Bilicki and on the same lap as both Smithley and the fourth RWR entry of Bayley Currey in the #15 Fort Worth Screen Printing Chevrolet.
LASTCAR STATISTICS
*This marked the first last-place finish for the #47 in a Cup race at Atlanta.
THE BOTTOM FIVE
37) #47-Ricky Stenhouse, Jr. / 178 laps / suspension
36) #99-Daniel Suarez / 243 laps / running
35) #00-Quin Houff / 248 laps / running
34) #52-Josh Bilicki / 248 laps / running
33) #51-Cody Ware / 253 laps / running
2021 LASTCAR CUP SERIES OWNER'S CHAMPIONSHIP
1st) JTG-Daugherty Racing, Stewart-Haas Racing (4)
2nd) Spire Motorsports (3)
3rd) Chip Ganassi Racing, Motorsports Business Management, Rick Ware Racing (2)
4th) Front Row Motorsports, Hendrick Motorsports, StarCom Racing (1)
2021 LASTCAR CUP SERIES MANUFACTURER'S CHAMPIONSHIP
1st) Chevrolet (13)
2nd) Ford (6)
3rd) Toyota (2)
2021 LASTCAR CUP SERIES DRIVER'S CHAMPIONSHIP 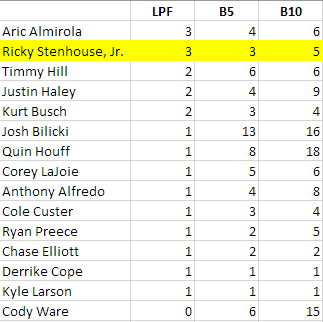