Wayne Peterson finished last for the 48th time in his ARCA Menards Series career in Saturday’s Menards 250 at Elko Speedway when his #06 GreatRailing.com Ford finished early with brake problems after completing 1 of the race’s 250 laps.

The finish came in Peterson’s 117th career series start and was his first since Springfield in 2020, 10 races ago.

Since the end of the 2020 season, Wayne Peterson and his team have scaled down their operation following the departure of Tim Richmond to Richmond-Clubb Motorsports. Longtime driver Con Nicolopoulos took driving duties at the superspeedways, and Don Thompson took over the reins at Pocono. The team ran a full-race effort for A.J. Moyer at Toledo and grabbed a top-ten finish before late withdrawals at Charlotte and Mid-Ohio. Elko marked Peterson’s first time taking the wheel of his team’s car, extending his long career to the age of 83.

After the withdrawal of Eric Caudell, sixteen other cars joined Peterson on the entry list. Of note, Daniel Dye showed up in the first race of his new agreement with GMS Racing, and Alex Clubb took over the wheel of the Richmond-Clubb Motorsports car. Taylor Gray returned to racing for the first time since a passenger car accident earlier in the spring, and Adam Lemke made a rescheduled series debut with Rette Jones Racing after not making it to the Toledo race. Fast Track Racing filled its entries with North Dakota hot shoe Bryce Haugeberg, back for the first time since Phoenix, Owen Smith, and Dick Doheny. The fourth Fast Track entry was a Fast Track entry on paper, but in reality it was a Mullins Racing entry, as Willie Mullins prepped and drove the car but Fast Track hauled the car to the track and serviced the car during the race. One driver made his series debut. Ron Vandermeir Jr. of Sheridan, Illinois brought his own #66 car to the track for his first ARCA race. Vandermeir is a veteran of the Mid-American Stock Car Series and has won three championships in the regional tour.

In the series practice session, Ty Gibbs led the field with a lap of just over 14.5 seconds. Brad Smith was slowest of the drivers to get a full-speed lap it, clocking in at 16.5 seconds, but Peterson did take one lap of his own, coming across the line in just over 23 seconds. Qualifying was much of the same story with Gibbs at the front and Smith the slowest car to take a lap. Peterson did not take a lap but still made the field as there were not enough entries to send anybody home.

At the start of the race, Peterson took the green flag with the field, as there were no tail-end penalties. However, when the leaders came around for Lap 3, Peterson slowed to a crawl in Turns 1 and 2 and was extremely close to the groove at the exit of the second corner, almost getting brushed by Ty Gibbs as the leader roared by to the outside. The NBC cameras panned to Peterson for a few moments as he pulled in to the track’s unique backstretch pit road entrance, done for the night. Owen Smith and Doheny also retired within the first ten laps, and Brad Smith completed just over 50 laps before his race ended. Haugeberg rounded out the Bottom Five, the victim of a transmission issue with just a few laps left in the race. 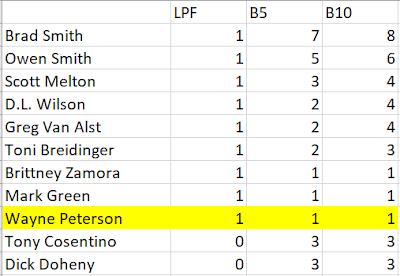