Mike Basham finished last for the fourth time in his ARCA Menards Series career in Saturday’s Zinsser SmartCoat 200 at Berlin Raceway when his #11 PedalinPup.com Ford retired with handling issues after completing 11 of the race’s 200 laps.

The finish came in Basham’s 85th series start, and was his first since the Michigan International Speedway race in 2020, nineteen races ago.

Since he was last featured here, Basham ran the entirety of the back half of the 2020 ARCA season for Fast Track Racing. It was a revelation of sorts for the Clarksville, Indiana driver, scoring three top-ten finishes and failing to finish only two races after his last-place outing at Michigan. Included in the late-season tear was a then-career-best seventh at Winchester Speedway in September and then another career-best, this time a sixth-place finish at the Springfield dirt mile in October. However, with multiple drivers such as D.L. Wilson and Tony Cosentino either entering the Fast Track fold or increasing their schedules, Basham’s name was not called upon until Saturday at Berlin, the midway point of the season.

The entry list totaled sixteen cars, and like its other Upper Midwest races, Madison and Elko, few surprise entrants showed up. Jesse Love and Gracie Trotter continued their partial seasons in Venturini Motorsports entries, and Daniel Dye took the wheel for his second race of the GMS Racing #21 machine, which he will run full-time for the rest of the year. Alex Clubb ran again for his co-owned team, and Fast Track Racing filled out their four cars with Tony Cosentino, Owen Smith, Mike Basham and Mason Mingus, who made a return to the team after his spectacular run at Nashville, where he captured the pole in the ARCA East.
There were also two series debuts in the field. Morgan Alexander, a former dirt late model driver from Georgia, made his first national start after making his ARCA East debut earlier this season. At Berlin, he ran with Hype Motorsports, a team affiliated with NASCAR Truck Series outfit Niece Motorsports. He drove an old Mason Mitchell Motorsports car that the team’s namesake took to victory lane at Berlin in 2014. The other debut was Zachary Tinkle, a CRA super late model driver from Speedway, Indiana. Tinkle’s father tragically passed away earlier this year, and he has kept pushing on with his career, making the jump up to full-bodied stock cars after he met team owner Wayne Peterson at Charlotte. Adam Lemke was also originally scheduled to make another start for Rette Jones Racing, but the entry did not make it to the track.

Practice was a fairly uniform event for the field, with five cars in the 16-second bracket, six cars in the 17-second range, and five in the 18-second region. Brad Smith at an 18.8 was the slowest car on the track, clocking in just about two tenths of a second behind Cosentino. Qualifying was a different story as the majority of the field made their way under 17 seconds. Dye was the only driver to qualify under 16.5 seconds, and Brad Smith was just over 2 seconds behind the 21 car, clocking a lap of 18.6 seconds.

There were no tail-end penalties, and it was a very uniform 16-car grid from the front to the back at the start finish line. By turn three of the opening lap, however, Cosentino had cleared Smith for last. The 48 held the position until the leaders came around, lapping the 48 machine around Lap 8. Basham only entered the last-place picture on Lap 13, when he was shown going very slow on the apron in Turn 1, perhaps in preparation to go to pit road. He took last from Smith the following lap, and was listed as out on Lap 16, sealing the last-place fate.

Cosentino followed his Fast Track teammate to the garage a mere three laps later, also citing handling problems. Brad Smith retired after 25 laps, and despite hinting on social media that handling was also his demise, the official listed reason was brake problems. After a stint in the garage or two during the race, Zachary Tinkle finished thirteenth, 60 laps down under power. Thad Moffitt rounded out the Bottom Five, victim of a power steering issue that resulted from contact with Gracie Trotter. 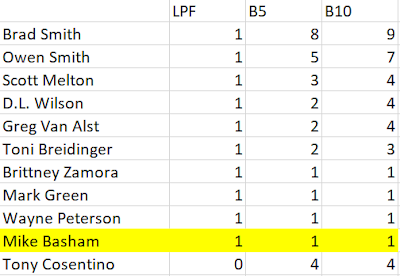