Stephanie Moyer picked up the first last-place finish of her ARCA Menards Series career in Saturday’s Shore Lunch 150 at Iowa Speedway when her #01 EvergreenRacewayPark.com / Council Cup Campground Toyota retired with brake failure after completing 14 of the race’s 150 laps.

Stephanie Moyer is no stranger to the racing world. The Sheppton, Pennsylvania driver began her career in go-kart racing and then moved to the factory stock division at Evergreen Raceway Park, a paved short track in Hazelton, Pennsylvania. She then attended the University of Northwestern Ohio in the automotive technology program, graduating in 2019. She gained valuable experience while there, landing as a member of the Mason Mitchell Motorsports team before its closure. Returning to Evergreen in a full-time capacity in 2020, Moyer won the track championship in the factory stock division and promptly set her sights on the bigger and faster series, namely the ARCA series where she had already turned wrenches. She tested with Fast Track Racing at Daytona in the beginning of the year and was approved to drive by the series. After a debut in the East Series at Five Flags, Moyer made her first national ARCA start at Pocono in June, staying out of trouble and finishing 16th in a 25-car field. Her effort for Iowa included backing from Evergreen Raceway Park and Council Cup Campground, a campground in eastern Pennsylvania.

As it was a combination race with the ARCA Menards Series East, a rather large field of 23 cars was entered for the race at Iowa. The East contingent included Rajah Caruth of Rev Racing, Sammy Smith of Joe Gibbs Racing, Mason Diaz of Visconti Motorsports, Joey Iest of David Gilliland Racing, and Max Gutierrez of Rette Jones Racing. ARCA West standout Jesse Love rejoined Venturini Motorsports for his limited schedule, and Morgan Alexander returned for his second consecutive race. Tim Richmond and Eric Caudell returned for their own teams, and despite some hesitance after a crash at Pocono, Bret Holmes Racing returned with the eponymous team owner behind the wheel. Fast Track filled out their cars with D.L. Wilson, back for the first time since Charlotte, Owen Smith, and Bryce Haugeberg, the hot shoe from North Dakota. The one series debut in the field was Conner Jones, a JR Motorsports late model driver that teamed up with Bruce Cook Racing for the Iowa event. A second Cook entry withdrew, and entries from both Wayne Peterson Racing and RSS Racing never found their way to the entry list.

Now the marquee event of the year at Iowa Speedway, the ARCA cars took their time with a full practice session in addition to qualifying. In practice, Wilson and Haugeberg were 23rd and 22nd, respectively, just under two-tenths apart in the mid-27 second range. Both drivers knocked their times down to the low-27s in qualifying, and thus leapfrogged Brad Smith, who, with a working crew of just one other person at the track, put down a lap of 27.39 seconds in qualifying.

With no tail-end penalties, the 48 machine took the green shotgun on the field. He retained the 23rd position for the first one-and-a-half laps, when Mason Diaz got loose under Conner Jones and spun in turn three, not hitting the wall or any other driver. In turn, he handed last-place over to Daniel Dye, whose GMS Racing crew thought that the car was a little sluggish at the start of the race and took the opportunity of an early caution to pop the hood and check for engine problems, of which they found none.

On the restart, both ascended rapidly through the back half of the field, quickly putting Smith in last place for a second time in the race. Despite being 14 seconds back on lap ten, Smith kept Haugeberg in close proximity the whole time, trailing the 11 car by less than a second. Both cars were lapped for the first time on the 13th circuit.

Meanwhile, Moyer was running 21st, a fair distance ahead of the last two cars. She did not enter the last-place battle until she exited the racetrack on Lap 15, having stayed on the lead lap for the duration of her run. The TrackPass leaderboard dropped her to last on the 16th go-round, listed her as “off” on Lap 19, and declared her “out” on the following time by. Reports from the track Saturday afternoon indicated that the 01 was a planned start-and-park effort, and the driver’s only comment on her race across all social media channels was one word: “Welp,” posted to her Twitter account, @Steph_Moyer.

Fast Track teammate Cosentino was the next car to retire, his race done after 18 laps. Jones and Iest fell out in a two-car incident on lap 27, and Brad Smith rounded out the Bottom Five when clutch issues sidelined him at the one-third mark of the race. 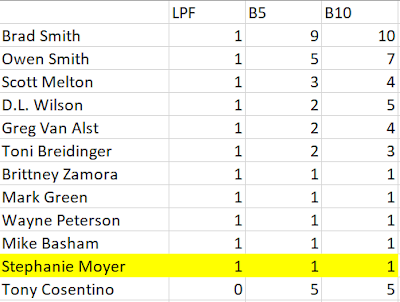