Noah Gragson picked up the 3rd last-place finish of his NASCAR XFINITY Series career in Saturday’s B&L Transport 170 at the Mid-Ohio Sports Car Course when his #9 Bass Pro Shops / Black Rifle Coffee Chevrolet fell out in a crash without completing any of the race’s 78 laps.
The finish, which came in Gragson’s 82nd series start, was his second of the season and first since COTA, two races ago, giving him the lead in the 2021 LASTCAR XFINITY Series standings. In the XFINITY Series rankings, it was the 13th for the #9, the 348th from a crash, and the 570th for Chevrolet. Across NASCAR’s top three series, it was the 55th for the #9, the 1,255th from a crash, and the 1,783rd for Chevrolet.
Coming into Mid-Ohio, Gragson had endured another frustrating afternoon in Charlotte. Running around the 7th spot with 13 laps to go, Gragson was looking to make a move to the outside when contact between Joe Gibbs Racing teammates Brandon Jones and Daniel Hemric sent both cars spinning into his path. The resulting pileup left Gragson 27th. Still, metric qualifying for Mid-Ohio ranked him a solid 13th on the grid for Saturday’s stand-alone event.
Rolling off 40th and last was Gray Gaulding in the #52 SBS Vision Chevrolet. Two drivers joined him at the rear for unapproved adjustments – 33rd-place Kris Wright in the #26 America’s Auto Auction Toyota and 28th-place Ryan Ellis in the #99 Good Sam / CorvetteParts.net Toyota. Coming to the stripe, one car was trailing the field by open track, though it was unclear whether it was one of the penalized drivers.
The last-place battle would then be settled at record pace. Coming off Turn 1, 4th-place starter Jeb Burton put two wheels off course in his #10 Rocky Boots Chevrolet. By the time he returned to the track, a huge cloud of dirt was in his wake, followed by a chunk of someone’s splitter sailing through the air. The splitter was Gragson’s, whose #9 was seen limping into the Keyhole with the nose of his car destroyed. Leaking fluid as he slowed to a stop, Cody Ware spun in his oil. Ware would ultimately recover nicely, taking 15th in his #17 Nurtec ODT Ford. But for Gragson, his day was done.
Tommy Joe Martins took 39th after the engine let go on hi #44 Gilreath Farms Red Angus Chevrolet. Harrison Burton ended up 38th with crash damage to his #20 Dex Imaging Toyota. Bayley Currey had an electrical issue after 30 laps, taking 37th behind a returning David Starr. Starr finished 12 laps down in the #61 Rad Air Complete Car Care Toyota after his shifter was stuck in gear.
After a challenging start to the season, Josh Williams finally secured his first top-ten finish of the season, taking 10th in the #92 Alloy Employer Services Chevrolet. Jade Buford took 13th in the #48 Big Machine Spiked Coolers Chevrolet, which is now the best finish of the season for the new Scott Borchetta-owned effort. Gray Gaulding, the last-place starter, came home in 17th, just ahead of Ryan Vargas (#4 Celebrating Makenna Karmie Chevrolet), Matt Jaskol (#66 Auto Parts 4 Less Toyota), and Landon Cassill (#6 Jarett Logistics Chevrolet), who all finished on the lead lap.
LASTCAR STATISTICS
*This marked the first last-place finish for both the #9 and JR Motorsports at Mid-Ohio.
*Gragson is the first driver to fail to complete a lap of an XFINITY Series race since August 8, 2020, when Bayley Currey lost an engine on the opening lap of the Henry 180 at Road America.
THE BOTTOM FIVE
40) #9-Noah Gragson / 0 laps / crash
39) #44-Tommy Joe Martins / 7 laps / engine
38) #20-Harrison Burton / 19 laps / crash
37) #74-Bayley Currey / 30 laps / electrical
36) #61-David Starr / 66 laps / running
2021 LASTCAR XFINITY SERIES OWNER'S CHAMPIONSHIP
1st) B.J. McLeod Motorsports, JR Motorsports, RSS Racing / Reaume Brothers Racing (2)
2nd) DGM Racing, JD Motorsports, Mike Harmon Racing, Motorsports Business Management, Our Motorsports, Sam Hunt Racing, Stewart-Haas Racing (1)
2021 LASTCAR XFINITY SERIES MANUFACTURER'S CHAMPIONSHIP
1st) Chevrolet (9)
2nd) Toyota (3)
3rd) Ford (1)
2021 LASTCAR XFINITY SERIES DRIVER'S CHAMPIONSHIP 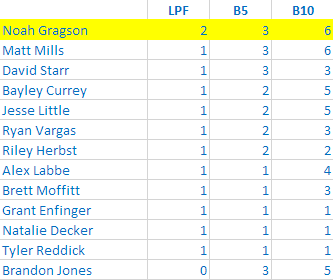