Bill Elliott finished last for the second time in his Superstar Racing Experience career in Saturday’s event at Eldora Speedway when his #9 machine crashed out after completing 45 of the race’s 50 green-flag laps.

The finish was his first since Stafford, two weeks ago. Across series history, it was the second for car number 9 and the first for crew chief Keith Kunz.

Since his last-place finish to kick off the season at Stafford, Elliott has continued to soldier on through the Superstar Racing Experience season. Mechanical gremlins again caught him at Knoxville, dropping him to 11th. Series director Ray Evernham actually noted the chassis Elliott was driving as one of the series’ biggest issues following the Knoxville race, and gave Elliott a new chassis to race for the rest of the season while the series tried to permanently remedy the issues on the old car.

As luck would have it, Speed drew the 12th and final starting position for Heat 1. He did not stay there for long, as last week’s last-place finisher Paul Tracy doored Willy T. Ribbs in turn three of the opening lap, dropping the driver of the 17 to last. Ribbs, who said in an interview after the feature that a lack of rear grip hampered him during the heats, was unable to make any passes for the duration of the heat and finished last.

With the full invert from Heat 1 to Heat 2, Tony Stewart took over last at the beginning of Heat 2, although he handed the position to Helio Castroneves a little ways into the heat. Barely a minute in, however, Ernie Francis, Jr. spun Tony Kanaan at the end of the frontstretch, and Michael Waltrip and Kody Swanson piled in from behind. Francis, Waltrip and Swanson all failed to finish the heat, with Swanson scored in last. He was also the only driver forced to a backup car for the feature, his patriotic paint scheme swapped for a flat blue one. Elliott enjoyed a pair of relatively anonymous performances in the heat races, finishing 8th in the first heat and 7th in the second.

With drivers starting the feature in accordance to their average finish in the heats, Ribbs was slated to start last until Stewart hit the kill switch on his machine during the pace laps, meaning the series’ signature orange car would start the feature from the tail. Smoke made quick work of Ribbs, who remained there for much of the first half of the race before passing both Kanaan and Francis right before the halfway mark. Around that time, Francis punted Kanaan, much to the dismay of the Brazilian.

After a game of bumper cars between Kanaan and Francis during the ensuing caution, Ribbs was somehow shuffled to the end of the lineup, possibly because of a pit stop that the broadcast did not cover. He remained there into the waning stages of the race, as the evolving track continued to challenge the career pavement racer.

Things began getting dicey in the middle half of the field with about ten laps to go, and it came to a head with five to go. Fourth-place runner Paul Tracy divebombed Bobby Labonte into turn one, sending the 18 car into a lazy slide in the middle of the turn. He was tagged first by Marco Andretti and then by Elliott, destroying the front end of the 18 car and substantially damaging the 9 as well. Andretti was running in fifth and Elliott in seventh at the time of the incident.

Labonte dropped the window net and took a ride from a safety van to the infield. Elliott was able to drive his machine to pit road, where he exited the car. Since caution laps do not count in SRX feature events, Elliott was not credited with an extra lap completed and remained below Labonte in the classification, his second last-place finish in the series’ three races. 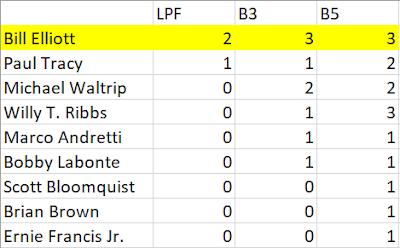