Cole Custer picked up the 1st last-place finish of his NASCAR Cup Series career in Saturday’s Pocono Organics CBD 325 at the Pocono Raceway when his #41 HaasTooling.com Ford was eliminated in an accident after 13 of 130 laps.
The finish came in Custer’s 57th series start. In the Cup Series’ last-place rankings, it was the 41st for the #41, the 615th from a cash, and the 709th for Ford. Across NASCAR’s top three series, it was the 57th for the #41, the 976th for Ford, and the 1,258th from a crash.
While overshadowed by drivers like Chase Briscoe, Christopher Bell, and Tyler Reddick, who have each excelled in their rise through NASCAR’s three national touring series, Cole Custer has been impressive in his own right. In 2014, he finished 12th in his first Truck Series start, won his first pole two starts later, and his first race four starts after that. In the XFINITY Series, he ranked no worse than 5th in points across three full-time seasons, scoring nine wins. And just last year, he took Rookie of the Year after scoring his first Cup win in thrilling fashion in Kentucky.
This year, however, has already proven a struggle. While his Stewart-Haas Racing team remained winless through the year’s first 17 races and teammate Aric Almirola had already scored the most last-place finishes on the year with three, Custer has also languished back in the running order. Only seven times in the first 17 races had he finished inside the Top 20 with a best of 10th at Talladega and Dover. He crashed out early at both Darlington and the Circuit of the Americas, the latter in terrifying fashion after Martin Truex, Jr. rammed his stalled Ford during a downpour. Just last week at Nashville, he ended up 30th, back in the order after a cut tire ripped the brake lines from his Ford.
At Pocono, Custer was set to roll off 26th, but his car twice failed inspection, resulting in a tail-end penalty for the start of the race. He took the spot from Timmy Hill, scheduled to roll off 38th in the #66 M&M Mechanical Toyota. But by the time the green flag dropped, Hill had again dropped behind Custer, and was shown 3.365 seconds back of the lead.
Just like the Truck Series race earlier that day, there was trouble in the middle of the pack just moments after the green flag dropped. Ryan Blaney, who rolled off 27th in the #12 Menards / Richmond Ford, checked-up in front of 29th-place Chase Elliott in the #9 NAPA Auto Parts Chevrolet. Elliott bumped Blaney, and a fast-closing Ryan Preece in 31st had to cut left to avoid ramming Elliott even harder. The gap closed too quickly, and Preece’s #37 Thomas’ / Kroger Chevrolet collided with the left-rear corner of Elliott’s car, causing significant damage to the #9. Somehow, all three kept their cars straight, and it was several laps before the television broadcast made note of the damage.
As Elliott gradually lost ground, Hill began to lose touch with the rest of the pack. From Lap 2 to Lap 3, he fell from 0.249 back of 37th-place Josh Bilicki in the #52 Jacob Companies Ford to 1.079 seconds, and was 3.805 back when debris in Turn 2 brought out the first caution on Lap 10. NASCAR ruled this yellow as the competition caution – already set for Lap 12 – and Elliott was able to pit for significant repairs to his car. Elliott took last from Hill on the 11th circuit, and was 1.149 seconds back of 37th-place Bilicki as the field addressed the starer for the Lap 13 restart.
The next time by, Cole Custer was running around the 17th spot, having stayed out on old tires during the previous caution. For a moment, Custer appeared to be getting back into the outside line, but stopped short. Brad Keselowski, who was running behind Custer in the #2 Freightliner Ford, then made an abrupt move to the left, but in so doing made contact with Custer’s rear bumper. This instantly swerved Custer into the outside wall, then sent him sliding down into the inside barrier just before Turn 1. Custer climbed out, frustrated but uninjured. Custer took last from Elliott on Lap 15.
Taking 37th was Ryan Newman, who spun entering Turn 1 and backed into the outside wall with his #6 Wynham Resorts Ford. Corey LaJoie was running mid-pack when his #7 Nations Guard Chevrolet crossed the nose of Anthony Alfredo’s #38 Death Wish Coffee Ford off Turn 3, resulting in significant passenger-side damage to the #7. LaJoie managed to clear minimum speed to finish five laps down. Timmy Hill had just lost his fourth lap entering Turn 3 for the final time when race leader Kyle Larson blew a left-front tire. Alex Bowman beat both drivers to the finish line. Josh Bilicki rounded out the Bottom Five, two laps ahead of Hill.
Pit strategy in the late stages brought two of Bilicki’s teammates at Rick Ware Racing into the Top 10 inside the final 25 laps with Cody Ware’s #51 Nurtec ODT Chevrolet running as high as 8th and James Davison holding 10th in the #15 Go FMX Chevrolet. A debris caution bunched the field up, dropping Ware to 25th and Davison in 28th with Garrett Smithley in another Ware car – the #53 Rich Mar Florist Chevrolet – taking 29th.
LASTCAR STATISTICS
*This marked the first last-place finish for the #41 in a Cup Series race at Pocono since June 9, 1985 when Ronnie Thomas’ #41 92 WXTU Chevrolet lost an engine after 1 lap of the Van Scoy Diamond Mine 500.
THE BOTTOM FIVE
38) #41-Cole Custer / 13 laps / crash
37) #6-Ryan Newman / 96 laps / crash
36) #7-Corey LaJoie / 125 laps / running
35) #66-Timmy Hill / 126 laps / running
34) #52-Josh Bilicki / 128 laps / running
2021 LASTCAR CUP SERIES OWNER'S CHAMPIONSHIP
1st) Stewart-Haas Racing (4)
2nd) Spire Motorsports (3)
3rd) Chip Ganassi Racing, Motorsports Business Management, Rick Ware Racing (2)
4th) Front Row Motorsports, Hendrick Motorsports, JTG-Daugherty Racing, StarCom Racing (1)
2021 LASTCAR CUP SERIES MANUFACTURER'S CHAMPIONSHIP
1st) Chevrolet (10)
2nd) Ford (6)
3rd) Toyota (2)
2021 LASTCAR CUP SERIES DRIVER'S CHAMPIONSHIP 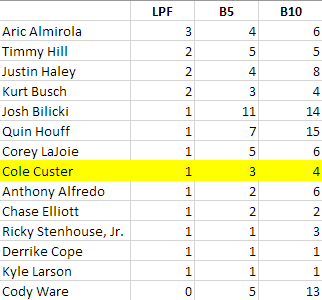