Ricky Stenhouse, Jr. picked up the 10th last-place finish of his NASCAR Cup Series career in Sunday’s Explore The Pocono Mountains 350 at the Pocono Raceway when his #47 Scott Brand Chevrolet lost the engine after 111 of 140 laps.
The finish, which came in Stenhouse’s 311th series start, was his second of the season and first since Sonoma, three races ago. In the Cup Series’ last-place rankings, it was the 35th for the #47, the 705th from engine trouble, and the 809th for Chevrolet. Across NASCAR’s top three series, it was the 53rd for the #47, the 1,104th from engine trouble, and the 1,791st for Chevrolet.
Thanks to his strong 6th-place finish just last week in Nashville, Stenhouse secured 7th on the grid for Saturday’s first round of the Pocono double-header. Overcoming a late-race penalty for laying back too far on a restart, Stenhouse finished 15th that day, which with the inversion secured him 6th on the grid for Sunday. Still sitting 18th in the point standings, 42 markers behind a spot in the Top 16, Stenhouse looked to score his fourth top-15 finish in five races.
Cole Custer, whose crash on Saturday left him in last place, was set to roll off 38th and last. He would incur a redundant tail-end penalty for going to a backup car, joining 37th-place starter Ryan Newman in the #6 Guaranteed Rate Ford, 36th-place Corey LaJoie in the #7 NationsGuard Chevrolet, 33rd-place Ross Chastain in the #42 McDonald’s Chevrolet, 26th-place Anthony Alfredo in the #38 Death Wish Coffee Ford, 23rd-place Ryan Preece in the #37 Thomas’ / Kroger Chevrolet, and 12th-place Kyle Larson in the #5 HendrickCars.com Chevrolet. Also joining the tail-end group was the #77 Diamond Creek Water Chevrolet. Justin Haley was set to start 27th in the car, but handed the wheel to Justin Allgaier after Haley’s hard crash in the day’s XFINITY race.
When the field addressed the starter’s stand, all the backup cars lined up ahead of two other drivers who voluntarily dropped to the rear: 35th-place Timmy Hill in the #66 M&M Mechanical Toyota and 34th-place Josh Bilicki in the #52 Jacob Companies Ford. Coming to the green, Hill was on the inside of Bilicki with Custer and Haley lined up in front of them in Row 18.
On the break, Bilicki got a better pull in the outside lane, putting Hill last across the stripe, 3.807 seconds back of the lead. At the end of Lap 1, Hill was exactly one-tenth of a second back of Bilicki. On Lap 2, Anthony Alfredo’s backup car went straight coming off Turn 2 and hit the wall, then hit the wall again in Turn 3, drawing the caution. Alfredo took last from Hill as he made it to pit road. Alfredo was rolling again on Lap 4, now one lap down, and made a second stop before the Lap 7 restart.
Alfredo left open track in front of him as he took the green, and the leaders soon lapped Bilicki and Hill. On Lap 19, Alfredo reported his car was hitting the splitter hard over the bumps. A tight condition developed by the 28th circuit, forcing extensive adjustments under the Stage 1 caution on Lap 30. The car then picked up a bad vibration that caused the driver’s voice to shake on the radio. By then, he was three laps down, and just trying to reach the finish.
On Lap 61, Timmy Hill was warned by NASCAR to pick up his speed. By then, both he and Bilicki were on the same lap as Alfredo – each of them three circuits behind. Alfredo dropped Hill to last on Lap 64 and on Lap 79 dropped Bilicki back to 36th. When Stage 2 ended on Lap 85, Hill was still in last, five laps down, with all 38 drivers still running. Kyle Busch’s transmission repairs took place under the caution, and Bilicki’s hood was raised during his stop. This dropped Bilicki to last on Lap 89, and was still running there on Lap 91 as Busch caught the tail end of the field coming to green.
Bilicki dropped Hill to last again on Lap 96, and the two traded the spot over the following two circuits. By Lap 111, NASCAR warned Hill to pick up his speed a second time, and this time told him to come in for adjustments. Moments later, Stenhouse entered the last-place picture as he came down pit road reporting a dropped cylinder, smoke coming from his exhaust pipes. The next time by, Hill’s car had stalled after his mandated stop, and his car was being pushed up pit road. The car re-fired and returned to action eight laps down. On Lap 116, NASCAR declared Stenhouse out of the race. Hill made another stop on Lap 118 and was shown nine laps back. “I can’t make minimum,” said Hill as he struggled to get up to speed. On Lap 122, Hill dropped Stenhouse to last place, then pulled into the garage two laps later.
Alfredo and Bilicki climbed to 34th and 35th by the finish, passing Garrett Smithley, who broke a power steering line on his #53 RichMar Florists Chevrolet in the final laps.
Kyle Busch prevailed in the fuel-mileage battle that ended the race, but others behind him also impressed with strong runs. Bubba Wallace took 5th, both the first top-five finish for 23XI Racing and Wallace’s first finish better than 11th all season. Ryan Preece, sent to a backup car after his Saturday collision with Chase Elliott, finished 8th – his third top-ten finish of the year and best finish since he ran 9th on the Daytona Road Course in February.
LASTCAR STATISTICS
*This marked the first last-place finish for the #47 in a Cup race at Pocono.
THE BOTTOM FIVE
38) #47-Ricky Stenhouse, Jr. / 111 laps / engine
37) #66-Timmy Hill / 113 laps / handling
36) #53-Garrett Smithley / 122 laps / engine
35) #52-Josh Bilicki / 132 laps / running
34) #38-Anthony Alfredo / 134 laps / running
2021 LASTCAR CUP SERIES OWNER'S CHAMPIONSHIP
1st) Stewart-Haas Racing (4)
2nd) Spire Motorsports (3)
3rd) Chip Ganassi Racing, JTG-Daugherty Racing, Motorsports Business Management, Rick Ware Racing (2)
4th) Front Row Motorsports, Hendrick Motorsports, StarCom Racing (1)
2021 LASTCAR CUP SERIES MANUFACTURER'S CHAMPIONSHIP
1st) Chevrolet (11)
2nd) Ford (6)
3rd) Toyota (2)
2021 LASTCAR CUP SERIES DRIVER'S CHAMPIONSHIP 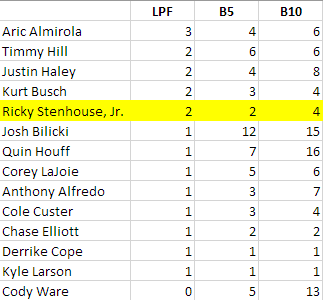 I have been a Stenhouse fan for several years. It seems his new team needs to step up their pit stops. Many times Ricky races hard and always looses positions on pit stops. Also he needs to concentrate on finish's not on racing so hard each lap. Finish's for points is the new Nascar scale for success. Just run all day and finish high and you will be a star in Nascar.