by William Soquet
LASTCAR.info Staff Writer
Mark Green finished last for the 1st time in his ARCA Menards Series career in Friday’s Dawn Ultra 150 at the Mid-Ohio Sports Car Course when his #02 Young’s Motorsports Chevrolet retired with a vibration after completing five of the race’s 42 laps.
The finish came in Green’s second series start.

Many stock car racing fans know of the Green family. Hailing from Owensboro, Kentucky, brothers Jeff, David, and Mark all made an impact in NASCAR as drivers, and each stuck around after leaving the driver’s seat. Mark, after making his final NASCAR-sanctioned attempt in 2012, found his way over to ARCA team Rev Racing, serving as team manager and an occasional test driver. Coincidentally, 2021 saw a second Green brother enter the ARCA arena, as Jeff served as crew chief for RSS Racing’s Kyle Sieg for some of the young driver’s efforts. With Rev set to tackle the full ARCA schedule for the first time in 2021, Mark hopped behind the wheel of the team’s #2 car at the Daytona preseason test, offering nuggets from his over a dozen restrictor plate starts in the Busch Series.
Coming in to the Mid-Ohio race, Green was a late add to the entry list, not for Rev, but for a different team – Young’s Motorsports. The Truck mainstay team attempted five of the first six races with Toni Breidinger, but made no mention on any of its social media accounts of fielding an entry for Green in Friday’s race. The car was completely unsponsored - and still had a #2 on the roof instead of the #02 on the doors  meaning Green’s first ARCA race since 2001 would likely be a quiet one.

After a few changes throughout the week, the entry list settled at 17 cars for ARCA’s first Mid-Ohio appearance since 1965. Two drivers also entered in the weekend’s NASCAR XFINITY Series race were entered: Brandon Jones took over the helm of Venturini Motorsports’ #25 machine, and Kris Wright, a driver who pilots a Young’s Motorsports entry in the Truck Series, drove the Rette Jones Racing #30 car in Friday’s ARCA race. Camping World Truck Series driver Austin Hill made his first ARCA start since 2018, and it came with his Truck team, Hattori Racing Enterprises. Thad Moffitt was able to secure backing from Dirteeze in order to compete in the event, and his Team DGR car made it to the podium by race’s end. Kyle Sieg continued his part-time schedule, and Russ Lane, who contested three ARCA races last year, made his first appearance of the season. After running in alliance with Empire Racing last season, Lane joined forces with Kimmel Racing for 2021.
Arnout Kok may have been the most interesting storyline in the field on Friday. After an ill-fated partnership with Obaika Racing never hit the track in 2018, Kok, a South African, signed with Fast Track Racing to run a Brand South Africa livery in the race, his first in America. Fast Track’s other three cars were filled by Owen Smith, Tony Cosentino and Stanton Barrett, who took the place of last race’s last-place finisher, DL Wilson. Wilson is now aiming to return at Iowa in July and compete in 13 total races this season. Barrett, surprisingly, did not bring a primary sponsor with him to Fast Track for his first ARCA start since 2001. The one entry that did not make it to the track was Wayne Peterson Racing’s #06 car, set to be driven by Con Nicolopoulos.

The one-hour practice/qualifying combination session was a little hectic for most entries in the field from front to back. Corey Heim managed to grab the pole award with a lap of 1 minute, 27.9 seconds. Owen Smith was the slowest car on track, registering a fastest lap of 2 minutes, 13.7 seconds. However, the last car on the grid was Brad Smith, who did not make a lap in the session and made the field on a provisional.

The Smith vs. Smith battle for last place didn’t even make it past the first corner. While FS1’s cameras couldn’t catch the situation close enough to see if there was any contact with Drew Dollar, they did catch Kris Wright sliding into the gravel trap in turn one. The car remained motionless long enough to draw a caution, and the last-place battle looked to be settled for the day. However, the car re-fired and continued on, making it to the pit road for repairs. Around that same point in time, Tim Richmond went behind the wall due to mechanical issues. Although the Richmond Clubb Motorsports team announced a full schedule ahead of the season, the broadcast noted that the team’s road course entry was in danger of not making it to the track before no less than six teams helped prepare the car to get it on track. While Wright restarted two laps down on lap four, the broadcast verbally indicated that Richmond was out for the race.

After lap five, the cars of Green, Brad Smith, and Cosentino all exited the track, done for the day. The trio was running 15th, 13th, and 12th on the racetrack, respectively. Owen Smith went behind the wall after completing seven laps, completing the Bottom Five for the time being.

However, that was not all. Richmond returned to the track on Lap 11 and passed the trio of Lap 5 retirees on the 15th circuit, relegating Green to last. For a while, it looked like Richmond could catch Drew Dollar, who exited the race after fifteen laps completed, but Richmond returned to the garage for the final time after completing thirteen more laps, leaving him the last member of the Bottom Five. 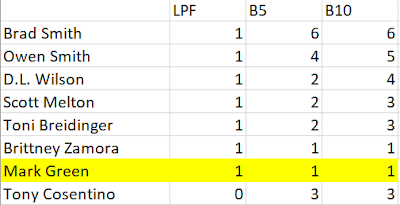