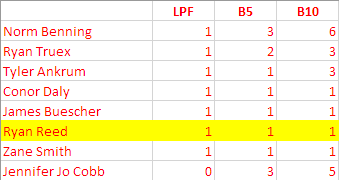 I watched and felt bad for Bayley Currey, who seems to get the most out of his underfunded equipment. Someone should give him a shot. I wished more companies would come back to the sport as I imagine that happening would bring more fans to see their favorite products, race.