Aric Almirola picked up the 13th last-place finish of his NASCAR Cup Series career in Sunday’s Goodyear 400 at the Darlington Raceway when his #10 Smithfield / Winn-Dixie Ford crashed after 5 of 293 laps.
The finish, which came in Almirola’s 364th series start, was his second of the year and first since Las Vegas, eight races ago. In the Cup Series’ last-place rankings, it was the 36th for the #10, the 613th from a crash, and the 707th for Ford. Across NASCAR’s top three series, it was the 128th for the #10, the 974th for Ford, and the 1,252nd from a crash.
Since his crash at Las Vegas, the 2021 season has continued to be a struggle for the veteran from Florida. After an 11th-place run at Phoenix, he ran no better than 20th in the next three races, including a brutal hit in a backstretch pileup during the Bristol Dirt Race. He finally earned his first top-ten finish of the year at Richmond, taking 6th at a track where he’d finished no better than 8th since 2018. But with a 15th at Talladega and a 29th, three laps down at Kansas, he sat a disappointing 28th in the standings.
For Darlington, Almirola would join in the “throwback” festivities by running a flame-covered paint scheme that Mark Martin ran in the XFINITY Series in the year 2000. The red-orange-and-yellow scheme, recreated by Harris Lue, went to victory lane that year in Texas. Martin was part of the team’s unveiling of the scheme on May 3.
Almirola rolled off 27th, but would drop to the rear as his team twice failed inspection. Also dropping to the rear was 6th-place starter Chase Elliott, whose #9 Hooters Chevrolet – decorated like Alan Kulwicki’s Ford Thunderbird from his 1992 Winston Cup Championship. Elliott’s team was penalized for unapproved adjustments, specifically removing a packer from the suspension. Both Elliott and Almirola would take the green behind original 37th-place starter Josh Bilicki, whose #52 Insurance King Ford was itself a throwback to Lennie Pond’s yellow Burger King Chevrolet from 1979.
When the green flag dropped, Elliott was last across the stripe, but both he and Almirola made quick work of the tail end of the field. By the end of Lap 1, the 37th spot now belonged to James Davison in the #15 Hope Givers Ford, a throwback to Dick Johnson’s #38 Redkote Ford from the late 1980s. Davison, who finished last in last September’s Southern 500, fell to 11.393 seconds back of the lead on Lap 4. By then, the car he was following belonged to Quin Houff in the #00 RCA Chevrolet, a throwback to John Andretti’s #98 RCA Ford from 1997. The two remained at the back of the field when the first caution fell on Lap 6.
By then, Almirola had caught and passed Ricky Stenhouse, Jr., who waved him by after his #47 Kroger / Tide Chevrolet bounced off the wall. As Almirola later reported, he was a second faster than the cars ahead of him, but got tight off Turn 2 and checked-up. Stenhouse then gave him a bump, which steered Almirola head-on into the inside wall. The impact bent the body of his car so badly that the front tires were lifted off the ground by the twisted nose. Fortunately, Almirola walked away without serious injury. His car was towed to the garage, done for the afternoon. NASCAR officially declared him out on Lap 34.
Finishing 36th was Almirola’s teammate Cole Custer, whose #41 HaasTooling.com Mother’s Day Ford locked wheels with Anthony Alfredo’s #38 We Care / Alan Kulwicki 1985 Ford coming off Turn 2. Alfredo managed to correct his car while Custer slammed the wall in a manner similar to Almirola, destroying his Ford. Kurt Busch took 35th in the #1 Monster Energy Chevrolet when he broke loose off Turn 4 and hit the inside wall, perhaps after some contact from Bubba Wallace’s #23 Root Insurance / Wendell Scott Toyota. Busch tried to drive his car back to pit road, but stopped after the fluid he leaked caught fire in Turns 1 and 2.
Cody Ware ended up 34th when something broke on his #51 Nurtec ODT / Darrell Waltrip 1990 Chevrolet. The crew looked under the car in the garage, where they first said the yoke broke off the transmission. The next report was the yoke was still on the transmission, but the driveshaft had broken off. With that, the team said they were out of the race on Lap 198, and NASCAR confirmed this on Lap 207. By then, so many cars were multiple laps down on the long green-flag run that teammate Josh Bilicki didn’t climb past Ware until Lap 234. Bilicki, who made two trips to the garage from Laps 141-149 and Laps 176-203, climbed no further and finished 33rd.
LASTCAR STATISTICS
*This marked the first last-place finish for the #10 in a Cup Series race at Darlington.
THE BOTTOM FIVE
37) #10-Aric Almirola / 5 laps / crash
36) #41-Cole Custer / 97 laps / crash
35) #1-Kurt Busch / 106 laps / crash
34) #51-Cody Ware / 188 laps / driveshaft / led 1 lap
33) #52-Josh Bilicki / 245 laps / running
2021 LASTCAR CUP SERIES OWNER'S CHAMPIONSHIP
1st) Motorsports Business Management, Rick Ware Racing, Spire Motorsports, Stewart-Haas Racing (2)
2nd) Chip Ganassi Racing, Front Row Motorsports, Hendrick Motorsports, StarCom Racing (1)
2021 LASTCAR CUP SERIES MANUFACTURER'S CHAMPIONSHIP
1st) Chevrolet (6)
2nd) Ford (4)
3rd) Toyota (2)
2021 LASTCAR CUP SERIES DRIVER'S CHAMPIONSHIP 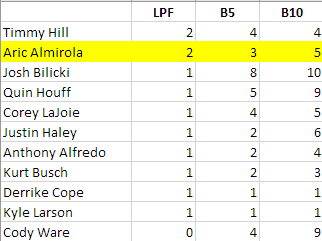