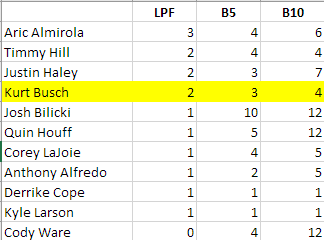 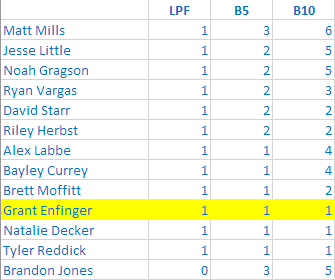 Posted by Brock Beard at 3:52 PM No comments: 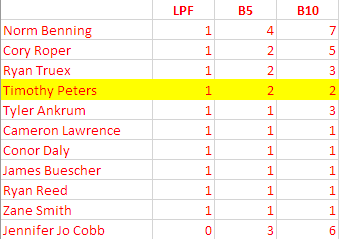 Posted by Brock Beard at 9:09 PM No comments:

PREVIEW: Differing strategies for new teams among storylines for Charlotte

by William Soquet
LASTCAR.info Guest Contributor
Owen Smith picked up the 4th last-place finish of his ARCA Menards Series career in Saturday’s Herr’s Potato Chips 200 at Toledo Speedway when his #01 PendalinPup.com Ford retired with overheating problems after completing 10 of the race’s 200 laps.
The finish came in Smith’s 12th series start and was his first since Gateway in 2020, 12 races ago.
After running nine races in the ARCA Menards Series last season, Owen Smith continued his education at the University of Northwestern Ohio into 2021. He also remained active in racing, testing at Daytona in January and running the season-opening race for Brad Smith Motorsports. Smith also spent some time with his longtime late model team, CTD Racing, which acquired an old Ken Schrader Racing ARCA chassis over the winter.
Toledo marked his second start of the year for Fast Track after also running Kansas for the team. Fast Track brought four cars with Smith in the 01, Dick Doheny in the 10, Tony Cosentino in the 11 and DL Wilson in the 12. Cosentino, a crewman for Rick Ware Racing, ran three K&N West races in 2019 for Patriot Motorsports Group before making his ARCA debut on Saturday.
Only 14 cars made it to the track for the race, six cars less than the previous series race at Kansas and on par with I-44 and Winchester last year for being one of the smallest fields in recent memory. Drew Dollar surrendered the #15 Venturini Motorsports entry to Jesse Love, and Gracie Trotter filled in the #25 Venturini machine from Derek Griffith, who piloted the car last race. Former JR Motorsports late model driver Adam Lemke was scheduled to make his ARCA debut with Rette Jones Racing in the Toledo event, but missed the race due to what RJR called “travel complications”. Taking his place was southern Indiana insurance agent and racecar driver Cole Williams, who made two ARCA starts for Venturini in 2016. Wayne Peterson Racing returned for the first time since Talladega. Instead of their trademark 06 entry, however, the car on Saturday was branded as the #40. Driving the car was A.J. Moyer, the son of 1981 ARCA champion Larry Moyer. He picked up funding from JRC Transportation, a flatbed trucking company on the East Coast. Two more cars were supposed to race but withdrew: Toni Briedinger’s #02 Young’s Motorsports entry and Kyle Sieg’s #28 RSS Racing entry.
Corey Heim led the lone practice session with a lap of just over 16 seconds. Moyer brought up the tail end of the field with a lap of 19.4 seconds, three-tenths slower than the next-fastest car on the track, Alex Clubb. Speeds picked up in qualifying, as Ty Gibbs broke the sixteen-second mark to take the pole. Moyer retained the last spot in the field but broke the 19-second mark to lay down a lap of 18.8 seconds.
Coming to the green, the Smiths - Owen and Brad - filled out Row 7. Moyer was on the outside of Row 6 alongside Consentino. Owen Smith, on the outside of the last row, was outpaced by Brad in turns one and two of the opening lap as the red 48 car drew even with Moyer. Owen Smith and Moyer ran about even pace in the opening stages and were only three-tenths apart when they were ten seconds back of the leaders on Lap 5. Moyer put some distance on Smith by lap nine, when television cameras caught the 01 car being lapped by leader Ty Gibbs in turn one. Brad Smith and Moyer were both lapped on the 10th circuit. Cosentino followed on Lap 12, and D.L. Wilson was lapped on the thirteenth.
Owen Smith was marked as “off” on the leaderboard on Lap 15 and was marked as “out” the following lap, having completed ten circuits. Cosentino retired one lap after Smith, and D.L. Wilson was running in the top ten when he called it a race after 24 laps. Brad Smith battled a number of issues during the race including potential brake issues before retiring due to handling issues. That left a mere ten cars running at the end of the race.
After giving race sponsor Herr’s some extra publicity when he picked up a banner during the race, Doheny finished as the last car running, sixteen laps down at the finish. A.J. Moyer was only one lap ahead of Doheny, and Alex Clubb was only one lap ahead of Moyer, a tight battle for the Bottom Five until the end of the race. Moyer’s ninth-place finish was one spot better than Con Nicolopoulos’ tenth-place finish at Winchester last year and provided another top-ten finish for Wayne Peterson Racing.
THE BOTTOM FIVE
14) #01-Owen Smith / 10 laps / overheating
13) #11-Tony Cosentino / 11 laps / handling
12) #12-DL Wilson / 24 laps / overheating
11) #48-Brad Smith / 135 laps / handling
10) #10-Dick Doheny / 184 laps / running
2021 LASTCAR ARCA MENARDS SERIES MANUFACTURERS CHAMPIONSHIP
1st) Chevrolet (3)
2nd) Ford (2)
2021 LASTCAR ARCA MENARDS SERIES OWNERS CHAMPIONSHIP
1st) Brad Smith Motorsports, Fast Track Racing, Kimmel Racing, Rette Jones Racing, Young’s Motorsports (1)
2021 LASTCAR ARCA MENARDS SERIES DRIVERS CHAMPIONSHIP

Posted by Brock Beard at 6:56 PM No comments: 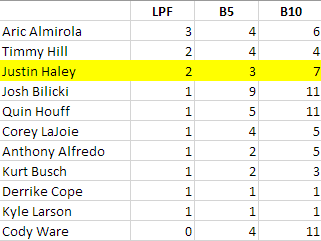 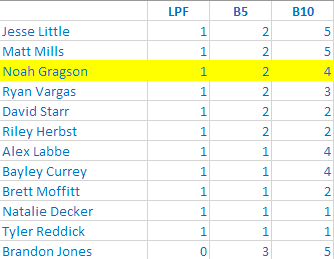 Posted by Brock Beard at 5:11 PM No comments: 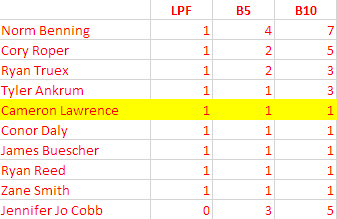 Posted by Brock Beard at 5:06 PM No comments: