Bayley Currey picked up the 3rd last-place finish of his NASCAR XFINITY Series career in Saturday’s Ag-Pro 300 at the Talladega Superspeedway when his #74 Children's National Chevrolet fell out with overheating problems after 34 of 90 laps.
The finish, which came in Currey’s 58th series start, was his first of the season and first in the series since August 8, 2020 at Road America, 23 races ago. In the Cup Series’ last-place rankings, it was the 12th for the #74, the 36th for overheating, and the 567th for Chevrolet. Across NASCAR’s top three series, it was the 52nd for the #74, the 178th for overheating, and the 1,775th for Chevrolet.
Since he was last featured here, Currey and his teammate Kyle Weatherman at Mike Harmon Racing have continued to shown flashes of brilliance. One week after his last-place run at Road America, Currey rebounded to finish 14th on the Daytona Infield Road Course, where the two teammates were on the front row for a late restart, then took 12th in the fall race at Texas. Just last month at Phoenix, Currey ran even better, returning to the site of his lone DNQ in 2020 to finish a career-best 7th – his first top-ten run in the series. This also happened to be the second of three races where Currey ran a bright yellow paint scheme with sponsorship from the Lerner & Rowe law firm, just one measure of MHR’s improving fortunes with sponsorship.
For Talladega, Bret Baier of FOX News got the Children’s National Hospital Foundation in touch with MHR for a special paint scheme. The black, red, and, white Chevrolet would carry the hospital’s logo on the hood, a donation the link on the sides, and several multi-colored handprints reminiscent of many of Joey Gase’s paint schemes promoting organ donation. The Currey car would roll off 25th on the starting grid.
Taking 40th and last was Jason White, back in the XFINITY Series for the first time since Daytona. In place of the former RSS Racing / Reaume Brothers Racing #23 in February, White’s pink-and-blue A-Game Ford was renumbered to the #13 under Carl Long’s Motorsports Business Management team. While no drivers were penalized to start in the rear, by the one to go signal, four cars were behind him in the outside line, including the three B.J. McLeod Motorsports entries: 31st-place Mason Massey in the #99 Special Olympics Georgia Toyota, 34th-place Jesse Little in the #78 Skuttle Tight Chevrolet, and 36th-place Matt Mills in the #5 J.F. Electric Chevrolet. While ranked ahead of his two teammates, it was Massey who lined up last in the outside line behind Little and Mills.
Just 39 drivers took the green, however, as FOX reported Joey Gase had pulled behind the wall with mechanical issues. Gase’s latest organ donation paint scheme was also a “throwback” paint scheme to the #28 Havoline Ford, specifically the version Davey Allison, himself an organ donor, raced from 1991 until his tragic death in 1993. Unfortunately, Gase’s #28 Ford lost fuel pressure and couldn’t get re-fired. It wasn’t until Lap 5 that he returned to action, the only driver off the lead lap.
Despite a lingering threat of rain, the early stages of the race had few crashes and even fewer cars pull behind the wall for mechanical issues. Gase got two of his laps back when Stages 1 and 2 ended without incident. He was still running in 40th until around Lap 35, when Currey reported his car was overheating with temperatures over 280 degrees. Currey pulled behind the wall, and Gase dropped him to last by Lap 41. Jason White, the last-place starter, joined him in the garage early in Stage 3 when a reported tire going down turned out to be a left-front suspension issue. Gse would ultimately climb past him as well, and despite late-race contact with the inside wall finished in 36th place. Between Gase and White were Caesar Bacarella in the #90 AP Sports Regiment / Maxim Chevrolet and Brandon Jones in the #19 Menards / Tuscany Faucets Toyota, both collected in the day’s only wreck on Lap 85.
The Lap 85 wreck signaled the end of a surprisingly strong run for Joe Graf, Jr., who finished last in both XFINITY races at Daytona just last year. Graf entered the Top 10 on Lap 59, climbing up to 8th. He was still in the Top 15 when a possible cut tire caused him to slide up the track off Turn 2, triggering a seven-car accident. Graf’s team managed to get him back on the track to finish in 33rd before rain cut short the event at 90 laps.
Just before the red flag, other underdogs had positioned themselves for strong runs, and would ultimately leave with their cars intact. Both Tommy Joe Martins in the #44 AAN Adjusters Chevrolet and Timmy Hill in the #66 Auto Parts 4 Less Toyota were running around the 18th spot for most of the race, and had climbed to 11th and 13th, respectively, when rain cut the race 23 laps short. Colin Garrett in the #26 11/11 Project Toyota finished 15th for Sam Hunt Racing, just one spot short of a career-best. David Starr, Timmy Hill’s teammate at MBM, finished a season-best 16th in the #61 Whataburger Toyota. Jade Buford, who NASCAR denied a run in Daytona for the Big Machine team, finished 18th in his first Talladega start in the #48 Big Machine Spiked Coolers Chevrolet. Rounding out the Top 20 were JD Motorsports teammates Colby Howard and Landon Cassill, who started 37th and 32nd, respectively.
THE BOTTOM FIVE
40) #74-Bayley Currey / 34 laps / overheating
39) #13-Jason White / 51 laps / suspension / led 1 lap
38) #90-Caesar Bacarella / 84 laps / dvp
37) #19-Brandon Jones / 84 laps / crash
36) #28-Joey Gase / 85 laps / running
2021 LASTCAR XFINITY SERIES OWNER'S CHAMPIONSHIP
1st) RSS Racing / Reaume Brothers Racing (2)
2nd) B.J. McLeod Motorsports, DGM Racing, JD Motorsports, Mike Harmon Racing, Our Motorsports, Stewart-Haas Racing (1)
2021 LASTCAR XFINITY SERIES MANUFACTURER'S CHAMPIONSHIP
1st) Chevrolet (6)
2nd) Ford, Toyota (1)
2021 LASTCAR XFINITY SERIES DRIVER'S CHAMPIONSHIP 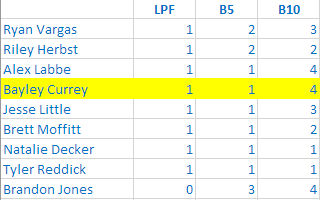 Jason White led one lap on the first lap of stage 2 under caution. Could you please list that?