CUP: Justin Haley completes fewest laps of a Cup race at Richmond since 1994

Justin Haley picked up the 1st last-place finish of his NASCAR Cup Series career in Sunday’s Toyota Owners 400 at the Richmond Raceway when his #77 Diamond Creek Water Chevrolet fell out with engine problems after 1 of the race’s 400 laps.
The finish came in Haley’s 12th series start. In the Cup Series’ last-place rankings, it was the 35th for the #77, the 701st from engine trouble, and the 803rd for Chevrolet. Across NASCAR’s top three series, it was the 48th for he #77, the 1098th from engine trouble, and the 1,774th for Chevrolet.
Despite his upset win at Daytona in 2019, Haley has remained an infrequent competitor in the Cup Series. Last year, he made just three Cup starts, finishing 13th in the Daytona 500, 14th in his first All-Star Race at Bristol, then 11th in the Playoff race at Talladega. The Daytona 500 run came with his current XFINITY team, Kaulig Racing, kicking off a strong season where he scored his first three XFINITY wins – all of them on superspeedways – and finishing 3rd in the series standings. The Cup race at Talladega came with Spire Motorsports’ #77 Chevrolet, the same organization he won with in 2019.
For 2021, Haley continues his full-time effort in the XFINITY Series with Kaulig, but has also committed to more Cup races with Spire. The Richmond race would mark his seventh start in nine races this year. He’d finished under power in all but one of those starts – last week in Martinsville, he was collected in the day’s biggest wreck and finished 35th. His best in the series so far remains a 24th at both the Daytona Road Course and at Phoenix. He’d start 34th in Sundays race, two spots ahead of teammate Corey LaJoie in the #7 Schluter Systems Chevrolet.
Starting 38th and last on the grid was Austin Cindric, back in the fourth Penske Racing entry for the first time since Atlanta. No drivers were sent to the rear for pre-race penalties, and when the race went green, Haley pulled ahead of 37th-place starter Garrett Smithley in the #53 Trophy Tractor Ford, 4.185 seconds back of the leader.
On that same first lap, Haley’s car abruptly shut off, and he coasted down pit road. “Feels like no power at all,” he said as he completed the first lap. The team had selected Stall 22, the fourth stall past the start/finish line, which allowed him to complete the first lap by the time he reached it. The driver reported he “spiked the rpms,” and the crew put the car on jack stands as he continued to lose laps. With the car’s digital dash now shut off, the crew took the car off the stands and pushed it behind the wall on Lap 7, which NASCAR reported as a mechanical issue.
“I think it’s killed,” said Haley on Lap 18. “Like it just fuckin’ grenade the motor.” The driver also reported his car apparently came out of gear. By Lap 28, the crew gave two sets of their sticker tires to teammate Corey LaJoie. Work continued until around Lap 35, when the team posted on Twitter that they were done for the day “due to mechanical failure.” The official word from NASCAR came soon after, declaring him out with engine trouble.
Haley turned out to be the race’s only retiree as the rest of the field remained within 16 laps of race winner Alex Bowman. The next three spots belonged to three-fourths of Rick Ware Racing’s team: Josh Bilicki in the #52 Insurance King Ford, Cody Ware in the #51 Nurtec ODT Chevrolet, and Garrett Smithley in the #53 Trophy Tractor Ford. The fourth member, James Davison in the #15 Jacob Companies Chevrolet, edged Quin Houff in the final laps to drop the #00 Mount-N-Lock Chevrolet into the 34th spot.
LASTCAR STATISTICS
*This marked the fewest laps a Cup Series driver has completed in a race at Richmond since March 6, 1994, when Dick Trickle’s #32 Mett’s Tours Chevrolet crashed out after 1 lap of the Pontiac Excitement 400. A Cup Series last-place finisher hasn’t failed to complete a lap at Richmond since September 13, 1981, when Mike Alexander’s #37 Rogers Auto Leasing Buick had wiring issues in the Wrangler Sanfor-Set 400.
*Haley now has three last-place finishes – one in each of NASCAR’s top three series. Sunday joined the October 31, 2015 Truck Series race at Martinsville and the August 15, 2020 XFINITY race on the Daytona Infield Road Course. He thus becomes the 37th driver to complete the LASTCAR Triple Crown: 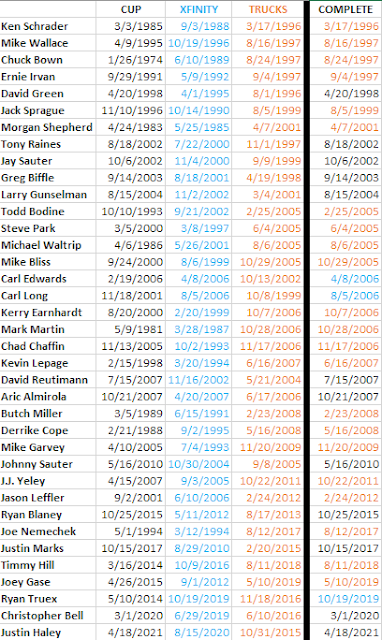 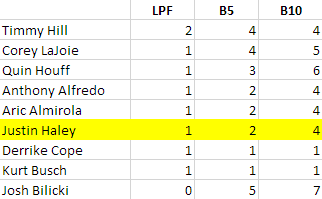