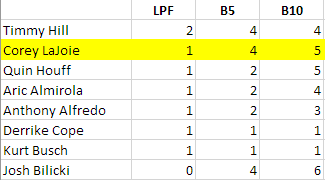 This is funny stuff but also highlights the small teams and their sponsors. Thank you Brock.