Kyle Larson picked up the 8th last-place finish of his NASCAR Cup Series career in Sunday’s GEICO 500 at the Talladega Superspeedway when his #5 HendrickCars.com Chevrolet lost the engine after 3 of 191 laps.
The finish, which came in Larson’s 233rd series start, was his first of the season and first in Cup since November 17, 2019 at Homestead, 46 races ago. In the Cup Series’ last-place rankings, it was the 21st for the #5, the 702nd from engine trouble, and the 804th for Chevrolet. Across NASCAR’s top three series, it was the 34th for the #5, the 1,099th from engine problems, and the 1,776th from Chevrolet.
Larson’s return to the Cup Series has also been a throwback of sorts for Hendrick Motorsports, who brought back the iconic #5, the team’s founding entry. Similar to 1984, when Geoffrey Bodine’s win at Martinsville saved the team from closing, Larson has run with limited backing in 2021. Talladega marked the sixth time in ten races that logos for Hendrick’s own dealerships adorned his Chevrolet. The blue-and-white scheme was itself a “throwback” to the XFINITY and Truck Series entries run by Ricky Hendrick and Brian Vickers. The first time the scheme ran in Cup was this year at Las Vegas, where Larson scored his first Cup win since 2019. He very nearly took the checkers again at Atlanta, leading 269 of 325 laps before Ryan Blaney completed a late-race pass.
Coming into Talladega, Larson sat sixth in the series standings and would line up 12th on the grid. In twelve previous starts, he’d finished inside the Top Ten only twice, and hadn’t run better than 11th since 2016. Three of his previous four cup starts there ended in crashes, including a last-place run in 2018 and a 39th out of 40 – ahead of Spencer Boyd – in the fall of 2019.
Rolling off 40th was Timmy Hill, who after the Motorsports Business Management team wasn’t entered in back-to-back Cup races was set to run double-duty in Talladega. Hill’s #66 Supreme Transportation Toyota would be joined at the rear by 33rd-place Cody Ware, whose #51 Nurtec ODT Chevrolet had multiple inspection failures, and 31st-place B.J. McLeod for unapproved adjustments on his gold-and-white Red Farmer “throwback” scheme by David Marrero, the #78 Long-Lewis Automotive Group Ford.
In addition, six of the seven Toyota teams – excluding only 9th-place Kyle Busch in the #18 Interstate Batteries Toyota – dropped to the rear for unapproved adjustments on pit road relating to their a-posts. Of these Toyotas, Harrison Burton, making his Cup debut in the Gaunt Brothers’ #96 Dex Imaging Toyota, was ultimately the last car to cross the stripe when the green flag dropped, 3.531 seconds back of the lead.
Burton remained in last at the end of Lap 1, but by the start of Lap 3, Larson pulled to the high lane and dropped off the pace. Larson reported his water temperature had spiked, and made an unscheduled green-flag stop. As the crew looked under the hood, they discovered a protective panel had been left on the radiator after the team unloaded, causing the temperature to climb to over 300 degrees. The panel was removed, but when Larson returned to the track on Lap 5, three laps down, his car was still off the pace. On Lap 7, Larson reported his car slowed down, and he said his car stopped running as he came to pit road. With smoke trailing from behind his car, Larson came to his pit stall a second time, then was pushed to the garage. NASCAR Officials declared him out of the race on Lap 24.
Finishing 39th was Joey Logano, who walked away from a frightening wreck on Lap 60. While battling for the lead at the end of Stage 1, Logano’s #22 Autotrader Ford was turned sideways and caught air, tumbling to the stop on the apron. Alex Bowman, last week’s Richmond winner, whose #48 Ally Chevrolet made it 123 laps before he was eliminated by the Damaged Vehicle Policy following a spin with teammates William Byron and Chase Elliott through the infield grass. Quin Houff suffered damage entering pit road, then wrecked his #00 Permatex Chevrolet on Lap 172 following a right-front tire failure. Rounding out the Bottom Five was Josh Bilicki, who ended up 11 laps down in Rick Ware Racing’s #52 Jacob Companies Ford.
Making only his third Cup start, and only the fourth in the series for Kaulig Racing, Kaz Grala charged from 38th on the grid to finish an impressive 6th in the #16 Hyperice Chevrolet. His was one of a number of impressive runs by underfunded efforts, including Ryan Preece, whose #37 Kroger / Reese’s Chevrolet led nine laps and was in the Top Five for much of the day before finishing 14th, J.J. Yeley, who got the #15 Arrowhead Brass Chevrolet up to 10th briefly in the final stage, and Harrison Burton, who battled into the Top Ten in the final laps before finishing 20th in his Cup debut.
LASTCAR STATISTICS
*This marked Larson’s second last-place finish in a Cup race at Talladega, and first since April 29, 2018, when he crashed out after 71 laps of this same spring race.
*This was the first last-place run for the #5 since October 11, 2015, when Kasey Kahne – driving another throwback HendrickCars.com paint scheme, this time honoring Geoffrey Bodine’s 1984 car – was eliminated in a crash after 58 laps of the Bank of America 500 at Charlotte. The number last finished in the back in a Cup race at Talladega on April 26, 2009, when Mark Martin’s Carquest / Kellogg’s Chevrolet was collected in a multi-car crash after 6 laps of the Aaron’s 499.
THE BOTTOM FIVE
40) #5-Kyle Larson / 3 laps / engine
39) #22-Joey Logano / 59 laps / crash / led 10 laps
38) #48-Alex Bowman / 123 laps / dvp
37) #00-Quin Houff / 168 laps / crash
36) #52-Josh Bilicki / 180 laps / running
2021 LASTCAR CUP SERIES OWNER'S CHAMPIONSHIP
1st) Motorsports Business Management, Spire Motorsports (2)
2nd) Chip Ganassi Racing, Front Row Motorsports, Hendrick Motorsports, Rick Ware Racing, StarCom Racing, Stewart-Haas Racing (1)
2021 LASTCAR CUP SERIES MANUFACTURER'S CHAMPIONSHIP
1st) Chevrolet (6)
2nd) Ford, Toyota (2)
2021 LASTCAR CUP SERIES DRIVER'S CHAMPIONSHIP 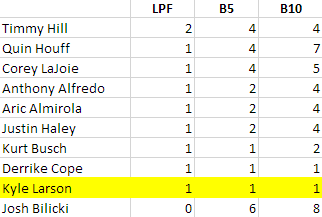 LOL. This last place site is hilarious. I admire how you always include the sponsor and car manufacturer. It gives little teams, for those that pay attention, some exposure. I've been reading all of your articles for about 4 years.

Thank you for your readership! I'm glad you noticed I like mentioning the sponsors, especially now that they change so often, yet don't always get TV time.