Brett Moffitt picked up the 2nd last-place finish of his NASCAR XFINITY Series career in Saturday’s EchoPark 250 at the Atlanta Motor Speedway when his #02 Fr8 Auctions Chevrolet was collected in a multi-car pileup after 39 of 163 laps.
The finish, which came in Moffitt’s 38th series start, was his first of the year and first since October 10, 2020 on the Charlotte “Roval,” ten races ago. In the XFINITY Series last-place rankings, it was the 6th for the #02, the 344th from a crash, and the 565th for Chevrolet. Across NASCAR’s top three series, it was the 30th for the #02, the 1,244th from a crash, and the 1,768th for Chevrolet.
One year ago, Moffitt was brought on by Chris Our to run the first few races of the season for the start-up Our Motorsports team. By the summer, he was their regular driver, yielding a season-best 5th at Talladega among seven top-ten finishes. He did all this while running the full Truck Series season, where he nearly took the title until a late-race caution handed it to GMS Racing teammate Sheldon Creed.
Over the offseason, Moffitt committed to a full XFINITY and Truck Series schedule in 2021, moving to Niece Motorsports’ #45 on the Truck side and full-time in Our’s #02 in XFINITY. He’d originally been slated to be joined by a teammate in the #03 Chevrolet. But when rain cancelled qualifying at Daytona, and the next several races used metric qualifying, the team looked to acquire a second entry instead. At Homestead, they collaborated with the RSS Racing / Reaume Brothers #23, which Tyler Reddick drove to a runner-up finish before he was disqualified for failing post-race heights. Prior to that, Moffitt was also in contention for the win before a late-race tire issue left him 7th. Both did this without a primary sponsor on their white Chevrolets.
Moffitt would have a sponsor in Atlanta in Fr8 Auctions, which was also the presenting sponsor for the Truck Series race he’d run earlier that Saturday. Set to roll off 10th, the team then discovered an engine issue and pushed his #45 Overton’s Chevrolet behind the wall to change it out. They barely got the truck back to the grid in time for the command to start engines. After incurring a pre-race tail-end penalty, Moffitt recovered to finish 9th. He’d line up 8th in the day’s XFINITY race.
Rolling off 40th and last was Chad Finchum, who this week drove Motorsports Business Management’s unsponsored #13 Toyota. The preliminary entry list showed him in the #61 with teammate David Starr in the #13, but by the time the teams loaded up, it was revealed the two had swapped rides, putting both Finchum and 38th-place Starr to the tail end of the field. Also joining them was A.J. Allmendinger, whose #16 Ellsworth Advisors Chevrolet failed inspection three times due to a rear camber issue, costing him 3rd on the grid.
When the race started, it was B.J. McLeod’s team once again in the final spot, following up a difficult afternoon last week in Phoenix. This time, it was Matt Mills in the #5 J.F. Electric Chevrolet running 40th after Lap 1, then teammate Mason Massey in the #99 Gerber Collison & More Toyota. By Lap 5, the spot fell to Dexter Bean, whose #90 Badger Environmental & Earthworks Chevrolet was fighting a loose condition. By Lap 15, Bean became the first driver one lap down.
On Lap 22, during pit stop under caution, the spot fell to Joe Graf, Jr. in the #07 Hazeheart.com Chevrolet. But Graf sped past Bean on the Lap 25 restart, and the #90 remained a handful. So much so, in fact, that on Lap 36, he spun off Turn 2 and brought out a caution of his own, the left-rear tire flat. That same time by, another driver immediately entered the battle. Gray Gaulding’s #52 SVS Vision Chevrolet had been eligible for the Lucky Dog until he pulled behind the wall with an apparent carburetor issue. Thus, while Bean returned to the track, Gaulding took over last place on Lap 37.
Moffitt didn’t enter the last-place battle until Lap 40 - the one-lap sprint to end Stage 1. Heading down the backstretch, Moffit was running in 5th when Brandon Jones’ #19 Menards / Pentair Toyota pulled to his outside, then attempted to complete a pass. The two cars came together, and Jones spun back into traffic, slamming Moffitt into the outside wall and triggering a multi-car pileup in Turn 3. Of those involved, only Moffitt was eliminated. Jones managed to clear the clock with heavy right-front damage to finish 37th.
Meanwhile, Gaulding’s engine re-fired in the garage area on Lap 45, and he returned to action 11 laps down. After a pit stop for fuel, he rejoined the tail end of the field, and dropped Moffitt to last place on Lap 51. NASCAR didn’t confirm Moffitt out officially until Lap 71. Also declared out that time by was Finchum, who pulled behind the wall on Lap 61 with brake issues. Completing the Bottom Five was Josh Berry, who spun off Turn 4 n Lap 38, then made an ill-fated right-hand turn into the grass, obliterating the nose of his #8 Tire Pros Chevrolet.
LASTCAR STATISTICS
*This marked the first last-place finish for the #02 in an XFINITY Series race at Atlanta.
THE BOTTOM FIVE
40) #02-Brett Moffitt / 39 laps / crash
39) #13-Chad Finchum / 59 laps / brakes
38) #8-Josh Berry / 130 laps / crash
37) #19-Brandon Jones / 132 laps / running
36) #52-Gray Gaulding / 150 laps / running
2021 LASTCAR XFINITY SERIES OWNER'S CHAMPIONSHIP
1st) RSS Racing / Reaume Brothers Racing (2)
2nd) B.J. McLeod Motorsports, DGM Racing, Our Motorsports, Stewart-Haas Racing (1)
2021 LASTCAR XFINITY SERIES MANUFACTURER'S CHAMPIONSHIP
1st) Chevrolet (4)
2nd) Ford, Toyota (1)
2021 LASTCAR XFINITY SERIES DRIVER'S CHAMPIONSHIP 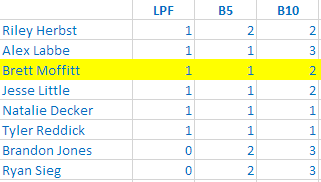