C.J. McLaughlin picked up the 1st last-place finish of his NASCAR XFINITY Series career in Saturday’s Desert Diamond Casino West Valley 200 at the Phoenix Raceway when his #93 Sci Aps Chevrolet was involved in a multi-car accident after 27 of 206 laps.
The finish came in McLaughlin’s 11th series start. In the XFINITY Series’ last-place rankings, it was the 45th for the #93, the 339th from a crash, and the 561st for Chevrolet. Across NASCAR’s top three series, it was the 95th for the #93, the 1,234th from a crash, and the 1,758th for Chevrolet.
McLaughlin made his way into NASCAR’s national competition just last year, when he finished 23rd in his Truck Series debut at Iowa, driving for Reaume Brothers Racing. He then began to run part-time for RSS Racing’s XFINITY program at New Hampshire, swapping car numbers with Ryan Sieg in the flagship #39. He ran 28th that day, eight laps down, then improved to a season-best 23rd at Bristol in a one-off for B.J. McLeod Motorsports. McLaughlin ran a reduced schedule in 2020, continuing to split time with Sieg and McLeod. In his most recent race at Texas, he improved to a new career-best with a 20th-place run in the McLeod #78.
For Phoenix, McLaughlin rolled off 35th in the RSS #93, the same team which finished last just last Saturday in Martinsville with Josh Reaume.
Starting 37th and last was Stan Mullis, who was making his first XFINITY Series start since September 20, 2019 at Richmond. “Let’s have a good clean day here,” Mullis was told on the radio. He was also informed to turn on the brake fans to his #66 Sharelife Vacations Toyota before the start so he wouldn’t have to worry about them under green. With no drivers sent to the rear for pre-race penalties, Mullis remained in the last spot until Lap 2, when the first caution came out.
Coming off Turn 2, Jeffrey Earnhardt was running around the 24th spot when his #0 Contec Chevrolet unexpectedly shut down off the corner, causing B.J. McLeod to rear-end him in the #78 Koolbox Chevrolet. The contact sent Earnhardt spinning into the inside wall, destroying the right-rear of his car and pushing in the right-front. The incident promptly dropped Earnhardt to last, and he was the first to lose a lap as the crew set to work piecing the rear clip back together with bear bond. The team then ran out of tape and sent him back out on Lap 4, when the driver said the car was “still cutting in and out.” Combined with a dragging track bar mount, this forced Earnhardt to pit road a second time. McLeod cleared the “Crash Clock” on Lap 8, then Earnhardt did the same on Lap 10. By Lap 23, when the team received confirmation they reached minimum speed, Earnhardt went to the garage for a battery replacement.
During all this, Earnhardt’s teammate Jesse Little also had issues on the #4 JD Motorsports Chevrolet and dropped at least five laps back. Timmy Hill had a right-rear tire rub on his #13 RoofClaim.com Toyota. And Daniel Hemric pulled into the garage area with a stuck throttle on his #8 Poppy Bank Chevrolet. Hemric returned to action on Lap 24, followed by Earnhardt on Lap 28, when trouble broke out once more.
Heading into Turn 2, McLaughlin was in heavy traffic when he was collected in a multi-car pileup with J.J. Yeley in the #61 Workpro Tools Toyota, Donald Theetge in the #90 Theetge Chevrolet Chevrolet, and Matt Mills in the #5 J.F. Electric Chevrolet. Yeley and Mills were against the outside wall before each started rolling, and Theetge’s heavily-damaged car began to roll on the apron, but McLaughlin was stuck facing the wrong way in the middle of the track. McLaughlin tried to get the car refired, and didn’t climb out as crews arrived, knowing he’d be out of the race if he did. The driver then said he thought the rear end was broken, and confirmed with the crew he had the clutch in. By Lap 31, McLaughlin was back on pit road, where the crew put new tires on it, then went to the garage. At that moment, they were out under the “Damaged Vehicle Policy.” Theetge joined him around the same time, and was classified 36th, with Mills’ car making it nine more laps before damage took him out on Lap 41. It was around this time McLaughlin took last from Earnhardt.
Rounding out the Bottom Five were Tommy Joe Martins, whose #44 Red Angus Chevrolet briefly led by staying out under caution, but lost an engine after 73 laps, and Ryan Vargas, whose #6 Tik Tok Chevrolet lost 82 laps with mechanical issues, then returned to finish under power.
LASTCAR STATISTICS
*McLaughlin becomes the fourth different driver to finish last in RSS Racing’s #93 at Phoenix, joining Jeff Green, Jordan Anderson, and Gray Gaulding.
THE BOTTOM FIVE
37) #93-C.J. McLaughlin / 27 laps / crash
36) #90-Donald Theetge / 27 laps / crash
35) #5-Matt Mills / 36 laps / crash
34) #44-Tommy Joe Martins / 73 laps / engine
33) #6-Ryan Vargas / 124 laps / running
2020 LASTCAR XFINITY SERIES OWNER'S CHAMPIONSHIP - FINAL
1st) Motorsports Business Management (9)
2nd) JR Motorsports (4)
3rd) Joe Gibbs Racing, Mike Harmon Racing, RSS Racing (3)
4th) JD Motorsports, Jimmy Means Racing, Shepherd Racing Ventures, SS-Green Light Racing (2)
5th) B.J. McLeod Motorsports, Jeremy Clements Racing, Kaulig Racing, Our Motorsports (1)
2020 LASTCAR XFINITY SERIES MANUFACTURER'S CHAMPIONSHIP - FINAL
1st) Chevrolet (21)
2nd) Toyota (12)
2020 LASTCAR XFINITY SERIES DRIVER'S CHAMPIONSHIP - FINAL 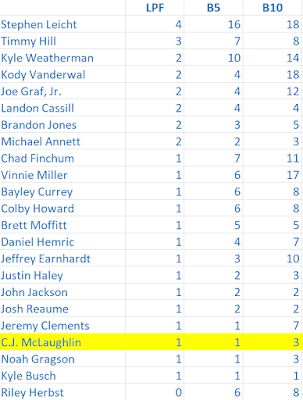