Josh Reaume picked up the 3rd last-place finish of his NASCAR Gander RV & Outdoors Truck Series career in Friday’s Lucas Oil 150 at the Phoenix Raceway when his #00 Levrack Chevrolet fell out after 44 of 156 laps because of brake issues.
The finish, which came in Reaume’s 52nd series start, was his second of the season and second in a row. In the Truck Series’ last-place history, it was the 8th for the #00, the 27th from brake issues, and the 399th for Chevrolet. Across NASCAR’s top three series, it was the 42nd for the #00, the 163rd for brake issues, and the 1,757th for Chevrolet.
With the finish, Norm Benning locked-up the 2020 LASTCAR Truck Series Championship despite not entering the season’s final race. Johnny Sauter and Tanner Gray, the only other drivers with two last-place finishes coming into Friday’s race, finished 11th and 15th, respectively. Reaume’s finish brought him into a five-way tie for the most last-place runs in the series in 2020, joining Bryant Barnhill, who likewise wasn’t entered.
Following a difficult weekend in Martinsville where he finished last in both the Truck and XFINITY Series races, Reaume would again run his #00 in the season finale at Phoenix. The preliminary entry list indicated Reaume would run a Toyota, but NASCAR’s leaderboard showed him in a Chevrolet. This time, his teammate would be Akinori Ogata, who brought sponsorship from Shinano Pneumatic Tools to the #33 Toyota. Reaume drew the 31st starting spot, two places behind Ogata in 29th.
Rolling off 33rd and last in the shortest series field since Gateway in August was Robby Lyons, back in Diversified Motorsports Enterprises’ #97 Sunwest Construction Chevrolet. While no drivers were sent to the rear for pre-race penalties, Reaume dropped from 31st to last as the field crossed the stripe, 4.467 seconds back of the leader and more than six-tenths of a second back of Lyon. By Lap 3, Reaume reported he had a possible brake issue, and he came down pit road under green on Lap 7. The driver first wanted to check tire wear and also the track bar raised three or four rounds, then made a late call for five rounds. The team reported the only made one turn, and the #00 returned to the track at least four laps down.
On Lap 14, Reaume called for the remaining turns on the track bar, and also to check the front tires. He also asked for updates on if any other driver fell out of the race. At the time, the next truck in line was Jennifer Jo Cobb, whose #10 Fastener Supply Company Chevrolet was two laps down. Reaume pitted on Lap 15, then returned by Lap 18. By then, NASCAR was warning him to pick up his speed as he was over the minimum speed of 31 seconds flat. On Lap 21, Reaume pulled behind the wall, making the quick decision to do so in order to avoid receiving the black flag.
With no one else in the garage area, Reaume re-fired the engine on Lap 40 and rejoined the action at least 30 laps down, just moments before the end of Stage 1. His speed on Lap 57 was 30.50 seconds, a half-second under the minimum speed. He pitted once again on Lap 62 for the team to check tire wear, then pulled into the garage a second time. The team then looked for the wedge wrench and looked under the hood to make further adjustments. He re-fired the engine on Lap 87 and was once more on the track just before the end of Stage 2, with still no one else in the garage. By Lap 90, he was 58 laps down with just 59 laps to go, and both driver and team knew there was little chance they could climb out of last place.
On Lap 98, Cobb was still on the track, just a handful of laps down. Reaume was told if she made two more laps, they wouldn’t be able to catch her even if she dropped out. So on Lap 99, Reaume said “Coming in – we’re not gonna make it,” and was reported behind the wall on Lap 101. Just two laps later came the first accident of the night when Carson Hocevar’s #42 Scott’s / GM Parts Now Chevrolet backed into the wall in Turn 2. On Lap 113, Hocevar was declared out by NASCAR for the crash along with Reaume for brake issues.
Cobb and the rest of the field finished under power, her #10 taking the 31st spot, nine laps down. Akinori Ogata, Reaume’s teammate, took 30th, three laps ahead of Cobb, and two laps behind last-place starter Robby Lyons.
LASTCAR STATISTICS
*This marked the first last-place finish for the #00 in a Truck Series race at Phoenix.
THE BOTTOM FIVE
33) #00-Josh Reaume / 44 laps / brakes
32) #42-Carson Hocevar / 103 laps / crash
31) #10-Jennifer Jo Cobb / 147 laps / running
30) #33-Akinori Ogata / 150 laps / running
29) #97-Robby Lyons / 152 laps / running
2020 LASTCAR TRUCK SERIES OWNER'S CHAMPIONSHIP - FINAL
1st) Reaume Brothers Racing (6)
2nd) Niece Motorsports (3)
3rd) CMI Motorsports, DGR-Crosley, Norm Benning Racing, ThorSport Racing (2)
4th) FDNY Racing, Halmar Friesen Racing, Jennifer Jo Cobb Racing, Spencer Davis Motorsports, Young’s Motorsports (1)
2020 LASTCAR TRUCK SERIES MANUFACTURER'S CHAMPIONSHIP – FINAL
1st) Chevrolet (15)
2nd) Ford (5)
3rd) Toyota (3)
2020 LASTCAR TRUCK SERIES DRIVER'S CHAMPIONSHIP - FINAL 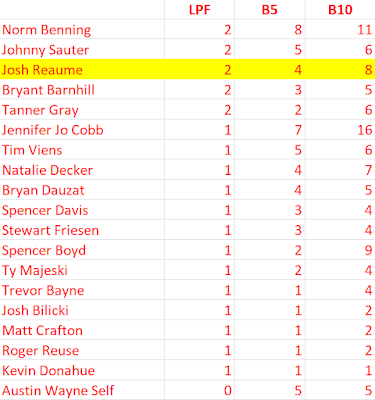