Garrett Smithley picked up the 3rd last-place finish of his NASCAR Cup Series career in Sunday’s XFINITY 500 at the Martinsville Speedway when his #77 DECK Leadership Chevrolet fell out with electrical issues after 100 of 500 laps.
The finish, which came in Smithley’s 42nd series start, was his second of the year and first since May 27th at Charlotte, 27 races ago. In the Cup Series’ last-place rankings, it was the 34th for the #77, the 39th from electrical trouble, and the 798th for Chevrolet. Across NASCAR’s top three series, it was the 47th for the #77, the 129th from electrical problems, and the 1,756th for Chevrolet.
Since Ryan Preece did not finish last in Sunday’s race, Timmy Hill locked-up the 2020 LASTCAR Cup Series Championship. One of Hill’s five last-place finishes came in the most recent Martinsville race this past June.
After his most recent feature on this site, Smithley has driven for four of the sister teams under the Rick Ware Racing / Premium Motorsports alliance, including the cars leased to both B.J. McLeod Motorsports and Tommy Baldwin Racing. His best run of the year remains a 24th in the Brickyard 400, driving Ware’s #53 Axele Chevrolet. He’d also made five XFINITY starts for SS-Green Light Racing, most recently at Talladega, where he surprised with a strong 8th-place finish. His one-off Truck Series start remains his only start in the series this year, a 36th for Niece Motorsports.
Smithley would this week run for Spire Motorsports, another team under the Ware / Premium banner. After their surprise win at Daytona last year, the team’s best finishes of 2020 have come with the duo from Kaulig Racing’s XFINITY team. Ross Chastain finished 16th under the lights at Daytona while Justin Haley, who got the team into the All-Star Race with his win, gave the team its best finish of the year in 11th. Of the remaining starts between Reed Sorenson, J.J. Yeley, Josh Bilicki, James Davison, B.J. McLeod, Stanton Barrett, and Smithley, the team had finished no better than 24th.
For Martinsville, Yeley was listed as driver of both the Spire #77 and the Ware #27, but this was then corrected at midweek with Smithley taking over the #77. It would be Smithley’s first start in this car since Loudon on August 2, where he ran 31st. This time around, he had picked up sponsorship from DECK Leadership, a workplace diversity initiative. Smithley started 36th, but would incur a tail-end penalty due to the driver swap with Yeley.
Rolling off 39th and last was Joey Gase, who had been dealing with sponsorship issues all week. On October 27, Gase tweeted a picture of his unmarked black Ford and provided his e-mail address for sponsorship inquiries. On Halloween came backing from Whitetail Smokeless on the C-post, a rear decklid logo from the Gas ‘N Go Podcast, and a B-post sticker from Jwow & Clashin Racing. Gase’s hood was then decorated with logos from the more than 30 different companies that backed him during the season, similar to Clint Bowyer’s own sponsorship “thank you” message on his rear decklid.
In the early laps, both Gase and Smithley dropped Quin Houff to last in the #00 Units Chevrolet. Houff was still running there when Michael McDowell’s left-rear tire started smoking on his #34 Car Parts Ford. Around Lap 11, Jimmie Johnson made contact with McDowell’s left-rear, pushing in the fender and causing the smoke. Stuck on the outside lane, the tire finally came apart after Gase bumped his way by on the inside, forcing the #34 to pit road on Lap 15. McDowell promptly took last place from Houff and lost multiple laps before he returned to the track. When Gase’s car stalled after the team dropped him off the jack on pit road, the #51 wound up on the same lap as McDowell, and the two started trading last place. Gase took the spot on Lap 69, McDowell on Lap 78, then Gase again on Lap 84.
Smithley, meanwhile, had also lost several laps, and was shown five down on Lap 104, when the caution fell. Smithley’s car had slowed entering Turns 3 and 4, then come to a stop against the outside wall near the exit of the fourth corner. The car went behind the wall, and took last from Gase on Lap 107. NASCAR declared Smithley out of the race on Lap 140. Smithley tweeted later that he’d moved up eight spots in the early laps before his issues, and was pleased with the speed of his car.
Finishing 38th was Chris Buescher, who dropped a full lap’s worth of fluid around the track after he rear-ended Daniel Suarez with his #17 Fifth Third Bank Ford. Brennan Poole took 37th after he hit the wall with his #15 Thriv5 Chevrolet, damaging the right-front suspension. James Davison took 36th, ending a solid start to his race in the #53 VIR Ford before the alternator failed, stranding him in Turn 2. William Byron rounded out the group after his #24 Liberty University Chevrolet backed into the outside wall and had to be towed to the garage.
LASTCAR STATISTICS
*This marked the first last-place finish for the #77 in a Cup Series race at Martinsville since October 15, 2001, when Robert Pressley’s #77 Jasper Engines Ford crashed out after 53 laps of the Old Dominion 500.
*Smithley is only the second Cup driver to finish last at Martinsville due to electrical issues. The only other occurrence came on October 21, 2007, when Aric Almirola scored his first last-place finish in the #01 U.S. Army Chevrolet after 111 laps of the Subway 500.
THE BOTTOM FIVE
39) #77-Garrett Smithley / 100 laps / electrical
38) #17-Chris Buescher / 146 laps / crash
37) #15-Brennan Poole / 184 laps / crash
36) #53-James Davison / 422 laps / electrical
35) #24-William Byron / 439 laps / crash
2020 LASTCAR CUP SERIES OWNER'S CHAMPIONSHIP
1st) JTG-Daugherty Racing (7)
2nd) Motorsports Business Management, Rick Ware Racing (6)
3rd) Chip Ganassi Racing (3)
4th) Hendrick Motorsports, Leavine Family Racing, Penske Racing (2)
5th) Beard Motorsports, B.J. McLeod Motorsports, Front Row Motorsports, Joe Gibbs Racing, Spire Motorsports, StarCom Racing, Tommy Baldwin Racing (1)
2020 LASTCAR CUP SERIES MANUFACTURER'S CHAMPIONSHIP
1st) Chevrolet (22)
2nd) Toyota (9)
3rd) Ford (4)
2020 LASTCAR CUP SERIES DRIVER'S CHAMPIONSHIP 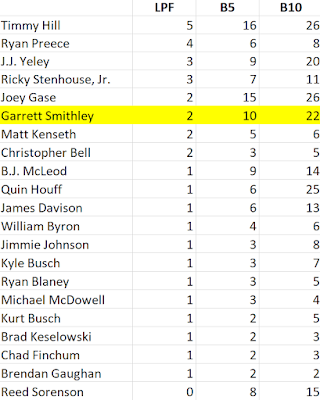