Colby Howard picked up the 2nd last-place finish of his NASCAR XFINITY Series career in Saturday’s Ag-Pro 300 at the Talladega Superspeedway when his #15 Guy Roofing Chevrolet was collected in a multi-car accident after 45 of 113 laps.

Since he was last featured on this website in June, Michael Annett had become one of the most consistent drivers in the XFINITY Series. He finished no worse than 18th in the next four races, then starting at Pocono began a streak of seven straight top-ten finishes. After a 15th on the Daytona infield road course, he began the streak anew, finishing between 7th and 9th in the next six straight races before Bristol once again turned ugly, leaving him 31st. By then, he’d secured a Playoff berth for Las Vegas, where just last week he took home still another 7th-place run. He’d take the green at Talladega from 9th on the grid.
Starting 37th and last on Saturday was Timmy Hill, who had continued to turn heads with his strong runs on the XFINITY side in Motorsports Business Management’s #66 CrashClaimsR.us Toyota. No drivers would join him at the back of the field prior to the start. However, in the early laps, Kody Vanderwal went behind the wall with ignition issues, and by Lap 10 was shown seven laps down in last place. At the time, only he was one of only two drivers off the lead lap, joined by Vinnie Miller, two down in B.J. McLeod’s #78 Koolbox Chevrolet. This trend would continue for much of the race’s first half as Miller got both his laps back with Lucky Dogs while the rest of the field remained on the lead lap. Vanderwal’s crew completed repairs and returned to action 14 laps down with all 36 other drivers still running.
On the Lap 47 restart, the last-place battle suddenly appeared over. Coming to the stripe, Ross Chastain’s #10 Dyna-Gro Seed Chevrolet was spun by Harrison Burton’s #20 Dex Imaging Toyota. As the field scattered, Colby Howard couldn’t avoid Chastain and slammed into the right side of the Chevrolet, destroying his #15 Guy Roofing Chevrolet. With Vanderwal back in action, it wasn’t until Lap 62 that he dropped Howard to last place. From there, the attrition picked up, and Vanderwal climbed to 28th at the finish, the last car running under power.
Taking 36th unofficially was Riley Herbst, whose #18 Monster Energy Toyota was eliminated under the Damaged Vehicle Policy following a Lap 43 tangle with Austin Hill. Hill was also involved in the incident that put Austin Cindric and Jeffrey Earnhardt into the Bottom Five. During green-flag pit stops on Lap 76, the trio were turned into the inside wall, both from avoiding other cars or getting bumped from behind. Hill’s #61 AISIN Group Toyota and Cindric’s #22 Carquest Auto Parts Ford struck the inside wall nearly head-on while Earnhardt’s #0 KSDT CPA / Swenson Advisors Chevrolet skidded into the barrier between them.
Meanwhile, Annett was enjoying his best performance of the year. Closing on the inside line, he hooked up with the #11 Leaf Filter Chevrolet of Justin Haley and surged to the runner-up spot after Chase Briscoe and Noah Gragson tangled for the lead. A last-lap wreck in the middle of the pack caused the caution to fly short of the finish, securing Annett the runner-up spot to Haley. It was a tremendous effort that significantly buoyed his chances of advancing to the next round of the Playoffs following next week’s cut-off race on the Charlotte “Roval.”
Then word broke that one or perhaps two teammates had been disqualified from the race. It was then revealed it was only driver – Annett. His car had failed post-race heights, and was stripped of the runner-up finish, classifying him last and bumping Jeffrey Earnhardt from the Bottom Five. The result dropped Annett to last in the Round of 12, nearly 40 points short of the bubble, all but requiring a win at the “Roval” to advance.

Annett’s disqualification further improved a number of strong runs by other drivers. Ryan Sieg, who scored several stage points in Las Vegas, improved his cushion further by inheriting the runner-up spot in his #39 CMRroofing.com Chevrolet. Josh Williams took 7th after leading the inside line for much of the late stages in his #92 Alloy Employer Services Chevrolet, a new career-best for Williams, and three spots ahead of his DGM Racing teammate Alex Labbe in the #36 Can-Am Chevrolet. Garrett Smithley scored his first top-ten in the series in two years by taking 8th in Bobby Dotter’s fleet #07 Trophy Tractor / Black Draft Chevrolet, building on the team’s many strong runs with Gray Gaulding and Jade Buford. One spot behind him, Brandon Brown took 9th in the #68 Original Larry’s Hard Lemonade Chevrolet, having led four laps on old tires in a bid to improve his own Playoff chances.

Chad Finchum took 11th in the #13 RoofClaim.com Toyota, his new career-best, improving on a 14th at Daytona two years ago, and was joined by 14th-place Timmy Hill in the Top 15, marking a banner day for Motorsports Business Management. Caesar Bacarella tied his own career-best of 13th in the 2018 Daytona opener, driving still another DGM car in the #90 AP Sport Regimen / Mr. Olympia Chevrolet. Mike Harmon Racing also got both their cars into the Top 20 once more, this time with Joe Nemechek in 16th in the #47 Mutt & Jeff Porkskins Chevrolet and Mike Harmon in the #74 Back the Blue Chevrolet. The pair were at one point running five seconds apart, but remained in touch at the finish. And taking 18th was Josh Bilicki, who earned his career-best superspeedway finish in B.J. McLeod’s #99 Gravely Toyota.

LASTCAR STATISTICS
*This was the first time a disqualification classified an XFINITY driver last at Talaldega.
*This marked Annett’s second last-place finish in an XFINITY race at Talladega since April 25, 2010, when his #15 Pilot Travel Centers Toyota wrecked after 20 laps of the Aaron’s 312. That day, he happened to be driving the same car number as Colby Howard, who was unofficially Saturday’s last-place finisher before the disqualification. 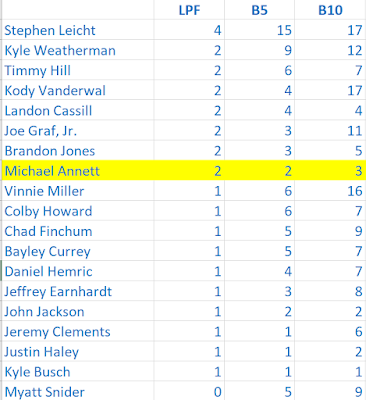