Tim Viens picked up the 1st last-place finish of his NASCAR Gander RV & Outdoors Truck Series career in Sunday’s SpeedyCash.com 400 at the Texas Motor Speedway when his #49 Trump 2020 Chevrolet was involved in a single-truck accident after 29 of 152 laps.
The finish came in Viens’ 14th series start. In the Truck Series’ last-place rankings, it was the 2nd for the #49, the 162nd from a crash, and the 397th for Chevrolet. Across NASCAR’s top three series, it was the 59th for the #49, the 1,232nd from a crash, and the 1,752nd for Chevrolet.
The 44-year-old driver from Vermont has followed an interesting path into NASCAR. In 2015, he made two one-off starts for Mike Harmon Racing – first in Trucks at Dover, finishing 23rd, and then XFINITY at Homestead, taking 33rd. At the time, he’d only been a part-timer in the ARCA Menards Series, where in 2014 he made half the season’s 20 races, but driving for the underfunded Roger Carter and Wayne Peterson teams, finished under power twice and no better than 20th.
While he’s since run another pair of starts for Harmon at Talladega and in the summer race at Daytona, finishing 36th and 18th, Viens’ focus has been on the Truck Series. He carried backing from the Patriots First of America PAC, which has run advertisements for the re-election of President Trump on some of Harmon’s XFINITY cars and nearly all of Viens’ Truck Series entries. Incidentally, this was separate from the Patriots of America PAC, which has put similar “Trump / Pence 2020” logos on both Corey LaJoie and Timmy Hill’s cars in the Cup Series.
This year, Viens and Patriots First had initially signed with Mike Affarano’s #03 team, a single-truck organization which hadn’t successfully qualified for a race since last year at Eldora. This issue would continue to plague the team as they withdrew from the season opener at Daytona, where during the President’s visit, Viens was interviewed in front of Harmon’s PAC-sponsored #47 Chevrolet, which that week was driven by Joe Nemechek. Back at the Affarano team, the #03 was on the wrong side of the cut line when NASCAR cancelled qualifying as part of their COVID-19 protocol, then was withdrawn from a guaranteed spot at Homestead due to multiple issues in technical inspection. Frustrated, Viens parted ways with Affarano effective immediately, taking his backing with him.
Viens then landed at CMI Motorsports, which had withdrawn one of his entries from Homestead. This occurred following the reaction to team owner Ray Ciccarelli’s comments criticizing NASCAR’s recent string of unilateral decisions in response to influences outside the sport, including Anthem protests and the banning of the Confederate battle flag. It was with CMI that Viens was then able to make his first start of the year the next round at Pocono, finishing 29th, then started running the PAC’s “Trump / Pence 2020” graphics package at Kentucky. In August, when the second CMI truck began carrying similar “Back The Blue” logos to Mike Harmon’s #47 team, both trucks and Viens were featured in a rap video by Forgiato Blow and Bryson Gray.
Texas would mark Viens’ ninth start in the “Trump / Pence 2020” paint job, which since Kentucky has switched between both CMI’s #49 and #83. In those nine starts, Viens has failed to finish five times, including Las Vegas, where he was flagged off the track for not maintaining minimum speed. He’s also worked with three different crew chiefs: Tim Silva, Wes Hopkins, and Matt Cooper, who would lead the team at Texas. Viens drew the 33rd starting spot for Sunday’s race.
Rolling off 37th and last was Trey Hutchens, who was making just his third start of the year and first since Michigan, ten races ago. Vytal Studios came on to sponsor his #14 Chevrolet. With no drivers dropping to the rear at the start, Hutchens held last at the start, then by Lap 2 worked his way past Norm Benning in the #6 H&H Transport Chevrolet. Benning, who was 11.12 seconds back of the lead on Lap 3, a second-and-a-half back of the next truck in line, appeared to be the first to lose a lap during the opening laps.
With nine to go in Stage 1, Benning was now two laps down along with Josh Reaume in the #33 Colonial Countertops Toyota, and Viens was now 35th, one lap down. Viens lost his second lap by five to go, but with three to go apparently lost a right-front tire and pounded the outside wall in Turn 3. With Viens stopped on the apron, the first stage ended under caution, and the #49 was out of the race. Ciccarellis finished 22nd.
Hutchens ultimately made it just 36 laps before he fell out with ignition problems, leaving him 36th. Clay Greenfield took 35th after a scary accident in Turns 1 and 2 where his #68 Rackley Roofing Toyota hit the outside barrier, then briefly caught fire as he hit the inside wall. A track bar issue dropped Ryan Truex back to 34th in the #40 Marquis Chevrolet while Tate Fogleman rounded out the Bottom Five, his #02 Solid Rock Carriers Chevrolet crashing out in the caution after Greenfield’s wreck.
LASTCAR STATISTICS
*This marked the first last-place finish for the #49 in a Truck Series race since August 16 of this year, when Roger Reuse’s #49 Belimo / WCIParts.com Chevrolet had clutch issues before the start of the Sunoco 159 at the Daytona Infield Road Course.
THE BOTTOM FIVE
37) #49-Tim Viens / 29 laps / crash
36) #14-Trey Hutchens / 36 laps / ignition
35) #68-Clay Greenfield / 42 laps / crash
34) #40-Ryan Truex / 49 laps / suspension
33) #02-Tate Fogleman / 51 laps / crash
2020 LASTCAR TRUCK SERIES OWNER'S CHAMPIONSHIP
1st) Reaume Brothers Racing (4)
2nd) Niece Motorsports (3)
3rd) CMI Motorsports, DGR-Crosley, Norm Benning Racing, ThorSport Racing (2)
4th) FDNY Racing, Halmar Friesen Racing, Jennifer Jo Cobb Racing, Spencer Davis Motorsports, Young’s Motorsports (1)
2020 LASTCAR TRUCK SERIES MANUFACTURER'S CHAMPIONSHIP
1st) Chevrolet (13)
2nd) Ford (5)
3rd) Toyota (3)
2020 LASTCAR TRUCK SERIES DRIVER'S CHAMPIONSHIP 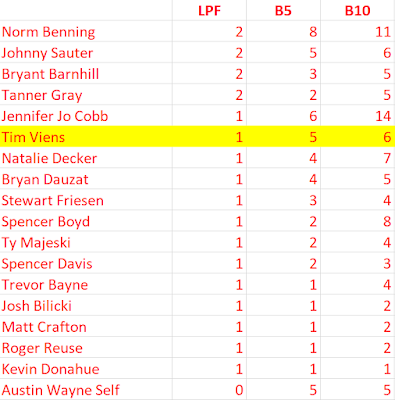