Tanner Gray picked up the 2nd last-place finish of his NASCAR Gander RV & Outdoors Truck Series career in Saturday’s Clean Harbors 200 at the Kansas Speedway when his #15 Ford Performance Ford was collected in a multi-truck accident after 37 of 139 laps.
The finish, which came in Gray’s 23rd series start, was his second of the year and first since Texas, 12 races ago. In the Truck Series’ last-place rankings, it was the 6th for the #15, the 110th for Ford, and the 161st from a crash. Across NASCAR’s top three series, it was the 43rd for the #15, the 968th for Ford, and the 1,230th for a crash.
With three races to go, Gray joins an even tighter battle for the 2020 LASTCAR Truck Series Championship, joining Bryant Barnhill, Johnny Sauter, and Norm Benning in a tie for the most last-place finishes this year. Benning leads Sauter in the bottom-five tiebreaker, 8-5.
Since he was last featured here, Gray has become the strongest non-Playoff driver in the Truck Series, finishing a career-best 3rd at Michigan, Bristol, and Las Vegas. Curiously, the streak began at Kansas, where in July 25th’s second round of a weekend double-header he took home 4th, his first career Top Five. The Bristol and Vegas runs were two of the series’ most recent three rounds heading into Saturday, followed by a wreck at Talladega that left him 29th. The wreck cost him one spot in points, from 12th to 13th. Gray would rolled off 19th in Saturday’s race.
Starting 36th and last was Ray Ciccarelli, who brought back his #83 CMI Motorsports Chevrolet that had been withdrawn in the most recent round at Talladega. When the race started, he was 3.837 seconds back of the lead, but no longer in last place. At least three others had dropped to the rear: 21st-place Ryan Truex in the #40 Marquis Chevrolet (4.329 seconds back at the start), 33rd-place Dawson Cram in the #41 Chevrolet (4.504 seconds), 34th-place Hailie Deegan, making her series debut in the #17 Ford as Gray’s teammate (4.094 seconds). Norm Benning had also surrendered 26th in his #6 H&H Transport Chevrolet and was just ahead of Ciccarelli for the restart, 3.724 seconds back of the lead.
When the first lap was complete, Cram took over last place, 6.949 seconds back, with Ciccarelli up to 32nd. By Lap 3, Cram passed Ciccarelli’s teammate Tim Viens in the #49 CMI Motorsports Chevrolet, which became the first truck to lose a lap around the 16th circuit. Struggling with a tight condition off Turns 2 and 4, Viens was three down by Lap 25. He also complained that the throttle was sticking.
Next to enter the last-place battle was Jordan Anderson, who this week ran red door numbers on his #3 Bommarito.com Chevrolet. After rolling off 15th, Anderson dropped to 32nd by Lap 16, when he too lost a lap. Radio communications indicated several issues, including a piece of debris on the grille and a track bar issue. The truck had jumped loose under green, feeling like it had “1500 springs in the rear” according to the driver. “It’s gonna be one of those days,” said someone on his radio. After a stop on Lap 33, Anderson was three laps down and took last place from Viens. He pitted a second time, and the crew looked under the hood. The truck lost electrical power, showing 12 volts on the battery, and couldn’t re-fire on pit road. Citing a starter issue, Anderson waited for a tow truck to push him to the garage when trouble broke out on the track.
On Lap 38, Talladega winner Raphael Lessard broke loose on the inside line of a tight Turn 4 battle, then pinned title contender Tyler Ankrum’s #26 Liuna Chevrolet into the outside wall. As Ankrum skated down the track with flames trailing his machine, Parker Kligerman was collected in the #75 Food Country USA Chevrolet. Further back, Tanner Gray was slowing in the outside lane when David Gravel broke loose in front of him in the #24 ChevyGoods.com Chevrolet. Gravel snapped to the right, pinning Gray into the outside wall. Still another wreck nearly unfolded behind the two as Deegan clipped Cram, leading to Colin Garrett’s nose damage to the #44 The Rosie Network Chevrolet as he rear-ended Clay Greenfield’s #68 Rackley Roofing Toyota. Kligerman recovered to finish a strong 15th.
The wreck resulted in a red flag, and crash damage eliminated Gray, Gravel, Ankrum, and Lessard. Gray, the lowest-classified of the four, dropped to 35th when the race restarted. Anderson, eight laps down when the wreck unfolded, returned to action soon after the restart, dropping Gray to last around four laps later. Gravel, Ankrum, and Lessard took the next three spots in the Bottom Five, which was completed by Viens. After running last before the accident, Anderson climbed to finish 30th.
Making his first Truck Series start since October 12, 2019 at Talladega, Timothy Peters took the checkered flag in 7th, turning in a strong run in his unexpected relief driver role after Stewart Friesen’s scheduling conflict. Peters’ performance in the #52 Halmar “Racing To Beat Hunger” Toyota was his best finish in the series since the 2019 Daytona opener, when he also ran 7th for Niece Motorsports.
LASTCAR STATISTICS
*This marked the first last-place finish for the #15 in a Truck Series race at Kansas.
THE BOTTOM FIVE
36) #15-Tanner Gray / 37 laps / crash
35) #24-David Gravel / 37 laps / crash
34) #26-Tyler Ankrum / 38 laps / crash
33) #4-Raphael Lessard / 39 laps / crash
32) #49-Tim Viens / 91 laps / fuel pump
2020 LASTCAR TRUCK SERIES OWNER'S CHAMPIONSHIP
1st) Reaume Brothers Racing (4)
2nd) Niece Motorsports (3)
3rd) DGR-Crosley, Norm Benning Racing, ThorSport Racing (2)
4th) CMI Motorsports, FDNY Racing, Halmar Friesen Racing, Jennifer Jo Cobb Racing, Spencer Davis Motorsports, Young’s Motorsports (1)
2020 LASTCAR TRUCK SERIES MANUFACTURER'S CHAMPIONSHIP
1st) Chevrolet (12)
2nd) Ford (5)
3rd) Toyota (3)
2020 LASTCAR TRUCK SERIES DRIVER'S CHAMPIONSHIP 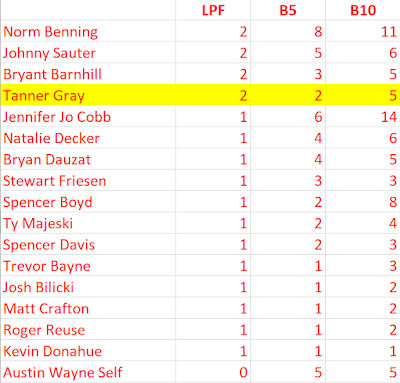