Just under a year ago, Boyd pulled off a controversial upset at the same Talladega track. Running third off the final corner as race leader Johnny Sauter forced Riley Herbst below the yellow line, then went below the line himself, Boyd edged Herbst for second. But NASCAR penalized Sauter for the move, handing Boyd the victory – the first not only for Missouri driver, but the first for Young’s Motorsports, which had been fielding Truck Series entries since 2012. Alabama Roofing Professionals, which jumped on board just in time to have their logo roll into Victory Lane, would again back Boyd for the 2020 running, along with Crowe Equipment, Inc.

Boyd would start 24th in Saturday’s race, where he looked to turn around a rather difficult season. He entered the event just 19th in the standings with no finishes better than the 17th he took at, of all places, the Daytona infield road course. That race also marked one of only five times in 18 races that his #20 finished on the lead lap.

Starting 38th and last on Saturday was Bryan Dauzat, who carried a number of small associate sponsors on the side of Jim Rosenblum’s #28 Chevrolet, including new backing from Peter Navarra Landscape. It was Dauzat’s first series start since a terrible Kansas weekend where he finished 37th in both races. Following the events about to occur, he would cross the stripe in 21st, one lap down, his best finish since the same 2019 running that Boyd had won, where he took 17th. Dauzat was joined in the back by Kaz Grala, who just as during the Cup race on the infield road course was serving as a relief driver. This time, he drove the #44 Remarkable Pillow Chevrolet in place of Natalie Decker, whose truck was classified last in Las Vegas after Decker wasn’t medically cleared to compete.

When the race started, Dauzat appeared to be in last off Turn 2, but Grala had lost the draft by Lap 3, dropping him a full 26 seconds back of the lead. By Lap 7, he was 38.78 seconds back, and it was only a matter of time before the leaders put him a lap down. Moments later, he’d move past Grant Enfinger, who made an unscheduled stop after a left-rear tire went down entering the tri-oval, costing the #98 Champion / Curb Records Ford at least a lap. Enfinger had barely returned to the track when trouble broke out in the lead pack.

On Lap 13, heading into Turn 3, race leader Sheldon Creed made an aggressive block on Austin Hill. Creed somehow managed to regain control and merge back in front of Hill on the inside line, but the resulting chain-reaction caused GMS Racing teammates Zane Smith and Chase Purdy to collide around 11th place. Nine more trucks piled in, including Dawson Cram, who had driven one of Jordan Anderson’s Chevrolets as his #41 Magnum Contracting Chevorlet. Cram skidded up the track and bounced off the wall, then slid directly into the path of Joe Nemechek’s #8 Breast Cancer Awareness Chevrolet. Boyd, trying to follow Nemechek through on the inside, collided with the #8, and he stopped on the apron of Turn 4 as Nemechek rolled back onto pit road. This put Boyd behind Nemechek, which proved significant as the two occupied the final two spots.

Cram took 35th, one spot ahead of Korbin Forrister, who was making his first-ever start with DGR-Crosley, the team that acquired his Owner Points with All Out Motorsports. While listed as a Ford, consistent with DGR-Crosley’s manufacturer partnership, Forrister’s #17 Supreme Attrax machine appeared to be one of All Out’s gray Toyotas with the Toyota crest blacked out on the grille. Rounding out the group was Danny Bohn, also eliminated in the wreck after his #30 North American Motor Car / Sierra Delta Toyota ended up in the infield grass.

Jordan Anderson and Codie Rohrbaugh, who finished a strong 2nd and 3rd in this year’s Daytona opener, impressed again by finishing 6th and 5th, respectively in the #3 Bommarito.com / Rusty’s Off Road Chevrolet and #9 Grant County Mulch Chevrolet. Anderson’s run came just days after his Daytona-winning truck was released by Lionel for their latest wave of 1:64 scale diecast.

Kaz Grala finished 9th, once again impressing in his role as a relief driver, but one of his teammates at Niece Motorsports performed even better. Trevor Bayne, who just weeks ago was disqualified at Bristol, nearly pulled off the victory only for his #45 Plan B Sales Chevrolet to be edged by first-time winner Raphael Lessard when a caution froze the field on the final lap.

Also surviving the chaos was Norm Benning, whose #6 H&H Transport Chevrolet took 22nd at the checkered flag, improving on his season-best 25th in Kansas.

LASTCAR STATISTICS
*Boyd has now scored a last-place finish in all three of NASCAR’s top series at Talladega – each in consecutive years. His XFINITY finish came there on April 28, 2018, and he finished last in Cup on October 14, 2019 driving for Rick Ware Racing, two days after his win in the Truck Series race. 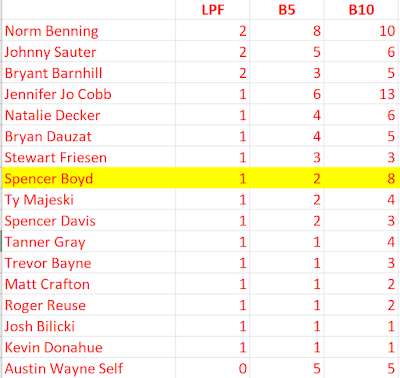