Matt Kenseth picked up the 5th last-place finish of his NASCAR Cup Series career in Sunday’s Hollywood Casino 400 at the Kansas Speedway when his #42 Advent Health Chevrolet fell out with crash damage after 144 of 267 laps.
The finish, which came in Kenseth’s 694th series start, was his second of the season and first since June 22, 2020 at Talladega, 20 races ago. In the Cup Series’ last-place rankings, it was the 27th for the #42, the 606th from a crash, and the 796th for Chevrolet. Across NASCAR’s top three series, it was the 39th for the #42, the 1,231st from a crash, and the 1,751st for Chevrolet.
Since his most recent feature on this site, Kenseth has continued to struggle with a lack of practice and qualifying, often finishing between 15th and 20th with a handful of worse finishes. The lone bright spot came in what turned out to be the final Brickyard 400 at Indianapolis, a race he’d never won in his 22-year career. For the final restart, Kenseth worked his way to 2nd, but advanced no further on race leader Kevin Harvick, and the McDonald’s sponsorship has still yet to reach victory lane since 1994. Then on September 21 came news that Ross Chastain would drive the #42 in 2021, and Kenseth has all but confirmed he will not return to Cup after this season.
Kenseth started 30th at Kansas, in part due to a frustrating afternoon on the “Roval” where he struck a tire barrier head-on, leaving him 34th. He would run sponsorship from Advent Health, which most recently sponsored Chastain at both the Daytona 500 and the Coca-Cola 600, running in partnership with Ganassi at Spire Motorsports.
Starting 40th and last on Sunday was Chad Finchum, who for the first time since Las Vegas drove Motorsports Business Management’s #49 Sharelife / LasVegas.net Toyota, still carrying Timmy Hill’s “throwback” scheme from Darlington. He was joined at the rear by two drivers who each twice failed pre-race inspection – 5th-place Martin Truex, Jr. in the #19 Bass Pro Shops / Tracker Boats Toyota and 33rd-place James Davison in the #53 America’s Best Value Inn  / Tilson Ford.
When the race started, Davison was last across the stripe, 4.455 seconds back of the lead, but caught and passed Finchum by Lap 3. By the seventh circuit, Davison passed his teammate Joey Gase in the #51 Page Construction Ford, and both Gase and Finchum started to lose touch with the tail end of the pack. On Lap 15, Finchum’s team told him to stay high as the leaders caught him and made his #49 the first car one lap down by Lap 16. When the competition caution fell on Lap 27, Finchum was still last, but pit stops swapped the spot between Timmy Hill’s #66 CrashClaimsR.us Toyota on Lap 28 and Josh Bilicki’s #7 Insurance King Chevrolet on Lap 29. Bilicki took the spot after a pit road penalty that dropped him to tail end of the longest line.
On Lap 32, Bilicki dropped Finchum back to last, who gradually lost more laps through the remainder of Stage 1. He was three down on Lap 49, five down by Lap 72, and eight down by Lap 78. There was also at least one close call on Lap 76 as Brad Keselowski caught him entering Turns 1 and 2, squeezing between Finchum and the outside wall. On Lap 97, Finchum reported he had a problem in the rear of the car, but didn’t pit as he believed it was rear tire chatter. The vibration then returned on Lap 110, again in the rear of the car.
Meanwhile, Gase made a four-tire stop and took last from Finchum on Lap 124, shown 11 laps down to Finchum’s 10. The two then began racing each other, running nose-to-tail on Lap 130. On Lap 142, Gase slowed with a loss of fuel pressure, and crept onto pit road under green. The team decided to “just put fuel in it” when, moments later, the caution fell for a wreck on the frontstretch.
While not a factor for the lead, Kenseth was battling Erik Jones’ #20 Resers Toyota for 27th, running the low lane to complete the pass. When coming up the track, Kenseth wasn’t quite clear and hooked cross Jones’ nose, putting both cars into the wall. Both drivers made it to pit road with Kenseth’s team trying to address an issue with the track bar. Meanwhile, on Lap 146, Gase was told to turn into the garage “by the yellow canopy” to address a possible fuel leak, the driver told to stay in the car with the window net up. The next time by on Lap 147, Kenseth pulled behind the wall, out under the “Damaged Vehicle Policy.”
On Lap 166, Gase returned to the track 33 laps down and ten laps behind Kenseth. During the stay in the garage, the team also addressed a radio issue where they couldn’t hear the driver over static. On Lap 167, Kenseth was declared officially out by NASCAR due to an accident, not the DVP as in Noah Gragson’s finish the day before. Finchum pulled behind the wall shortly after, and NASCAR declared the #49 out with transmission issues on Lap 175. Gase then dropped Kenseth to last on Lap 180.
Gase climbed to 37th at the finish, the last car under power, dropping Finchum to 39th and Kurt Busch, whose #1 Monster Energy Chevrolet blew an engine while battling among the leaders, dropped to 38th. Rounding out the Bottom Five was Reed Sorenson in Spire Motorsports’ #77 Marwin Sports Chevrolet, 17 laps down to the leaders.
LASTCAR STATISTICS
*This marked the first last-place finish for the #42 in a Cup Series race at Kansas.
THE BOTTOM FIVE
40) #42-Matt Kenseth / 144 laps / crash
39) #49-Chad Finchum / 154 laps / transmission
38) #1-Kurt Busch / 197 laps / engine
37) #51-Joey Gase / 228 laps / running
36) #77-Reed Sorenson / 250 laps / running
2020 LASTCAR CUP SERIES OWNER'S CHAMPIONSHIP
1st) JTG-Daugherty Racing (7)
2nd) Motorsports Business Management (6)
3rd) Rick Ware Racing (5)
4th) Chip Ganassi Racing (3)
5th) Hendrick Motorsports, Leavine Family Racing, Penske Racing (2)
6th) Beard Motorsports, B.J. McLeod Motorsports, Front Row Motorsports, Joe Gibbs Racing, StarCom Racing, Tommy Baldwin Racing (1)
2020 LASTCAR CUP SERIES MANUFACTURER'S CHAMPIONSHIP
1st) Chevrolet (20)
2nd) Toyota (9)
3rd) Ford (4)
2020 LASTCAR CUP SERIES DRIVER'S CHAMPIONSHIP 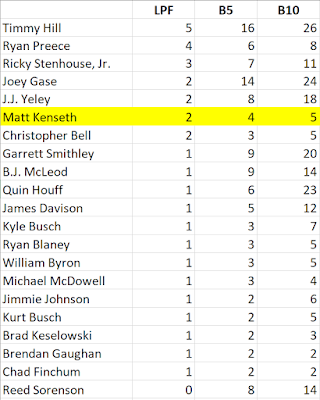