Wayne Peterson finished last for the 47th time in his ARCA Menards Series career in Saturday’s Illinois Truck and Equipment Allen Crowe 100 at the Illinois State Fairgrounds Racetrack when his #0 GreatRailing.com Chevrolet did not start the race.

The finish was Peterson’s first since Winchester, two races ago. The finish came in Peterson’s 115th series start.

The initial entry list for the only dirt race of 2020 released with eighteen cars. Traditional dirt ringers Ryan Unzicker and Kelly Kovski were on the list, as well as a four-car team for Fast Track Racing featuring Alex Clubb in the #01, Mike Basham in the #10, Tim Monroe in the #11 and Owen Smith in the #12. Eric Caudell and Will Kimmel returned as part of their limited schedules, and Corey Heim filled out the Venturini Motorsports lineup in the #20 car.

Clubb’s entry withdrew before on-track activity began, leaving seventeen cars in the field. Fifteen cars took a time in the half-hour practice, of those that did, Peterson was the slowest, clocking in at just over 66 seconds on what was likely a lap just to make sure there were no mechanical gremlins in the car. In qualifying, Peterson was the only driver that did not take a time. Eric Caudell was sixteenth-fastest; his lap of 42 seconds was about eight seconds off of Unzicker’s pace.

Peterson’s car was on the grid for driver introductions but the 82-year-old’s machine was not included in any of the pace lap television shots. He was later listed as a “did not start” by Racing-Reference.

Caudell pulled off after six laps, followed by Owen Smith two laps later. Will Kimmel retired with damage just shy of the quarter-race mark, and Brad Smith parked with clutch issues after thirty laps, rounding out the Bottom Five. 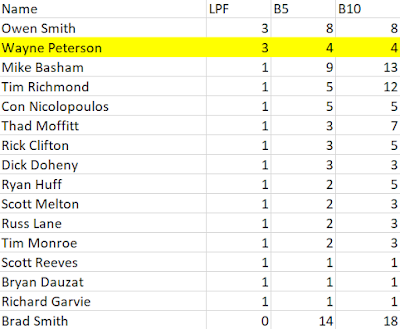 can we get a f