by William Soquet
LASTCAR.info Guest Contributor
Alex Clubb finished last for the second time in his ARCA Menards Series career in Saturday’s Speediatrics 150 at Kansas Speedway when his #01 A. Clubb Lawn Care & Landscaping Ford fell out with a vibration after completing only 1 of the race’s 100 laps.
The finish came in Clubb’s 11th series start, and was his first since Elko last year, 27 races ago.
After Clubb’s 2019 season came to a premature end at Elko, the landscaper and city council member out of Morris, Illinois set his sights on 2020. While he did not enter any races until Kansas, there was a good reason for that: Clubb and his wife welcomed their first child over the summer. He tried to get a car ready for the race at Springfield, but family time and work obligations prevented him from running the event. He did finish his car for the Kansas event, and entered it with the number 01, using owner points borrowed from Andy Hillenburg at Fast Track Racing.
Clubb was not the only entry borrowing owner points from a different team at Kansas. Almost a quarter of the field - 4 of 18 entries - used owner points from a different team. The eventual race-winning car of Corey Heim was prepared in the Venturini Motorsports shop but used Fast Track Racing owner points, presumably for a better starting position. Kris Wright’s Chad Bryant Racing entry was also using owner points from Fast Track. Mike Basham’s entry from Fast Track was using owner points from Chad Bryant in a de facto swap. Derek Griffith finished out a sporadic part-time stint in CBR’s bright yellow #22 car. Other part-timers entered included Scott Melton, returning to his familiar #69, Dylan Lupton, driving a one-off ARCA race for DGR-Crosley, and Eric Caudell, who finished the season running four consecutive races in his #7 car. Owen Smith rounded out Fast Track’s stable, and based on the entry list, he looked poised to claim the LASTCAR drivers’ championship. Wayne Peterson Racing entered Tim Richmond in the #06 and Con Nicolopoulos in the #0, leaving the team patriarch off the entry list.
Only sixteen of the nineteen cars took time in practice. Eventual series champion Bret Holmes led the series with a lap of just over 30.7 seconds. Richmond trailed the field, running a best lap of 38.4 seconds. Qualifying was not held, and the lineup was set by owner points. As it was the CBR 77’s first attempt since Daytona, Basham started shotgun on the field.
Early in the race, ARCA timing and scoring listed Clubb out after one lap and Nicolopoulos out after two, all but clinching the LASTCAR championship for Owen Smith. However, during the middle portions of the race, reports emerged that Nicolopoulos was watching the race from his home in Michigan while being scored as the driver of the 0 car. Multiple sources from the garage later confirmed that Wayne Peterson had stepped into the 0 car for the race, setting off a retroactive nailbiter for the LASTCAR championship. If Peterson had pulled off at the initial green flag, as he did at Springfield two weeks ago, he would have claimed his fourth last-place finish of the year and his third consecutive LASRCAR championship. However, Peterson ran exactly two laps in all of his paved-track starts this year, and that was one too many in the LASTCAR championship battle. Clubb’s retirement after one lap prevented Peterson from claiming a would-be series-high fourth last-place finish on the year. While Peterson and Owen Smith both finished last three times in the 2020 season, Smith has a tiebreaker edge on Bottom Five finishes, 9 to 5, handing him the 2020 LASTCAR ARCA Menards Series drivers championship.
Smith, ironically, was the next car to fall out, citing brake issues. Brad Smith’s full-season effort ended a little early due to engine problems that sidelined the team after 36 laps completed. All other cars finished the race, and Ty Gibbs, who battled a number of issues throughout the night, came home 14th, 40 laps down.
The weekend took a terrible turn after the race. On Sunday morning, news broke that most of the Wayne Peterson Racing team equipment from the 06 car was stolen from a hotel outside the track: 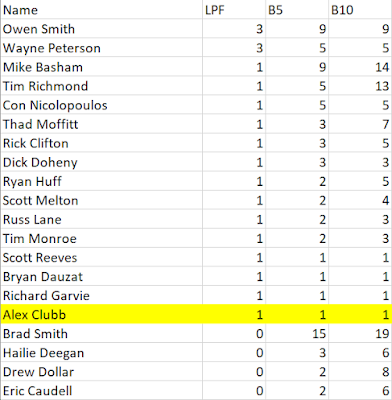