Timmy Hill picked up the 4th last-place finish of his NASCAR XFINITY Series career in Saturday’s Virginia Is For Racing Lovers 250 at the Richmond Raceway when his #66 CrashClaimsR.us Toyota fell out with fuel pump issues after 56 of 250 laps.
The finish, which came in Hill’s 206th series start, was his second of the season and first since August 22, the opening round of the Dover double-header, five races ago. In the XFINITY Series’ last-place rankings, it was the 5th from a fuel pump issue, the 12th for the #66, and the 142nd for Toyota. Across NASCAR’s top three series, it was the 30th from a fuel pump, the 76th for the #66, and the 344th for Toyota.
It has continued to be the best of times and worst of times for the popular underdog from Maryland. Since his most recent last-place run in the XFINITY Series, he steered a Joe Gibbs Racing engine into the lead pack at Daytona, only to drop from contention after a tire went down under green. Mechanical gremlins have continued to plague his Cup effort with Motorsports Business Management, including an engine failure at Dover and overheating issues just last week in Darlington. But it’s been his Truck Series effort that has turned some of the strongest runs of the year. After a 9th-place finish at Darlington, running a paint scheme honoring he and brother Tyler’s father Jerry Hill, he finished 9th once more to start the Richmond weekend on Thursday.
For the XFINITY double-header at Richmond, Hill would drive MBM’s #66 Toyota, a team that has most often been on “start-and-park” duty in 2020. Hill, along with teammates Chad Finchum and Stephen Leicht, have combined to finish just two races this year under power in the #66 – the season-opener in Daytona and the Indianapolis road course.
On Friday night, Hill appeared to have his second last-place finish in four races when he pulled off the track in the early laps, but Finchum inherited the spot after failing post-race inspection. Despite the change, the matrix still placed Finchum’s #61 in 33rd ahead of both Leicht’s #13 and Hill’s #66, as well as Vinnie Miller in the #99 Koolbox Chevrolet. Hill would thus roll off 36th and last, a field reduced by one as Kyle Busch was not entered. Finchum would end up joining Hill at the tail end, however, as he incurred a pre-race penalty for changing engines. Myatt Snider would also surrender 27th after a crash sent him to a backup #93 Superior Essex Chevrolet.
In the race itself, Hill lost a lap by the 30th circuit, but by Lap 43 climbed past Snider’s backup car into 35th place. He only stayed in the race just past the competition caution before pulling behind the wall. Incidentally, NASCAR.com's online leaderboard showed Hill a total of 5,728.810 seconds behind the leader when the checkered flag dropped.
Colby Howard, whose #15 Project Hope Foundation Chevrolet stopped in Turn 4 the night before, slowed there again on Saturday after hitting the wall. This put him out of the race, and he eventually dropped to 35th. Riley Herbst took 34th after his #18 Monster Energy Toyota crossed the nose of Brandon Brown entering Turn 1, leaving him with significant damage to the right-rear. These three were the day’s only DNFs. Rounding out the Bottom Five were Jesse Little, six laps down in the #4 JD Motorsports Chevrolet, and one lap behind Vinnie Miller’s #99.
The same B.J. McLeod Motorsports team that fielded Miller’s 32nd-place finisher also enjoyed a strong weekend with teammate Matt Mills. Mills finished 13th on Friday, took 3rd on the grid for Saturday, and finished 13th once again, achieving some well-earned television time with Jeff Burton giving him encouragement. These two runs are now tied for Mills’ second-best ever XFINITY Series finishes, trailing only his 10th-place run on the Daytona oval last month.
LASTCAR STATISTICS
*This marked the third consecutive last-place finish for Motorsports Business Management in an XFINITY race at Richmond, dating back to September 20, 2019 with Mike Marlar.
*This was the first XFINITY Series last-place finish by reason of a “fuel pump” since November 4, 2017, when John Jackson's #13 Dodge (also fielded by MBM) fell out after 7 laps of the O’Reilly Auto Parts Challenge at Texas.
THE BOTTOM FIVE
36) #66-Timmy Hill / 56 laps / fuel pump
35) #15-Colby Howard / 140 laps / crash
34) #18-Riley Herbst / 227 laps / crash
33) #4-Jesse Little / 244 laps / running
32) #99-Vinnie Miller / 245 laps / running
2020 LASTCAR XFINITY SERIES OWNER'S CHAMPIONSHIP
1st) Motorsports Business Management (7)
2nd) Joe Gibbs Racing (3)
3rd) JD Motorsports, Jimmy Means Racing, JR Motorsports, Mike Harmon Racing, Shepherd Racing Ventures, SS-Green Light Racing (2)
4th) B.J. McLeod Motorsports, Jeremy Clements Racing, Kaulig Racing (1)
2020 LASTCAR XFINITY SERIES MANUFACTURER'S CHAMPIONSHIP
1st) Chevrolet (15)
2nd) Toyota (10)
2020 LASTCAR XFINITY SERIES DRIVER'S CHAMPIONSHIP 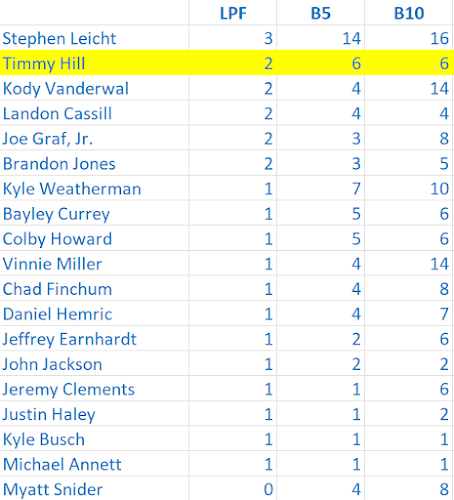