Daniel Hemric picked up the 1st last-place finish of his NASCAR XFINITY Series career in Saturday’s Sport Clips Haircuts VFW 200 at the Darlington Raceway when his #8 Poppy Bank / John Andretti Tribute Chevrolet was involved in a multi-car accident after 2 of 147 laps.
The finish came in Hemric’s 82nd series start. In the XFINITY Series, it was the 14th for the #8, the 336th from a crash, and the 555th for Chevrolet. Across NASCAR’s top three series, it was the 49th for the #8, the 1,223rd from a crash, and the 1,739th for Chevrolet.
Hemric’s XFINITY Series career has been defined by his frustrating search for his first series victory. Despite making the Championship Four at Homestead in 2018 on remarkable consistency, he’s finished runner-up six times, most recently this past May in Charlotte. He then earned a full-season ride in the Cup Series just last year, piloting Richard Childress Racing’s #8 Chevrolet. He pulled ahead of Ryan Preece in the final months of the Rookie of the Year battle, but still lost his ride to Tyler Reddick.
Darlington would mark Hemric’s 16th XFINITY Series start in 23 races this year, now as a part-time driver sharing the #8 with Jeb Burton and Dale Earnhardt, Jr. The aforementioned Charlotte race remains his season-best finish, but when Hemric hasn’t finished inside the Top Ten, he’s had terrible luck. Suspension failure left him 35th in Las Vegas, then a crashes put him 30th at Phoenix, 31st at Homestead, and 28th at Pocono. The road course stretch was particularly brutal as the engine let go after seven laps at Road America, leaving him 35th, followed by an early crash on the Daytona infield, worth 37th. Just last week on the Daytona oval, he was again on the wrong side of the night’s chaos, taking 24th, and dropping his average finish to 18.9.
Darlington’s “Throwback Weekend” was a welcome distraction. On August 4, JR Motorsports revealed that Hemric would run a particularly special throwback scheme, honoring the life of John Andretti, who passed away on January 30. In conjunction with the #CheckIt4Andretti cancer screening initiative, Hemric’s car would resemble the purple-and-orange Michael Kranefuss-owned #37 Ford that Andretti ran in 1995 and 1996. It was in the ’95 season that Andretti won the pole for the Southern 500, led 41 laps, and finished 12th. The same race the following year turned out to be his last with the team, where he again ran strong with a 5th-place finish. He then moved to Cale Yarborough Motorsports, with whom he’d score his first Cup win at Daytona in 1997.
In place of Andretti’s K-Mart and Little Caesar’s sponsorship, Hemric’s part-time XFINITY backer Poppy Bank would stay on board. Hemric drew the 15th starting spot.
Starting 37th and last was defending last-placer Denny Hamlin, who won the 2019 race in a backup car, only to be classified last due to being too low in the left-front and too high in the right-rear. This year’s throwback was to Cale Yarborough, and would be with the same #54 Joe Gibbs Racing team that finished a close second with Kyle Busch when the series ran this past May.
No drivers were sent to the back for the start, though according to Bob Pockrass, 15th-place Josh Williams failed pre-race inspection twice, incurring him a loss of pit selection penalty next week in Richmond. At least two teams dropped to the rear voluntarily: 35th-place Dexter Bean in Mario Gosselin’s #90 Alloy / Sleep Well Chevrolet and 36th-place Stephen Leicht in the #66 Jani-King Toyota. While Bean wasn’t running a “throwback” scheme, Leicht’s Toyota Camry was repainted to resemble Carl Long’s Dodge he ran for Mansion Motorsports in 2001 and 2002.
When the race started, Leicht took over the last spot, and was 8.688 seconds back of the lead at the end of Lap 1. He was barely a tenth behind Bean, who had dropped a full 1.586 seconds back of the next car in line. The two were still running at the back of the pack when trouble broke out on Lap 2. Coming off the second corner, Hemric was on the outside of Anthony Alfredo in the #21 Blue Otter Polarized Chevrolet, which was also working under Justin Allgaier’s #7 Brandt Chevrolet. Just past corner exit, Alfredo appeared to break loose, tipping Allgaier in the left-rear, and pinching Hemric into the outside wall. Hemric then came across the nose of Ryan Sieg’s #39 CMRroofing.com Chevrolet and both spun into the inside wall. While Sieg briefly took last place under the ensuing caution, he recovered to actually lead nine laps and finish 3rd. But Hemric pulled behind the wall, done for the afternoon.

What an amazing day for the #39 CMR Construction & Roofing Chevrolet. We got involved in a wreck on lap 2 but the team never quit and came back up thru the field with a beat up race car and finished 3rd. Very proud of the entire @RSS383993 team and looking forward to Richmond. pic.twitter.com/dzfN4lNMUR 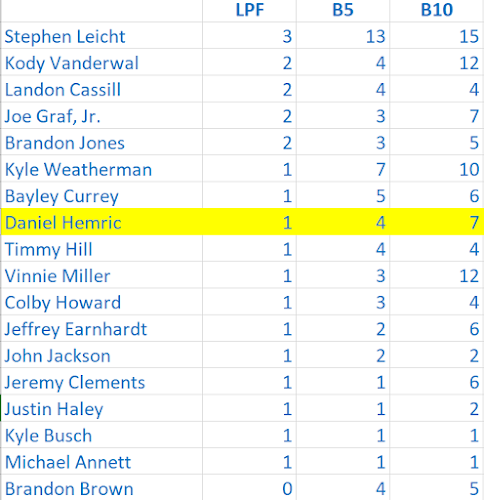