Chad Finchum picked up the 2nd last-place finish of his NASCAR XFINITY Series career in Friday’s Go Bowling 250 at the Richmond Raceway when his #61 Smithbilt Homes Toyota finished 27th, but was disqualified after completing 246 of 250 laps.

The finish, which came in Finchum’s 93rd series start, was his first of the season and first since May 25, 2019 at Charlotte, 46 races ago. In the XFINITY Series’ last-place rankings, it was the 12th disqualification, the 17th for the #29, and the 141st for Toyota. Across NASCAR’s top three series, it was the 29th for the #61, the 38th from disqualification, and the 343rd for Toyota.
Timmy Hill picked up the 4th last-place finish of his NASCAR XFINITY Series career in Friday’s Go Bowling 250 at the Richmond Raceway when his #66 CrashClaimsR.us Toyota fell out with a vibration after 4 of 250 laps.
The finish, which came in Hill’s 205th series start, was his second of the season and first since August 22, the opening round of the Dover double-header, four races ago (LINK). In the XFINITY Series’ last-place rankings, it was the 12th for the #66, the 141st from a vibration, and the 141st for Toyota. Across NASCAR’s top three series, it was the 76th for the #55, the 215th from a vibration, and the 343rd for Toyota.
Late last year, Finchum scored a surprising 15th-place finish at Texas, which still stands as the best finish by Carl Long’s underdog XFINITY team Motorsports Business Management (MBM) on a mile-and-a-half oval. While he missed the cut for this year’s Daytona 500, he’s quietly become perhaps the most consistent driver on MBM this season. He began the year with seven-straight finishes inside the Top 25, lifting him as high as 19th in the point standings, then earned a season-best 16th in the first round of the Kentucky double-header.
Then, just last week, Finchum campaigned one of the most head-turning “throwback” schemes at Darlington. Honoring both Jerry Nadeau and the now-defunct Elliott-Marino Motorsports, Finchum’s #13 Camry was decorated like the FirstPlus Financial Ford Taurus from the 1998 Winston Cup season. In the race, Finchum battled for the Lucky Dog all the way to the finish, taking 20th at the checkered flag. It was the best finish ever for the scheme at Darlington – when it last ran in ’98, Nadeau finished 31st in the spring race while Dennis Setzer ran 29th in the Southern 500.
For Richmond, The MBM team swapped car numbers for all three of their drivers, giving Finchum the #61 number that’s been shared with Hattori Racing Enterprises and driver Austin Hill. In place of the Hattori-backed Supra, Finchum would drive MBM’s bright yellow Toyota Camry, a car which in past years has run several road course races.
Timmy Hill, one of Finchum’s teammates at MBM, drew the 37th and final starting spot. In place of the blue-and-gold Carl Long “throwback” scheme Stephen Leicht ran last week in Darlington, Hill would run the white-and-gold scheme the team ran earlier this season. Leicht moved to the #13, which still carried Hill’s sponsorship from RoofClaim.com. Prior to the green flag, Hill would be joined by two teams due to pre-race penalties – Matt Mills from 22nd for unapproved adjustments on his #5 J.F. Electric Chevrolet and Joey Gase, who was swapped in for 31st-place J.J. Yeley in SS-Green Light Racing’s #07 Donate Life Virginia Chevrolet.
When the race started, Hill dropped behind both Mills and Gase, retaining the 37th starting spot for the green flag. On the break, Hill was 5.08 seconds back of the lead, and by Lap 3 had dropped a full 1.523 seconds back of 36th-place Kyle Weatherman in the #47 Honor and Sacrifice Chevrolet. By Lap 5, the team was counting Hill down to his pit stall, then was instructed to pull into the garage. The radio went silent at that point, and NASCAR didn’t report the #66 was behind the wall until Lap 10. NASCAR reported Hill out of the race on Lap 32.
Overall, it had been a rough evening for the MBM trio. Stephen Leicht dropped out with an axle issue after 88 laps, and his car chief was ejected, unable to participate in the second round of the double-header. Leicht took 35th in the unofficial results, one spot ahead of Myatt Snider, whose #93 Superior Essex Chevrolet was turned into the inside wall on the backstretch following the Lap 42 competition caution. Rounding out the Bottom Five were Colby Howard, who stalled on the track on Lap 15 and lost 27 laps in the garage before he returned to action during the competition yellow. Jeb Burton also suffered mechanical issues on his #8 State Water Heaters Chevrolet, nixing a strong top-ten run at his home track, but also managed to finish under power in 33rd.
Finchum easily earned the best finishing position of the MBM trio, taking the 27th spot, four laps down. That changed around 10:26 P.M. local time, when it was revealed Finchum’s car had failed the rear heights phase during post-race inspection. The result dropped Finchum to last place, putting all three MBM cars in the Bottom Five, and bumping Jeb Burton out of the group. Finchum will likewise start last on Saturday for the second round of the double-header.
LASTCAR STATISTICS
*This marked the first last-place finish for the #61 in an XFINITY Series race since June 30, 2018, when Kaz Grala and Fury Race Cars, LLC got their only last-place finish together at Chicagoland following electrical issues on his #61 Kiklos / IT Coalition Ford after just 1 lap of the Overton’s 300.
THE BOTTOM FIVE
37) #61-Chad Finchum / 246 laps / disqualified
36) #66-Timmy Hill / 4 laps / vibration
35) #93-Myatt Snider / 46 laps / crash
34) #13-Stephen Leicht / 88 laps / axle
33) #15-Colby Howard / 220 laps / running
2020 LASTCAR XFINITY SERIES OWNER'S CHAMPIONSHIP
1st) Motorsports Business Management (6)
2nd) Joe Gibbs Racing (3)
3rd) JD Motorsports, Jimmy Means Racing, JR Motorsports, Mike Harmon Racing, Shepherd Racing Ventures, SS-Green Light Racing (2)
4th) B.J. McLeod Motorsports, Jeremy Clements Racing, Kaulig Racing (1)
2020 LASTCAR XFINITY SERIES MANUFACTURER'S CHAMPIONSHIP
1st) Chevrolet (15)
2nd) Toyota (9)
2020 LASTCAR XFINITY SERIES DRIVER'S CHAMPIONSHIP 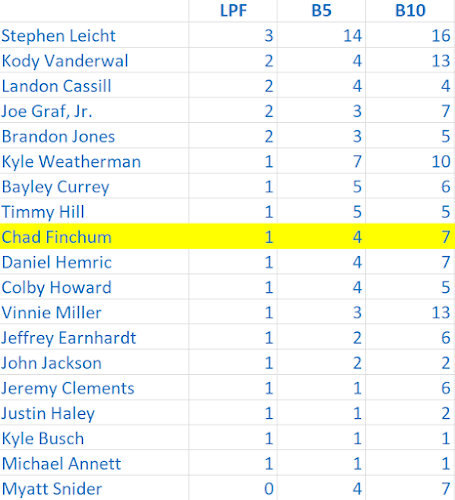