XFINITY: Bristol race hotly contested at both ends of the field as Stephen Leicht edges several drivers for last place

Stephen Leicht picked up the 8th last-place finish of his NASCAR XFINITY Series career in Friday’s Food City 300 at the Bristol Motor Speedway when his #66 CrashClaimsR.us Toyota fell out with clutch issues after 11 of 300 laps.

The finish, which came in Leicht’s 154th series start, was his series-leading fourth in 2020 and his first since Kansas, nine races ago. In the XFINITY Series’ last-place rankings, it was the 9th for clutch issues, the 13th for the #66, and the 143rd for Toyota. Across NASCAR’s top three series, it was the 69th from clutch problems, the 78th for the #66, and the 346th for Toyota.
In so doing, Leicht scored the third consecutive last-place finish for Motorsports Business Management in the XFINITY Series, one each with the team’s three drivers. Last week, Chad Finchum was disqualified in the first race while Timmy Hill exited early in the second.
Like his two teammates, Leicht has enjoyed some solid runs when not on “start-and-park” duty for MBM. Following the short race in Kansas, he finished 22nd and 21st in back-to-back road course races at Road America and the Daytona infield road course, backing up his 21st-place run on the Indianapolis Grand Prix Circuit in July. Just last week in Richmond, he matched his best oval finish of the year by taking 22nd on Saturday, matching his run in the first round of the Dover double-header. Leicht’s run was also a solid effort for the MBM team, who repaired an axle issue in the first Richmond race to recover in Race 2.
For Bristol, Leicht drew the 36th and final starting spot in Friday’s field, and would run the #66 for the first time since Darlington, where he ran a “throwback” scheme honoring MBM team owner Carl Long. In place of the Darlington car, Leicht would run the same gold-and-white Toyota Camry that Timmy Hill ran in both XFINITY races last week. While 22nd-place Bayley Currey incurred a tail-end penalty after his #74 Back The Blue Chevrolet was docked for unapproved adjustments, Leicht was still the last car across the stripe at the start, already trailing by open track.
While Leicht would ultimately take the last spot, he did not go unchallenged. On Lap 5, Brett Moffitt made an unscheduled stop for a flat tire on his #02 Robert B. Our Co. Chevrolet and was back up to speed on the apron on Lap 8. Meanwhile, on Lap 6, Dexter Bean was given the black flag by NASCAR for a start violation, dropping his #90 Sleep Well / Alpha Prime Chevrolet off the lead lap. Thus, by Lap 10, Moffitt had taken over last place, two laps down, with Bean in 35th, one down.
Also on the 10th circuit, race leader Ross Chastain got under the now 34th-place Leicht off Turn 4 and put him a lap down. The next time by, Kyle Weatherman made a pit stop in his #47 Honor And Sacrifice Chevrolet, also costing him laps to the leader. Trouble again found Moffitt on Lap 12 for a second flat tire, and this time he was penalized for taking on fuel before the Lap 40 competition caution. By Lap 14, Bean was now in last place, three laps down, with Weatherman two down in 35th and Moffitt also two down in 34th. Soon after this, Leicht, who was one down in 33rd, was first to pull behind the wall, and he took over last place for good on Lap 17.
Ultimately, just one of these challengers besides Leicht – Kyle Weatherman – ended up in the Bottom Five. Weatherman went behind the wall at least twice, both on Lap 64 and Lap 80, and ultimately ended up 32nd. In so doing, he first climbed past Myatt Snider, who went to the garage as late as Lap 68 and dropped out after completing just 31 laps in the #93 Superior Essex Chevrolet.
Completing the group were two drivers involved in a heavy crash. JD Motorsports teammates Jeffrey Earnhardt and B.J. McLeod made contact off Turn 4, putting McLeod’s #6 Chevrolet hard into the outside wall. The impact knocked McLeod into the path of one of the cars he owned – the #99 Koolbox Chevrolet of Vinnie Miller. The resulting collision ended both driver’s nights, though McLeod would be released from the care center and climbed atop his pit box to call the rest of the race. Tommy Joe Martins, whose #44 Gilreath Farms Red Angus Chevrolet spun into the inside wall during the aftermath, recovered to finish 24th.
The rest of the MBM team ran well in the race. Timmy Hill, driving another Toyota Camry sponsored by CrashClaimsR.us, earned four “Lucky Dogs” and finished 15th, his #13 the second car one lap down behind Ryan Sieg. Chad Finchum took 20th in a new-look paint scheme on his #61 with sponsorship from Garrison Homes and Toyota of Knoxville. Nearly joining the duo was Mike Harmon Racing’s Bayley Currey, who after his pre-race penalty was running 15th in the final 100 laps when something failed in the right-rear suspension, leaving him 30th.

LASTCAR STATISTICS
*This marked the first last-place finish for the #66 in an XFINITY Series race at Bristol.
*This was also the first time an XFINITY Series driver finished last with clutch issues since November 17, 2018, when Vinnie Miller’s #78 JAS Expedited Trucking Chevrolet dropped out after 10 laps of the Ford EcoBoost 300 at Homestead. 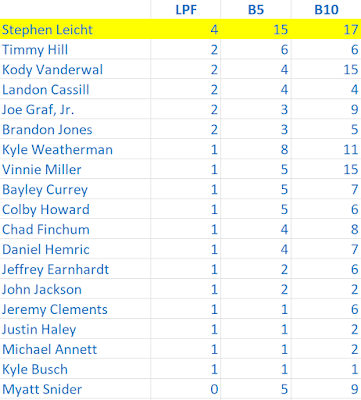