Trevor Bayne picked up the 1st last-place finish of his NASCAR Gander RV & Outdoors Truck Series career in Thursday’s UNOH 200 Presented by Ohio Logistics at the Bristol Motor Speedway when his #45 Proceller8 Chevrolet finished 5th, but was disqualified after completing all 200 laps.
The finish came in Bayne’s 3rd series start. In the Truck Series’ last-place rankings, it was the 3rd disqualification, the 4th for the #45, and the 394th for Chevrolet. Across NASCAR’s top three series, it was the 38th for the #45, the 39th by disqualification, and the 1,743rd for Chevrolet.
Josh Reaume picked up the 2nd last-place finish of his NASCAR Gander RV & Outdoors Truck Series career in Thursday’s UNOH 200 Presented by Ohio Logistics at the Bristol Motor Speedway when his #33 Colonial Countertops Toyota fell out with suspension failure after 9 of 200 laps.
The finish, which came in Reaume’s 46th series start, was his first of the season and first since March 29, 2019 at Texas, 35 races ago. In the Truck Series’ last-place rankings, it was the 8th for the #33, the 15th for suspension problems, and the 39th for Toyota. Across NASCAR’s top three series, it was the 51st for the #33, the 45th for suspension issues, and the 346th for Toyota.
It was the subject of controversy when Al Niece announced that Trevor Bayne, the 2011 winner of the Daytona 500, had replaced newcomer Ty Majeski as the driver of the #45 Chevrolet, effective last week in Richmond. Ever since Majeski’s spectacular last-place finish in this year’s Daytona opener, the Niece team as a whole had been struggling after losing support from GMS Racing and their title contender Ross Chastain committing to full-time XFINITY competition. Through the season’s 15th race at Darlington, Majeski had two Top Tens with a best of 8th in Charlotte, but most often finished between 13th and 19th.
Bayne, meanwhile, had been out of NASCAR since late in the 2018 season, when Matt Kenseth closed out the season in his Cup ride with Roush-Fenway Racing. Bayne then opened Mahalo Coffee, a cafe in his native Knoxville, Tennessee, and seemed to have put his racing career behind him. That soon changed this past summer, when Niece tabbed Bayne to drive his #40 at Darlington, appropriately, for “Throwback Weekend.” Despite a 27th-place finish, the aforementioned news that he’d replace Majeski soon followed. Bayne ran 29th in Richmond, then looked ahead to his home track in Bristol, where he’d start 24th.
Following the withdrawal of both CMI Motorsports entries following a two-truck tangle between teammates at Richmond, 36 drivers rolled off on Thursday night. Taking last on the grid was NEMCO Motorsports, which returned to the circuit for the first time in five races. Driving the #8 Advanced Collision Chevrolet was Camden Murphy, who was making his first Truck Series start of the year and his first-ever at Bristol.
Prior to the start, Josh Reaume dropped from 29th to the tail end of the field, moving Murphy up a row. On Lap 4, the spot fell to Cody Erickson, who began losing laps. Erickson was making his first series start in over five years, and took the wheel of Dawson Cram’s #41 Magnum Contracting Chevrolet. Meanwhile, Reaume lost his first lap on the 6th circuit, at which point he ran 35th ahead of Erickson. Under the first caution for debris on Lap 8, Reaume pulled behind the wall, and Erickson returned before the end of Stage 1 to drop the #33 to last place. Reaume was declared out near the end of Stage 2.
Also declared out with Reaume was Norm Benning, who pulled his #6 H&H Transport Chevrolet behind the wall on Lap 50 after he lost his first lap around the seventh time by. Ultimately, he was declared out with suspension issues. Austin Wayne Self took 34th after he crossed the nose of Austin Hill heading into Turn 1, putting the #22 Go Texan / AM Technical Solutions Chevrolet into the outside wall. Stewart Friesen took 33rd after he lost power, then several laps, running on the apron for much of Stage 1 in his #52 Halmar “Racing To Beat Hunger” Toyota. He ended up on the same lap as Codie Rohrbaugh, who originally closed out the Bottom Five following brake issues on his #9 Pray For Joshua Chevrolet.
Bayne, meanwhile, turned in an impressive race. While he didn’t place in either of the two stages, he climbed into the Top 10 in the final laps and crossed the stripe in 5th – far and away the best finish of the year for the #45 team. But hours later, NASCAR Officials reported Bayne’s truck failed the height sticks in post-race inspection, resulting in an immediate disqualification. The DQ dropped Bayne to last behind Reaume and knocked Rohrbaugh back out of the Bottom Five.
LASTCAR STATISTICS
*This marked the first last-place finish by disqualification for the Truck Series at Bristol, and ties Ross Chastain’s DQ at Iowa last year - also in a Niece truck - for most laps complete by a DQ in the series.
THE BOTTOM FIVE
36) #45-Trevor Bayne / 200 laps / disqualified
35) #33-Josh Reaume / 9 laps / suspension
34) #6-Norm Benning / 38 laps / suspension
33) #22-Austin Wayne Self / 153 laps / crash
32) #52-Stewart Friesen / 167 laps / running
2020 LASTCAR TRUCK SERIES OWNER'S CHAMPIONSHIP
1st) Reaume Brothers Racing (4)
2nd) Niece Motorsports, Norm Benning Racing, ThorSport Racing (2)
3rd) CMI Motorsports, DGR-Crosley, FDNY Racing, Halmar Friesen Racing, Jennifer Jo Cobb Racing, Spencer Davis Motorsports (1)
2020 LASTCAR TRUCK SERIES MANUFACTURER'S CHAMPIONSHIP
1st) Chevrolet (10)
2nd) Ford (4)
3rd) Toyota (3)
2020 LASTCAR TRUCK SERIES DRIVER'S CHAMPIONSHIP 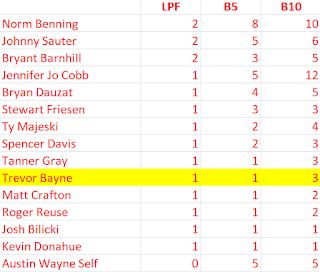