Ricky Stenhouse, Jr. picked up the 8th last-place finish of his NASCAR Cup Series career in Saturday’s Bass Pro Shops NRA Night Race at Bristol when his #47 Kroger Chevrolet was involved in an accident after 28 of 500 laps.
The finish, which came in Stenhouse’s 285th series start, was his third of the season and first since Kansas, ten races ago. In the Cup Series’ last-place history, it was the 33rd for the #47, the 604th from a crash, and the 795th for Chevrolet. Across NASCAR’s top three series, it was the 50th for the #47, the 1,225th from a crash, and the 1,744th for Chevrolet.
Stenhouse has continued to struggle with consistency in the 2020 season, at times impressing with strong finishes after a series of poor performances. Just after the last-place run in Kansas, he took 14th at Loudon, his best finish at the track in three years. After a 32nd-place finish in the first round of the Michigan double-header, he then took three consecutive finishes of 19th or better, capped by a 10th at Dover. He very nearly had another strong run last week at Richmond, working his way into the Top Ten during the early laps, but bad luck struck once more, leaving him 18th. For Bristol, Stenhouse would take 21st.
Rolling off 40th and last was Garrett Smithley in the #78 Major Appliance Chevrolet, signaling the return of B.J. McLeod’s Cup effort for the first time since the other concrete oval in Dover. He’d be joined at the rear by 27th-place Bubba Wallace in the #43 Cash App Chevrolet and 30th-place Corey LaJoie in the #32 Schluter Systems Ford for unapproved adjustments, a driver change in the #15 Thriv5 Chevrolet as 32nd-place J.J. Yeley took the place of Brennan Poole for the first time this year, and two technical infractions each for three of the four Joe Gibbs Racing teammates: 9th-place Kyle Busch in the #18 Skittles Toyota, 7th-place Denny Hamlin in the #11 FedEx Toyota, and 20th-place Erik Jones in the #20 Auto-Owners Insurance Toyota.
Ultimately, at least one more driver would drop to the rear as James Davison surrendered 35th before the start in his #53 Racing For Heroes Ford. When the race started, Smithley was still back there with him behind the penalized starters, and pulled ahead of the #53 as the field crossed the stripe. By Lap 3, Davison had pulled ahead of his teammate Joey Gase in the #51 Bare Arms Gear Ford. Gase was soon a full ten seconds back of the leader, and by Lap 9 was swallowed up by the leaders as the first car one lap down. He lost another lap by the 16th circuit.
On Lap 18, Yeley took over last place after an apparent unscheduled pit stop, and he was seen pulling up from the apron to rejoin the pack. Initially shown four laps down, scoring reset to show his #15 three down, but the leaders soon caught and put him four down once more. He was on the verge of losing a fifth lap when the first caution fell on Lap 29.
Heading down the backstretch, Stenhouse was sizing up Jimmie Johnson’s #48 Ally Chevrolet in a battle for 16th while also working around the lapped Gase, who pulled to the high lane. Halfway down the straight, Johnson and Stenhouse made contact, hooking the #47 straight into the inside wall. The impact caused a fluid leak, and NASCAR told him to run the apron as he pulled into the garage. A small fire ignited behind the battered left-front, then went out by the time he reached the entrance. The car couldn’t turn, so he climbed out and the #47 was towed to the garage. Done for the night under the “Damaged Vehicle Policy,” Stenhouse took last from Yeley on Lap 33. NASCAR officially declared him out on Lap 55.
Taking 39th was Josh Bilicki, whose #7 Insurance King Chevrolet slowed abruptly, then pulled behind the wall on Lap 67, citing a loss of power. He pulled up to the Tommy Baldwin Racing hauler and the crew hooked up the computer, where they soon diagnosed a fuel pump issue. While the secondary pump was functioning, the primary was out, and on Lap 107, the team took the tires off the car and prepared to load up. NASCAR reported he was out on Lap 112, just as Reed Sorenson pulled behind the wall with a similar issue on the #77 BetterForYourHealth.com Chevrolet. Sorenson’s crew also hooked up the computer and managed to get him back on track around Lap 251. Sorenson was ultimately involved in one more accident before he fell out with the electrical issue, taking 36th.
The first of the two cars Sorenson passed before his retirement was William Byron, who rear-ended another car while running inside the Top 10, knocking his #24 Liberty University Chevrolet out of the race, and the Playoffs. Timmy Hill took 37th, citing steering issues on his #66 RoofClaim.com Toyota.
LASTCAR STATISTICS
*This marked the first last-place finish for the #47 in a Cup points race at Bristol.
THE BOTTOM FIVE
40) #47-Ricky Stenhouse, Jr. / 28 laps / crash
39) #7-Josh Bilicki / 53 laps / fuel pump
38) #24-William Byron / 232 laps / crash
37) #66-Timmy Hill / 313 laps / steering
36) #77-Reed Sorenson / 317 laps / electrical
2020 LASTCAR CUP SERIES OWNER'S CHAMPIONSHIP
1st) JTG-Daugherty Racing (7)
2nd) Rick Ware Racing (5)
3rd) Motorsports Business Management (4)
4th) Chip Ganassi Racing, Hendrick Motorsports, Penske Racing (2)
5th) Beard Motorsports, B.J. McLeod Motorsports, Front Row Motorsports, Joe Gibbs Racing, Leavine Family Racing, StarCom Racing, Tommy Baldwin Racing (1)
2020 LASTCAR CUP SERIES MANUFACTURER'S CHAMPIONSHIP
1st) Chevrolet (19)
2nd) Toyota (6)
3rd) Ford (4)
2020 LASTCAR CUP SERIES DRIVER'S CHAMPIONSHIP 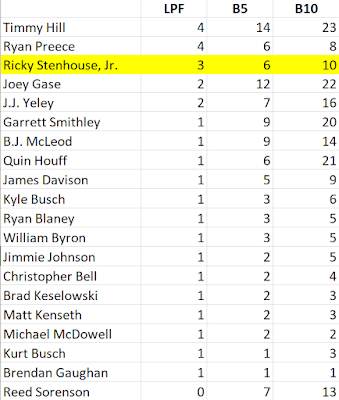