Chad Finchum picked up the 1st last-place finish of his NASCAR Cup Series career in Sunday’s South Point 400 at the Las Vegas Motor Speedway when his #49 LasVegas.net Toyota fell out with overheating issues after 19 of 268 laps.
The finish occurred in Finchum’s 2nd series start. In the Cup Series’ last-place rankings, it was the 30th for the #49, the 117th from overheating, and the 165th for Toyota. Across NASCAR’s top three series, it was the 58th for the #49, the 176th for overheating problems, and the 347th for Toyota.
Las Vegas was significant for Finchum as it would mark his first Cup Series start since 2018, when he drove Motorsports Business Management’s #66 Concrete North / Smithbilt Homes Toyota to a 33rd-place finish at Bristol. After more than two years of steady improvements driving each of MBM’s three XFINITY entries, he was entered in this year’s Daytona 500, running alongside Timmy Hill in the #49 Garrison Homes Toyota. Unfortunately, Finchum’s first appearance in the Bluegreen Vacation Duels only yielded a 20th-place finish, and he missed the field.
In addition to Saturday’s XFINITY race, where he ran 35th in MBM’s “start-and-park” #66, Finchum would run Sunday in the same “throwback” scheme that Hill ran earlier this month at Darlington, though with a couple changes. LasVegas.net logos would be on the quarter-panels and the car number changed from Hill’s #66 to Finchum’s #49. The result marked the first time since May 11, 2019 that the Carl Long-owned team had two Cup cars in the field for a points-paying race. Finchum drew the 39th and final starting spot.
No teams dropped to the rear before the start, and Finchum crossed the stripe 3.85 seconds back of the lead, three-tenths back of Josh Bilicki in Rick Ware Racing’s #53 Dollar Loan Center Chevrolet. Finchum closed within one-tenth of Bilicki for the spot, but by Lap 4 reported that Bilicki was leaking fluid. The message was relayed to NASCAR, who didn’t observe any fluid and didn’t throw the caution. Meanwhile, Finchum dropped further back of Bilicki, from 1.109 seconds on Lap 6 to 1.446 seconds on Lap 9. Team radio for Finchum’s team wasn’t publicly available until Lap 12, when codes could be heard being punched into the scanner. By then, Finchum was being lapped, and the spotter was guiding him away from lapped traffic.
Then on Lap 14, Finchum suddenly radioed “engine’s coming down,” and he was urged to pit immediately. “It’s sputtering all over the track,” said the driver as the crew pulled tape off the grille. Finchum pulled back onto the track on Lap 16, by which point he lost his third lap as the leaders raced past him in the high lane. He merged into traffic, only for someone on the crew to shout “Fuck! Take it to the garage” on Lap 21. By Lap 23, NASCAR reported Finchum had pulled into the garage, and the team prepared to hook up the computer from teammate Timmy Hill’s #66 to diagnose an engine issue.
But then, no more than 15 seconds later, NASCAR reported “66 to the garage, mechanical.” Hill’s #66 CrashClaimsR.us Toyota had just joined his teammate in the garage, citing a right-side axle and driveplate issue. At the time, Hill was exactly one lap ahead of Finchum, both in the final two running positions. On Lap 28, Finchum was told “Chad, get out, we’re done,” and NASCAR confirmed Finchum was out on Lap 34. Hill’s team thought about waiting until the end of Stage 1 to return to action, but completed repairs on the axle on Lap 63, when their car returned to action 45 laps down. Hill only climbed to 37th before rear end trouble ended his night. The only car Hill passed was Tyler Reddick, whose #8 CAT Mining Chevrolet was involved in two incidents before he fell out with heavy right-front damage.
After reports of his car leaking in the early laps, Josh Bilicki finished 36th, out with suspension issues. Joey Gase, Bilicki’s teammate in the #51 Nevada Donate Life Ford, rounded out the Bottom Five as the final car under power.
Ill-timed cautions for the leaders brought several drivers into the mix for the lead, including Michael McDowell, Christopher Bell, Chris Buescher, John Hunter Nemechek, and Corey LaJoie. In the chaos that followed, only Buescher managed to defend his spot inside the Top 10, taking 9th in the #17 Sunny D Ford. The same sequence also led to the lead battle between Kurt Busch, who took the checkered flag ahead of Matt DiBenedetto. DiBenedetto finished 2nd in both Cup races at Las Vegas this year, tying his career-best runner-up finish from Bristol last summer.
LASTCAR STATISTICS
*This marked the first last-place finish for the #49 in a Cup Series race at Las Vegas since March 11, 2012, when J.J. Yeley’s #49 America Israel Racing Toyota, fielded by Jay Robinson and Troy Blakeney, dropped out after 39 laps with engine failure.
*This was also the first time a Cup Series last-place finisher at Las Vegas fell out due to overheating issues.
THE BOTTOM FIVE
39) #49-Chad Finchum / 19 laps / overheating
38) #8-Tyler Reddick / 157 laps / crash
37) #66-Timmy Hill / 160 laps / rear end
36) #53-Josh Bilicki / 227 laps / suspension
35) #51-Joey Gase / 256 laps / running
2020 LASTCAR CUP SERIES OWNER'S CHAMPIONSHIP
1st) JTG-Daugherty Racing (7)
2nd) Motorsports Business Management, Rick Ware Racing (5)
3rd) Chip Ganassi Racing, Hendrick Motorsports, Penske Racing (2)
4th) Beard Motorsports, B.J. McLeod Motorsports, Front Row Motorsports, Joe Gibbs Racing, Leavine Family Racing, StarCom Racing, Tommy Baldwin Racing (1)
2020 LASTCAR CUP SERIES MANUFACTURER'S CHAMPIONSHIP
1st) Chevrolet (19)
2nd) Toyota (7)
3rd) Ford (4)
2020 LASTCAR CUP SERIES DRIVER'S CHAMPIONSHIP 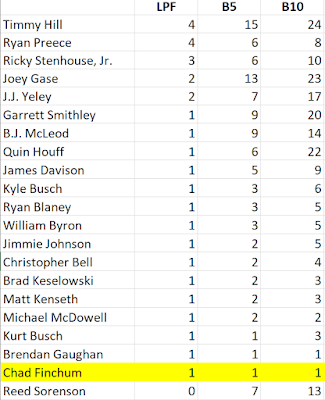