by William Soquet
LASTCAR.info Guest Contributor
Wayne Peterson finished last for the 46th time in his ARCA Menards Series career in Saturday’s Toyota 200 at Winchester Speedway when his #0 GreatRailing.com Chevrolet retired after 2 of the race’s 200 laps.
The finish was Peterson’s second consecutive, and came in his 113th series start.
After his last-place finish at Bristol, Peterson made the journey to Winchester, Indiana, where he was also on the entry list. The 82-year-old was one of a mere fourteen drivers on the grid, which also included teammate Con Nicolopoulos. Bristol winner Sam Mayer and his GMS Racing team did not enter, as the Winchester event was not a part of the Sioux Chief Showdown. Chandler Smith also took the race off, although the Venturini Motorsports #20 car still ran, albeit with driver Jesse Love. Eric Caudell was a late add to the entry list, making the #7’s third appearance of 2020. Fast Track Racing was back to fielding three cars, with Mike Basham in the 10 car, Rick Clifton in the 11 car and Owen Smith in the 12 car.
As ARCA was the main attraction at Winchester, there was a full slate of practice and qualifying. Peterson turned three laps and was the slowest, clocking in a fastest lap of about 22 seconds. Unfortunately, this was about six seconds off Ty Gibbs’ fastest lap of just under 16 seconds. Qualifying was much the same story, with the top four cars breaking the sixteen-second barrier. Con Nicolopoulos was the slowest car to take a time in qualifying, running a lap of 19.3 seconds. However, Peterson did not take a time and was awarded the 14th position on the grid.
On the MAVTV broadcast, the final row was filled with two white-colored cars, presumably Nicolopoulos and Peterson. By lap seven, Peterson was listed as “out”, securing his second last-place finish of the year. Owen Smith ended his race after only four laps, finishing 13th. After spinning early in the race, Hailie Deegan found the outside wall on Lap 111 and retired from the resultant damage. Rick Clifton, after qualifying ninth, ran the whole race and finished 11th, 32 laps down. Nicolopoulos rounded out the Bottom Five with his first career top-ten finish, finishing 30 laps down in tenth.
Just outside the Bottom Five was Brad Smith, who claimed his first ARCA top-ten in his 363rd ARCA start. While that deservedly drew much attention on social media, two other career-bests highlighted underdog teams in the field. Eric Caudell joined Nicolopoulos and Smith in the top-ten for the first time, and Mike Basham finished seventh, his first time finishing higher than tenth in a strong home-state race.
With his second last-place finish of the season, Peterson moved into second place in the LASTCAR drivers’ standings. He made a late-season charge in 2019 to claim the drivers championship, and has more than enough time to do so in 2020, as well, with three races remaining on the schedule.
THE BOTTOM FIVE
14) #0-Wayne Peterson / 2 laps / valve spring
13) #12-Owen Smith / 4 laps / brakes
12) #4-Hailie Deegan / 109 laps / crash
11) #11-Rick Clifton / 168 laps / running
10) #06-Con Nicolopoulos / 170 laps / running
2020 LASTCAR ARCA MENARDS SERIES MANUFACTURERS CHAMPIONSHIP
1st) Chevrolet (11)
2nd) Toyota (5)
3rd) Ford (1)
2020 LASTCAR ARCA MENARDS SERIES OWNERS CHAMPIONSHIP
1st) Fast Track Racing (8)
2nd) Wayne Peterson Racing (4)
3rd) Brother-In-Law Motorsports, DGR-Crosley, Kimmel Racing, Reeves Racing, Russ Lane Racing (1)
2020 LASTCAR ARCA MENARDS SERIES DRIVERS CHAMPIONSHIP 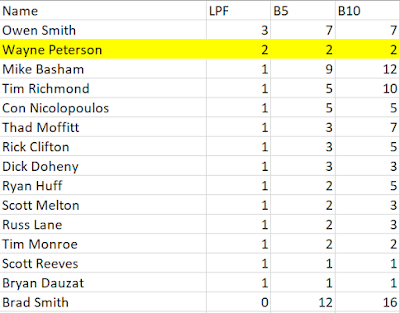