by William Soquet
LASTCAR.info Guest Contributor
Rick Clifton finished last for the first time in his ARCA Menards Series career in Saturday’s Royal Truck & Trailer 200 at Toledo Speedway when his #11 Asheville Propane Ford retired with brake problems after completing three of the race’s 200 laps.
The finish came in Clifton’s 42nd career start.
The 66-year-old Rick Clifton is an eleven-year veteran of the ARCA Racing Series. He got his start with Andy Hillenburg’s Fast Track Racing in 2010, running two races with the team. Between Fast Track and James Hylton Motorsports, Clifton ran a few races a year, and made it to the finish in most of them. In 2015, he picked up backing from Ohio Ag Equipment and Asheville Propane, running a career-high seven races that year. The Ohio Ag Equipment sponsorship disappeared at the beginning of 2020, but like he has done in the past, Clifton is still running a partial schedule. He finished in the top ten for the first time at the first Toledo race this year, a small but important victory in his 40th career start.
The Royal Truck & Trailer 200 marked the first combination race for the ARCA Menards Series. Previously, the NASCAR K&N Pro Series had run combination events at tracks like Iowa Speedway and World Wide Technology at Gateway. However, in the shuffle of rescheduling this year, a new type of combination event was born: the ARCA Menards Series / ARCA Menards Series East Combination Race. As such, a number of East regular teams entered, as all drivers entered earned points for both the national and East Series. Rev Racing entered its drivers, Nick Sanchez and Chase Cabre; Parker Retzlaff and his Bruce Cook Technologies team entered; Venturini Motorsports entered their East Series driver, Mason Diaz; and the part-time family teams of the East, Justin Carroll and “Farmer Bob” Pawlowski, also entered. As for the regular national series teams, it was about the usual entry list. Noticeably absent again was Thad Moffitt, whose next confirmed race is at Memphis, and Chad Bryant Racing, who will return at Bristol with Kris Wright and Derek Griffith.
All 19 cars on the entry list participated in practice, where eventual race winner Sam Mayer topped the charts with a lap that clocked in at just over sixteen seconds. Clifton was last on the charts, three and a half seconds behind Mayer and eight-tenths of a second behind 18th-place Owen Smith. Qualifying was about the same story: Mayer got just under the sixteen-second mark and Clifton barely broke the nineteen-second barrier, although the lap still left him in last place.
At the drop of the green, the nearly-identical cars of Clifton and Smith trailed the field. Clifton held last place flag-to-flag, falling ten seconds back of the leaders by the time he exited the race on lap four. Two Smiths were next to retire, with Owen retiring after five laps and Brad ending his race after 41 laps. The last two spots in the Bottom Five were filled by crash victims. Chase Cabre had what looked like a tire go down, leading to an early exit after 55 laps. Drew Dollar claimed he got dumped by Parker Retzlaff and promised words for the Wisconsin driver after the race, although it is unclear if an exchange ever happened.
With the finish, Clifton clinched the 2020 LASTCAR ARCA Owners Championship for Fast Track Racing with the team’s eighth last-place finish of the year. Wayne Peterson Racing is currently in second with two.
THE BOTTOM FIVE
19) #12-Rick Clifton / 3 laps / brakes
18) #11-Owen Smith / 5 laps / electrical
17) #48-Brad Smith / 41 laps / overheating
16) #4E-Chase Cabre / 55 laps / crash
15) #15-Drew Dollar / 86 laps / crash
2020 LASTCAR ARCA MENARDS SERIES MANUFACTURERS CHAMPIONSHIP
1st) Chevrolet (9)
2nd) Toyota (5)
3rd) Ford (1)
2020 LASTCAR ARCA MENARDS SERIES OWNERS CHAMPIONSHIP
1st) Fast Track Racing (8)
2nd) Wayne Peterson Racing (2)
3rd) Brother-in-Law Motorsports, DGR-Crosley, Kimmel Racing, Reeves Racing, Russ Lane Racing (1)
2020 LASTCAR ARCA MENARDS SERIES DRIVERS CHAMPIONSHIP 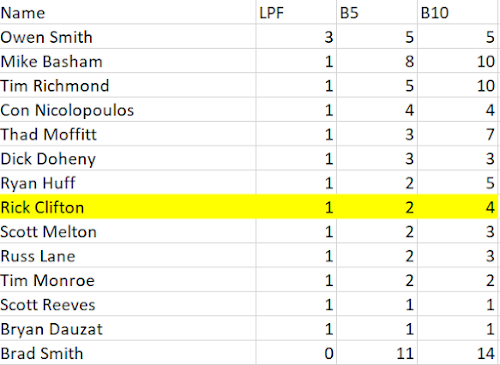