Tim Monroe scored the first last-place finish of his ARCA Menards Series career in Saturday’s Zinsser SmartCoat 200 at Lebanon I-44 Speedway when his #10 Fast Track Racing Chevrolet exited the race with brake problems after 4 of 200 laps.

Fast Track Racing crew member Tim Monroe has recently been given the opportunity to jump behind the wheel for the team in two events this season. The University of Northwestern Ohio student also races UMP modifieds at tracks like Shadyhill Speedway, Farmer City Raceway and Lincoln Speedway. He has been racing since at least the late 2000s, starting in small go-karts and working his way up through the ranks to outlaw karts and modifieds. He made his series debut for Andy Hillenburg’s Fast Track Racing (FTR) at the Daytona road course with an all-UNOH-student crew servicing his #11 machine. He did not complete a lap in the race due to electrical problems but was not credited with last place as Bryan Dauzat did not start the race and was scored in last.

This time around, thirteen other drivers joined Monroe for the first ARCA Menards Series race at Lebanon I-44 Speedway. Fast Track Racing kept its other two drivers the same as last week as Mike Basham piloted the #10 and last week's last-place finisher Owen Smith drive the #11. Perhaps the only surprising name to see on the entry list was road racer Kris Wright, as the former 24 Hours of Daytona driver was again entered in a Chad Bryant Racing Chevrolet. Hattori Racing Enterprises elected not to enter Max McLaughlin in the race, and Rev Racing did not enter any cars either. Thad Moffitt was once again absent from the list, leaving DGR-Crosley at two entries for the race. Despite Lebanon being a former track where the K&N Pro Series West raced, Bill McAnally Racing did not make the trip out to Missouri with its fleet of three entries. Not formally included on the entry list was former ARCA underdog and winner Brandon McReynolds, who is serving as a driver coach for Taylor Gray after helping Noah Gragson find success in NASCAR.

As the ARCA Menards Series was not racing with any national series at Lebanon, there was a full slate of practice and qualifying. Owen Smith put his machine 14th on the chart, about 2.5 seconds behind practice leader Hailie Deegan. Monroe then took the bottom spot in qualifying, running a lap of 17.4 seconds. He was not quite three seconds behind polesitter Bret Holmes.

At the drop of the green, Monroe was the last car in the running order. He was nine seconds back after two laps, and retired after four laps. Owen Smith avoided going 4-for-4 on career starts and last-place finishes by finishing 12th. He completed 39 laps before dropping out with brake issues. Brad Smith finished in between the two as the only other car to retire, citing handling as his reason out with 35 laps complete. Tim Richmond was the last car running in 11th, ten laps in arrears at the remainder of the race. Mike Basham completed the Bottom Five, finishing seven laps down.

Just outside the Bottom Five was Chandler Smith, who had what can be described as the "No Good, Terrible, Very Bad Lebanon Race." After Hailie Deegan spun him in turn one early in the race, Smith limped around a full circuit on a cut tire, damaging the front suspension. He spun again avoiding another Deegan incident, and fell two laps down. While running arguably the same time as the leaders, Smith was turned by Bret Holmes, a move that the Venturini Motorsports driver claimed came from crew chief Shane Huffman. Holmes did not directly refute the claim. An incident with Kris Wright later meant that Smith “hit for the cycle” and lost a total of two laps for repairs, the latest in a string of frustrating races between ARCA and the NASCAR Truck Series for Smith. 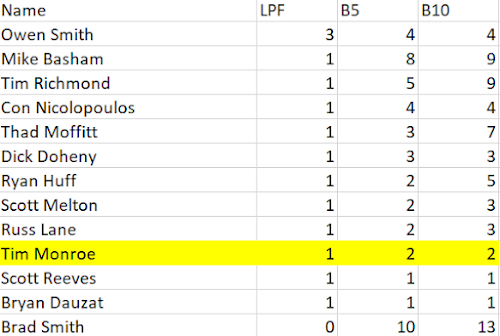