by William Soquet
LASTCAR.info Guest Contributor
Wayne Peterson finished last for the 45th time in his ARCA Menards Series career in Thursday’s Bush’s Beans 200 at Bristol Motor Speedway when his #0 GreatRailing.com Chevrolet retired after two of the race’s 200 laps.
The finish came in Peterson’s 112th series start, and was his first since Kansas in 2019, seventeen races ago.
Wayne Peterson, now 82 years of age, has continued to field one of the longest-running ARCA teams in 2020. The full-time #06 retained Tim Richmond as primary driver, with Con Nicolopoulos piloting the car in select events. Nicolopoulos has been, up until Bristol, the sole driver of the part-time #0 entry that ran at marquee events. The Wayne Peterson Racing team is the epitome of what it means to be ARCA: with funding that doesn’t stack up to Cup-affiliated teams like Joe Gibbs Racing, the team still shows up and competes at every single race on the schedule, including a tough Thursday-Saturday doubleheader this week at Bristol and Winchester. The group received a little extra recognition on Thursday from one of the most prominent figures in the garage:

In the first ARCA race at Bristol in 51 years, 27 cars answered the call. It was the largest car count for the East Series this year, and the second-largest car count for the national series. The regular East Series contingent included Parker Retzlaff, Nick Sanchez, Chase Cabre, Mason Diaz, Justin Carroll, Max McLaughlin and Chuck Buchanan Jr. Fast Track Racing filled its 10 and 11 cars with Mike Basham and Owen Smith, and let Chad Bryant Racing use the owner points of the 12 car for a second entry, used to field Kris Wright. Derek Griffith ran CBR’s trademark #22 car. A number of ARCA part-timers emerged, including Gus Dean and Win-Tron Racing, Kyle Sieg and his RSS Racing/Cook Racing Technologies car, and Dave Mader III with his team. Con Nicolopoulos took the place of Tim Richmond in Wayne Peterson Racing’s #06 car for this race. Rounding out the field was the only series debut entered, Max Gutierrez. Gutierrez’s #53 entry showed up with little to no fanfare. It was owned by Troy Williams, and the car was a former Mason Mitchell Motorsports and Vizion Motorsports chassis.
Rain washed out the prospective practice on Thursday afternoon, but that had no bearing on the starting lineup, as it was released shortly after the entry list. Due to this being Troy Williams’ first attempt as an owner in 2020, Gutierrez was slated to start in the 27th and final spot. Buchanan later withdrew, citing rain as a factor. Additionally, the Chad Bryant Racing crew had trouble on the Kris Bryant car, as it would not fire until the one-to-go lap.
By the drop of the green, however, the 12 car had joined the field, and Peterson and Gutierrez were noticeably slow, with both stopping on track around lap three. Peterson was able to go to the garage, ending his race; Gutierrez was able to make repairs on pit road and continue on, eventually finishing 14th.
Brad Smith was the next car to retire, as a spin off the bumper of Ty Gibbs ended his evening. Mike Basham retired after 34 laps complete, and a hard crash into the outside wall landed Chandler Smith a Bottom Five finish only 71 laps into the race. It has been nothing short of a brutal recent stretch of races in the ARCA Menards Series for Smith, who had a bushel of problems at Lebanon as well. Owen Smith finished 22nd, the victim of a car that leaked fluid on the racetrack and took him out of the race.
By virtue of Peterson’s finish, Chevrolet clinched the 2020 LASTCAR ARCA Manufacturers’ Championship.
THE BOTTOM FIVE
26) #0-Wayne Peterson / 2 laps / unknown
25) #48-Brad Smith / 33 laps / unknown
24) #10-Mike Basham / 34 laps / unknown
23) #20-Chandler Smith / 71 laps / unknown
22) #11-Owen Smith / 97 laps / unknown
2020 LASTCAR ARCA MENARDS SERIES MANUFACTURERS CHAMPIONSHIP
1st) Chevrolet (10)
2nd) Toyota (5)
3rd) Ford (1)
2020 LASTCAR ARCA MENARDS SERIES OWNERS CHAMPIONSHIP
1st) Fast Track Racing (8)
2nd) Wayne Peterson Racing (3)
3rd) Brother-In-Law Motorsports, DGR-Crosley, Kimmel Racing, Reeves Racing, Russ Lane Racing (1)
2020 LASTCAR ARCA MENARDS SERIES DRIVERS CHAMPIONSHIP 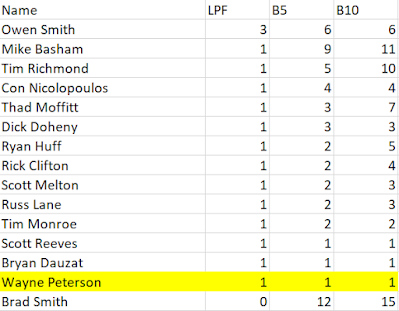 3 drivers with the same last name all finished in the bottom 5, and none of them are related if memory serves correctly. That's got to be a record, or at least an interesting stat.